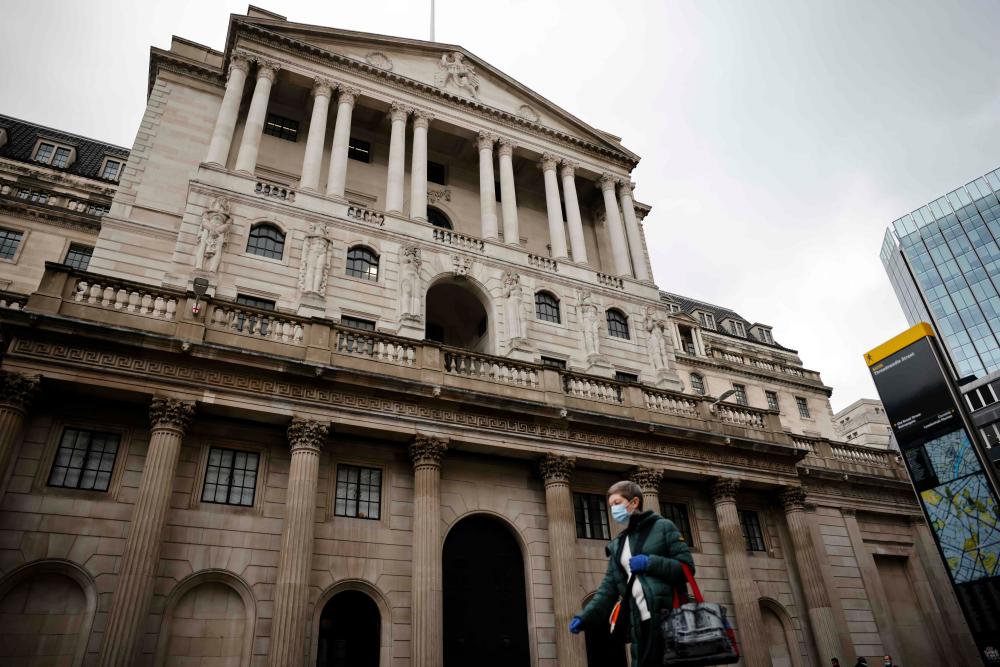 The Bank of England says Britain's economy will probably contract again by 4% in the first three months of 2021. – Reuters

LONDON: The Bank of England (BoE) gave British lenders at least six months' breathing space on Thursday before negative interest rates are a possibility, focusing instead on the prospects for a post-lockdown rebound in a quarterly update on the economy.

The pound gained a cent against the US dollar and 10-year British government bond yields hit their highest since March as investors interpreted the BoE's comments as kicking negative rates into the long grass, at least for now.

The British central bank said it would ask lenders to get ready for the possibility of sub-zero rates, but told investors not to view them as a foregone conclusion.

"My message to the markets is you really should not try to read the future behaviour of the MPC from these decisions and these actions we're taking on the toolbox," governor Andrew Bailey told a news conference.

Most British businesses are hobbled by the third national lockdown since the pandemic struck last year, when the economy shrank by an estimated 10%. Many firms are also grappling with post-Brexit barriers to trade with the European Union.

Britain's economy will probably contract again by 4% in the first three months of 2021, the BoE said.

But, helped by Britain's fast vaccination programme, it was expected to recover rapidly over the year and the BoE maintained its forecast that the economy would regain its pre-pandemic size by the first quarter of 2022 - earlier than most other forecasters say.

"On negative rates, while the BoE judges these are a practical option, they are unlikely to be needed by the time preparations are complete," Martin Beck, an economist with consultancy Oxford Economics, said.

As expected, the BoE maintained its Bank Rate at 0.1% and left the size of its total asset purchase programme at £895 billion (RM4.56 trillion).

Bailey said the economy might perform better than the BoE expects with many richer households sitting on high levels of pent-up savings after spending so much time stuck at home.

The BoE said it was working on developing a new message for investors and businesses about when it might start to tighten monetary policy, should it be needed.

The central bank said in 2018 it would not start to sell down its stockpile of bonds until interest rates had hit about 1.5%. But since then, the BoE has doubled its holdings.

Bailey said there was a "range of views" about how to respond to requests from banks for more time to get ready for any move to negative rates. The four external, non-staff members of the nine-strong Monetary Policy Committee (MPC) have sounded more open to cutting rates below zero.

The MPC has been divided about whether negative rates would make it unprofitable for banks to lend and ultimately hurt economic growth.

The European Central Bank, the Bank of Japan and other central banks have implemented sub-zero rates.

In Switzerland, big banks initially did not pass negative rates on to private and smaller corporate clients. But five years on, nearly all Swiss banks have passed on some charges to corporate and individual customers with large cash balances.

Sam Woods, a BoE deputy governor who heads the central bank's regulatory arm but does not have a vote on rates, said British banks could cope better with rates at zero.

Negative rates would pose the greatest challenge to lenders which had issued mortgages that track Bank Rate, as it could potentially lead to them having to pay interest to borrowers. – Reuters