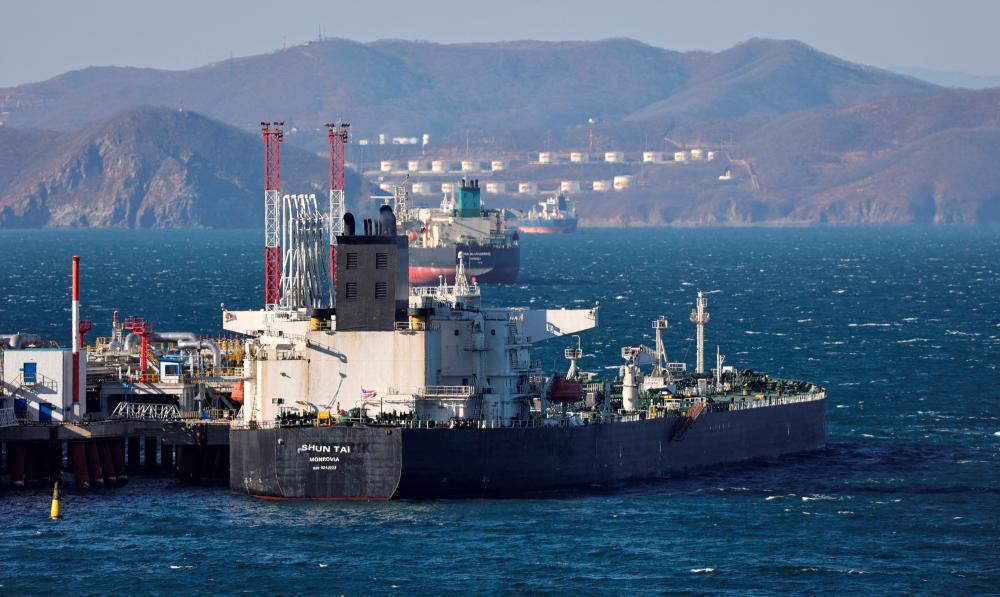 The crude oil tanker Shun Tai is seen anchored at the terminal Kozmino in Nakhodka Bay near the port city of Nakhodka, Russia, on Dec 4, 2022. – Reuterspic

NEW YORK: US oil prices fell in frenzied trading on Tuesday (Dec 6) to their lowest settlement levels this year, with Brent finishing below US$80 per barrel for the second time in 2022, as investors fled the volatile market in an uncertain economy.

Prices have dropped by more than 1% for three straight sessions, giving up most of their gains for the year. A string of bearish news has unnerved investors despite an ongoing war in Ukraine and one of the worst energy crises in recent decades.

“It’s been quite the three days – with Opec+ deciding not to further cut production on Sunday, the toothless start of the Russian price cap and sanctions Monday, and a rout in equity markets today, oil speculators are charging for the exits amid a flight from risk assets,” said Matt Smith, lead oil analyst at Kpler.

Service-sector activity in China has hit a six-month low, and European economies have slowed due to the high cost of energy and rising interest rates.

Tuesday’s slump was the largest daily decline in Brent prices since late September, which have traded in a US$62 range this year – their widest swing in a single year since the 2008 financial meltdown.

“We could be looking at US$60 a barrel WTI the way that things are going,” Eli Tesfaye, senior market strategist at RJO Futures said. “I think US$80s are going to be the new high, and I would be very surprised to see any higher than that.”

The oil market has also largely overlooked threats to supply, such as the one from a Group of Seven price cap of US$60 on Russian seaborne crude oil exports, which is likely to make the country cut its oil output.

Russia has said it will not sell oil to anyone who signs up to the price cap. Russia’s January-November oil and gas condensate production rose 2.2% from a year ago, according to Deputy Prime Minister Alexander Novak, who expects a slight output decline following the latest sanctions.

In China, more cities are easing Covid-19-related curbs, prompting expectations of increased demand in the world’s top oil importer, although that has not been enough to stop the bleed in oil futures.

“Oil markets will likely stay volatile in the near term, driven by Covid headlines in China and central bank policies in the US and Europe,” UBS analyst Giovanni Staunovo said. – Reuters