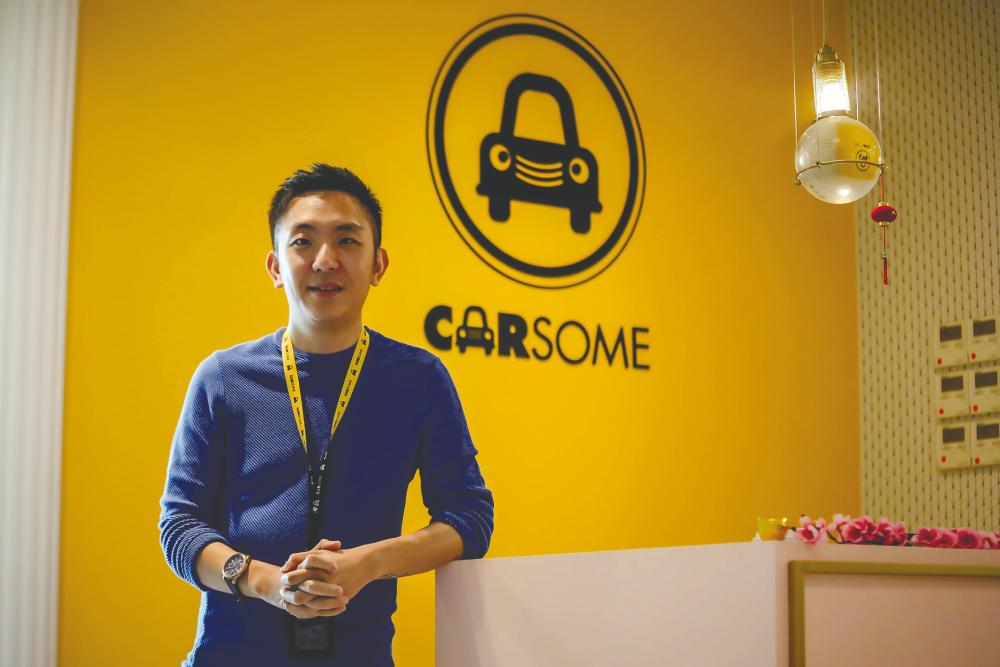 Cheng says the startup aims to grow its business aggressively and strives to double or triple the number of transactions. – ADIB RAWI YAHYA/THESUN

PETALING JAYA: The used-car market in Southeast Asia is highly fragmented as thousands of players operate in this chaotic segment, but leveraging on digital technology, used-car trading platform Carsome wants to corner a good chunk of the industry.

The startup’s founder and CEO, Eric Cheng, revealed that the platform currently has a penetration of 1% of the Southeast Asian used-car market, and aims to increase its share in the region to 5% within the next five years.

“There is a lot of room for us to grow and we have the benefit of greater awareness with our expansion, as more and more people know about us and our value proposition. The entire market, it is really fragmented and there is no other player that has managed to achieve a 1% share in the market apart from us,” he told SunBiz.

In Carsome’s main market, Malaysia, the startup has garnered an estimated 7% share.

“To reach 5% market share target in Asean, we aim to hit a double-digit market share in each and every country that we are in,” stated Cheng.

To finance its regional ambitions, Carsome raised US$50 million (about RM205 million) in its Series C round in December last year.

Cheng said that with the funding the platform aims to venture into ancillary services, such as insurance, financing and warranty as well as expand into direct-to-consumers from only used-car dealers.

“Basically, users can get everything when it comes to selling, buying and all the ancillary services within Carsome itself,” he said.

“Once we’ve completed the rollout for this year, we are likely to go ahead with a bigger fundraise to create an integrated vertical supply chain, an end-to-end marketplace with the platform.”

In 2019, Carsome achieved 40,000 transactions in the countries where it operates.

This year, Cheng said, the startup aims to grow its business aggressively and strives to double or triple the number of transactions.

The startup expects its operations in Indonesia and Thailand to join Malaysia in being profitable by the end of 2020.

For its operations in Indonesia, the strategy adopted by Carsome emphasises its expansion in Java, the economic powerhouse in the archipelago.

The CEO pointed out the island includes cities, such as Jakarta, Surabaya, Bandung, and Jogjakarta, which house the more digitally savvy demographic of Indonesia, as well as a bigger share of the car population.

“Although we are concentrating on car-selling services to the consumers in Java, we found that the demand for the cars is coming from everywhere else in Indonesia, from Sumatra island to Sulawesi.”

He explained that the country-wide demand has translated into a price advantage for its sellers in Java as they could leverage the demand from the entire country through the platform.

On the domestic front, Cheng said its nationwide expansion proved to be fruitful as it enabled it to tap into the need to sell a car and in turn this allowed the platform to secure more supply.

However, Cheng said the challenges brought on by Covid-19 have thrown a spanner into Carsome’s expansion as it has put on hold plans to enter the Philippines.

To mitigate the impact from the economic downturn brought on by the pandemic on big ticket items such as cars and property, the startup has introduced a RM55.5 million Carsome Dealer Alliance Support Program to boost the used-car industry by providing credit lines to assist dealers with cash flow and generate sales through advertising support.

Cheng explained that the programme was developed after its internal survey has found that 70% of used-car dealers in Malaysia have been affected by the Covid-19 pandemic. “The programme is timely as a short-term boost to help used-car dealers rebuild their businesses and finances through bonus rewards and credit lines,” he said.