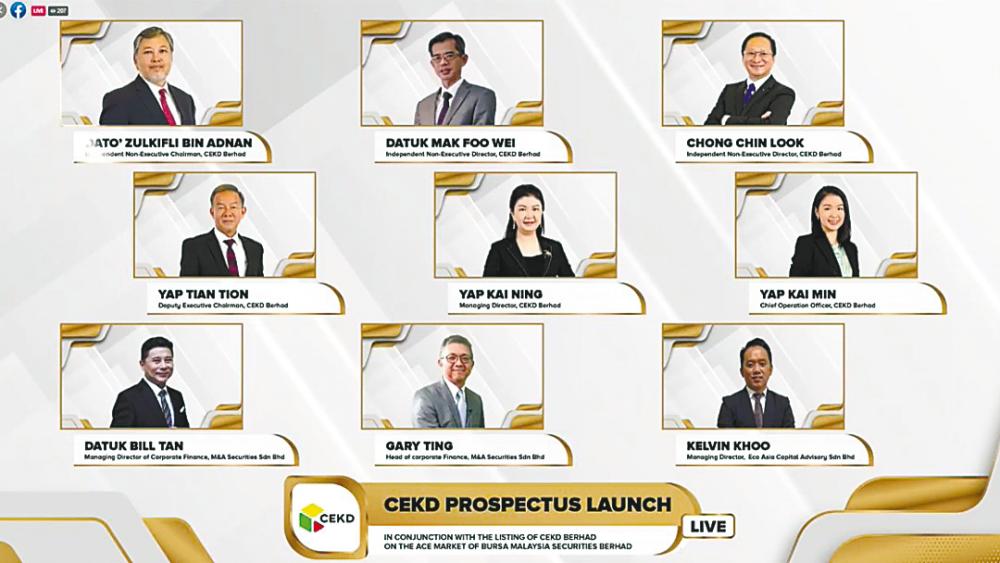 The company plans to use RM8.8 million or 36.2% raised from the initial public offering (IPO) proceeds for the acquisition of a factory at Kepong, Kuala Lumpur.

According to CEKD managing director Yap Kai Ning, the group has been renting three premises for its subsidiary Hotstar (M) Sdn Bhd. The acquisition of the factory is to take advantage of the upcoming growth in the die-cutting industry.

“The proceeds from the IPO will go towards acquiring laser-cutting machines and automatic steel rule processors to support business expansion and increase our production efficiency. Our production capability will be enhanced with the upgrading of our computer software and servers, and this will support business growth,“ she told reporters during the virtual launch of the group’s prospectus today.

Kai Ning said the group offers die-cutting solutions to produce boxes of different sizes for different functions, for instance, the usage of boxes ranging from for transportation and storage of large quantity of goods to individual usage.

“Many household products are produced using CEKD’s die-cutting solutions such as food and beverage and pharmaceutical products, namely, boxes for tissue paper, shoes, television as well as buttons on remote controls. Besides, parts and components produced with our die-cut mould are television panels, mobile phones, laptops, earphones, and hard disks.

Asked if the group is affected by the implementation of the various stages of the movement control orders (MCOs), CEKD COO Yap Kai Min said the group has been in operation since MCO 1.0 due to its status as an essential sector.

Under the listing exercise, CEKD is issuing 50.59 million new shares at an issue price of 48 sen per share.

When asked on the revision of issue price per share from 36 sen to 48 sen, M&A Securities Sdn Bhd head of corporate finance Gary Ting said CEKD would continue to have strong earnings in the near future.

“They are in a niche market of die-cutting manufacturing, not many listed companies on Bursa are doing similar activities such as CEKD. Another reason is their exposure on e-commerce... the e-commerce industry is vibrant now that it requires the use of shipping materials for packaging and parcels, CEKD is providing these products,“ he said.

CEKD will further utilise RM3 million and RM1.3 million or 12.4% and 5.4% for capital expenditure comprising the purchase of new machineries and to upgrade and development of computer software and server. RM4 million or 16.5% to repay bank borrowings, RM2.68 million or 11% for general working capital, RM3 million or 12.3% for listing expenses, and RM1.5 million or 6.2% for marketing activities.

As at Aug 6, the group has a large and diverse customer base totalling 1,309 customers while it achieved an average gross profit margin of 48.3% from FY2018 to FY2020.

M&A Securities is the adviser, sponsor, sole underwriter and placement agent of CEKD’s IPO. M&A Securities will be underwriting for shares available for application by the Malaysian public. MyTaman – the visitor self-service kiosk with a difference MyTaman – the visitor self-service kiosk with a difference

3.MyTaman – the visitor self-service kiosk with a difference

4.Emergency centre set up in Thailand to cope with monkeypox

5.Inflation low and under control due to subsidies, price controls: Mustapa