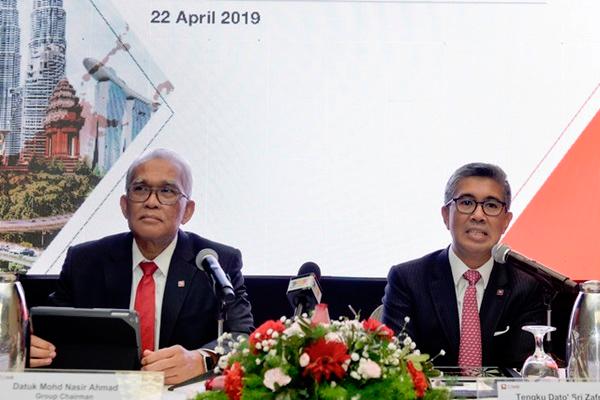 KUALA LUMPUR: CIMB Group Holdings Bhd, with at least three initial public offerings (IPOs) in the pipeline this year, is optimistic on the performance of the stock market despite the recent outflows.

“We are still quite optimistic (on the FBM KLCI). Obviously there is correction in terms of flows from the emerging markets but for Malaysia in general, I think we are still quite optimistic on the performance for the full year. So we are still maintaining our forecast for the economy to be around 4.5% to 4.7% and we are also looking at ringgit to strengthen to around 4.1,” group CEO Tengku Datuk Seri Zafrul Aziz told reporters at its AGM today.

He said the performance of the bond market is still positive year-to-date despite concerns over FTSE Russell possibly dropping Malaysian debt from the FTSE World Government Bond Index.

“The sell-off only happened recently, so it’s still a positive territory and more importantly is that now, with the level of engagement – when they start talking to the government, Bank Negara Malaysia and all the players – I’m sure they will agree that we should still be in the index.

“Of course investors being cautious they will take a wait-and-see approach, so there was some sell-off that happened but despite the sell-off, the year-to-date performance is still positive,” he added.

While CIMB is confident that FTSE Russell will not drop Malaysia from the index, Zafrul noted that there will still be some outflows over the next six months until FTSE Russell reaches a decision, as investors take on a cautious view and remain on the sidelines.

“But we’ve seen the worst already,” he said, adding that the earlier outflows were due to knee-jerk reactions and impact from market sentiment.

He said the FBM KLCI will “come back” as the market is very deep and in a worst case scenario, there are still many other benchmarks that investors can use.

“But the important thing is, the benchmark must be relevant and I think for Malaysia not to be there, it will not be a true benchmark, with Malaysia being quite a big player in the bond market,” he said.

On the three IPOs in its pipeline, Zafrul said these are within the consumer and infrastructure sectors, and the size of these IPOs will depend on valuations. The group was not involved in any IPOs last year.

The IPO market has been weak this year, with the recent postponement of QSR Brands (M) Holdings Bhd signaling market concern over the timing for listings. QSR had initially planned to raise up to RM2 billion via its IPO.

Meanwhile, the group has allocated a capital expenditure of RM900 million this year, as it aims to triple investments in IT and operations. This would lead to a flat return on equity of 12% by 2023.

The group maintained its loan growth of 6-7% for FY19 based on the projected 4.5% growth in the Malaysian economy, and 5-10bps net interest margin compression in line with the industry.