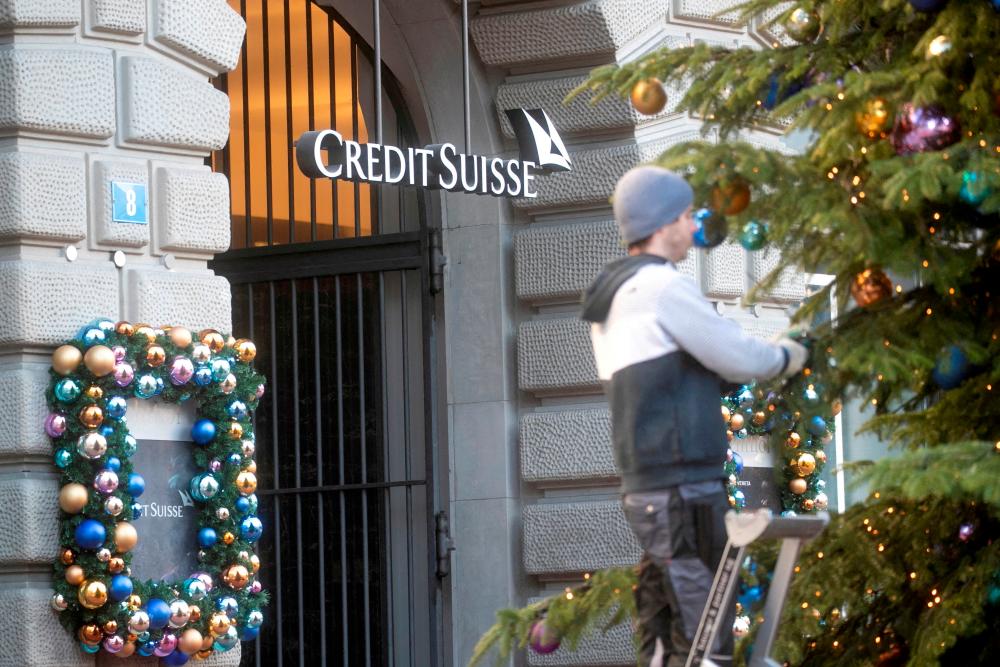 A Christmas tree is decorated in front of the headquarters of Credit Suisse in Zurich. – Reuterspic

Shareholders exercised 98.4% of their subscription rights, giving a boost to managers tasked with getting the Swiss bank back on track after the biggest crisis in its 166-year history.

“The successful completion of the capital increase is a key milestone for the new Credit Suisse,” its chief executive Ulrich Koerner said in a statement.

“It will allow us to further support our strategic priorities from a position of capital strength and create a simpler, more stable and more focused bank built around client needs, and generating value for shareholders,” he added.

“The rights issue is the necessary start to the process, said Jerome Legras of Axiom Alternative Investments. “But it is only the start of a long and painful journey.”

Another fund manager said the capital increase could encourage risk-focussed investors to buy the stock.

“Investors who are willing to take risks will be encouraged to take a chance on the bank,“ said Stephen Sola, founder of Sola Capital, adding that “management must deliver”.

The exercise of subscription rights left only 16.4 million shares unsold. These are due to be sold on the market at or above the offer price of 2.52 Swiss francs, Credit Suisse said.

The 4-billion-franc package is meant to fund a turnaround and strengthen Credit Suisse as it strives to move on from scandals and heavy losses that prompted speculation about its future and led to large withdrawals by customers.

Credit Suisse, has been battered by mishaps, including a US$5.5 billion (RM24.2 billion) loss on US investment firm Archegos. It also had to freeze US$10 billion worth of supply chain finance funds linked to insolvent British financier Greensill.

At the end of October, Credit Suisse said it planned to cut thousands of jobs and shift its focus away from investment banking and towards less turbulent wealth management.

Vincent Kaufmann, head of Ethos, which represents shareholders holding more than 3% of Credit Suisse stock said it should now focus on its wealth management and Swiss arm.

“Leadership must focus on restoring the confidence of all stakeholders, not only the shareholders but also and maybe more importantly the clients and the employees of the bank.”

Credit Suisse shares, which have plumbed record lows, were buoyed last week as its leadership sought to reassure markets.

After closing above 3 Swiss francs on Monday, they have retreated slightly, gaining 3.2% on Thursday to reach 2.942 francs, and crucially above the deal subscription price.

Despite the rights issue and share placement that made Saudi National Bank an anchor shareholder, key components of Credit Suisses turnaround plan remain short on detail.

Chairman Axel Lehmann this week flagged another loss in 2023 for the bank, while the stock price fall has brought its market value to below 12 billion Swiss francs, roughly the same as that of Swiss private bank Julius Baer.

The bank's planned revamp includes an increased focus on wealth management, while pruning back investment banking.

Credit Suisse has agreed to sell most of its Securitized Products Group and related financing businesses to US buyout fund Apollo Global Management to free up capital.

It also needs to spell out how it plans to spin off its investment bank into a new entity focused on advisory work such as mergers and acquisitions and arranging capital market deals.

The bank envisions selling a stake in CS First Boston, but could keep half. – Reuterspic