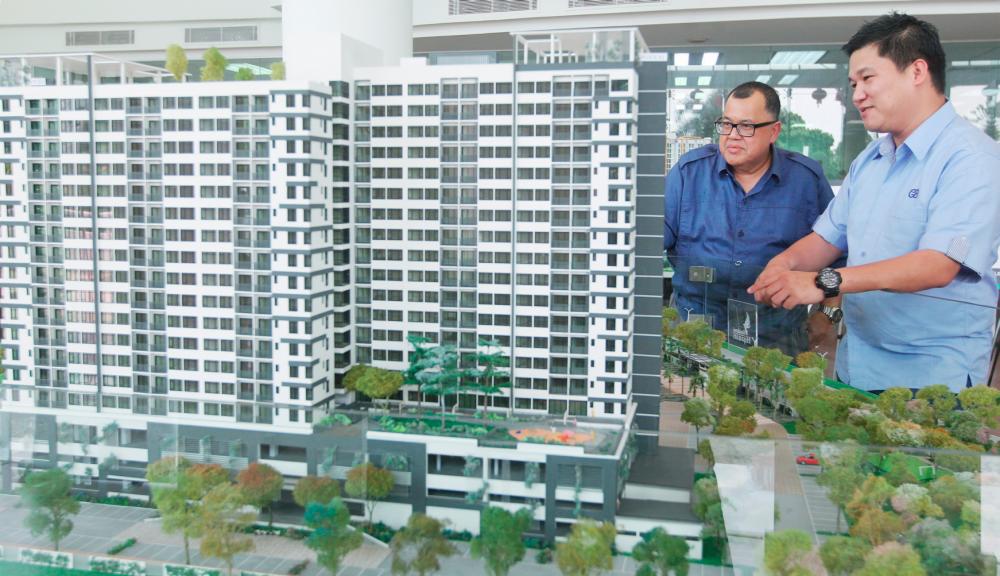 Yong (right) with a scale model of one of Crest Builder’s projects. - Zulkifli Ersal/THE SUN

KUALA LUMPUR: Crest Builder Holdings Bhd, which sees upside in the construction tender market, is targeting to secure another RM500 million worth of construction jobs in the second half of this year, in line with its aim to have total construction contract wins of RM600 million in 2019.

Managing director Yong Shang Ming said it has secured RM100 million of projects so far this year, bringing its construction order book to RM1.4 billion currently. He said the group’s tender book stood at RM2.2 billion to RM2.5 billion and it has a success rate of 15-20%.

Yong expects the revenue contribution from the construction segment and property development segment to come in at 75:25 this year on more construction jobs, from 50:50 last year.

Crest Builder is also eyeing the non-infrastructure building packages for the East Coast Rail Link like stations and depots. It has submitted for the pre-qualification exercise in May.

Against the backdrop of gloomy outlook in the construction sector in Malaysia, he said the group has been careful and selective, citing the profile of its tendered projects to be those of established developers. It also prefers to focus on projects unaffected by sales, such as hotels and office towers.

“If you look at the general market, we agree it’s a little sluggish but it is bottoming up already. Based on the tender trends, it’s on the upside and currently moving upwards. We see a lot more prominent developers calling tenders and prequalification (exercise) for their projects. We expect the tender market to be busier,” said Yong after Crest Builder’s AGM today.

The group remains unperturbed by the delays in its projects, including the Latitud8 project in Dang Wangi, the development of the Malaysian Rubber Board (MRB) land in Jalan Ampang and the Kelana Jaya LRT area, all which have been delayed for at least three years.

Yong said these projects are still pending the local authority’s approval, such as for zoning (Kelana Jaya LRT area), land size reduction and road alignments (MRB project) and will resubmit its plans for the MRB and Latitud8 projects. Construction of Latitud9 is ongoing, with its completion estimated in 2023, while the MRB and Kelana Jaya LRT development projects are estimated to complete in 2024.

“The delay of the projects may turn out to be positive. If you see the last two years, the property trend was on the downside. There’s no point launching something when it’s on the downtrend. We rather launch it when it’s bottom up or on the upside,” he explained.

On its dividend policy, Yong said it will be implementing a payout of minimum 20% of its profit after tax starting this year. Previously it has announced an unofficial 25% dividend payout.

In the property market, he said the group’s projects completed this quarter have seen good take-up rates.

3.Gyms back in operation, except for those in phase one states: MKN