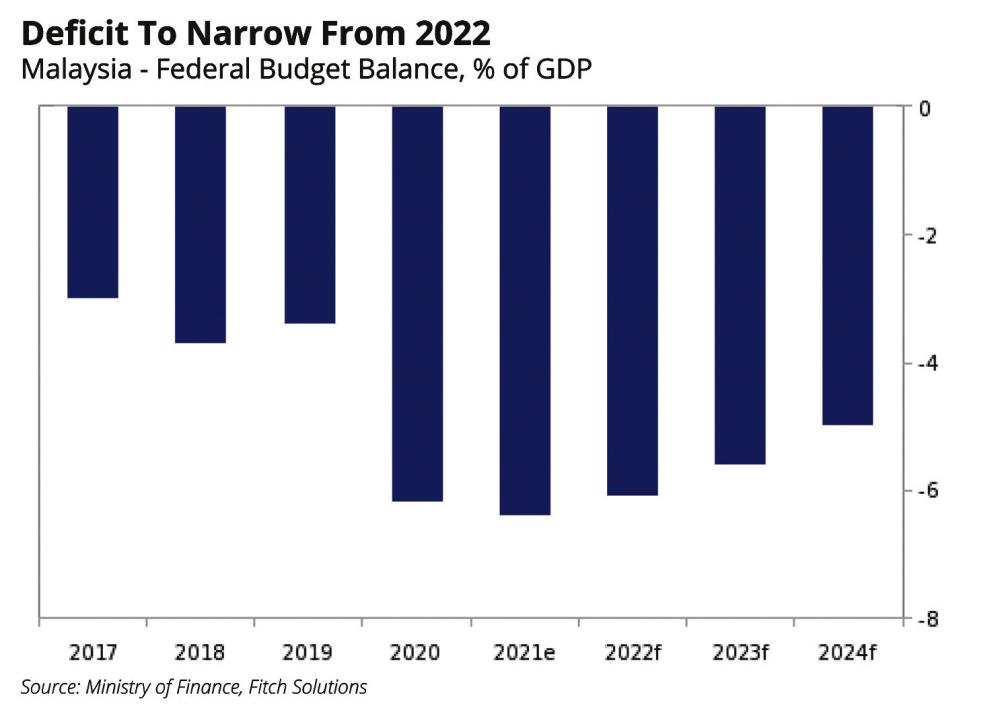 PETALING JAYA: Fitch Solutions has revised its forecast for Malaysia’s federal government budget deficit to come in lower at 6.1% of GDP in 2022 from 6.5% previously versus 6.4% in 2021.

“With the economy staging a strong recovery and energy prices staying elevated, we expect revenue collection to remain strong over the coming months. On the expenditure side, rising inflation and elevated fuel prices have caused the government to increase subsidies substantially, but this will be partially offset by lower Covid-19 spending.

“In 2023, we forecast the federal budget deficit to further narrow to 5.6% of GDP, but note that risks are weighted to the downside given that the government could ramp up spending ahead of upcoming elections, which must be held before Sept 23, 2023,“ said Fitch in a report.

Its fiscal balance forecasts, especially for 2023, are subject to downside risks given upcoming elections. The government has declared that it will bring forward its Budget 2023 announcement by three weeks to Oct 7, which could pave the way for early elections.

“Despite local election results suggesting that the main party of the current ruling coalition (Umno) is in a favourable position, we see risks that the government may ramp up social spending in Budget 2023 to further bolster support. The government may also allocate a higher budget for election campaigning, leading to a wider deficit than we currently forecast,“ warned Fitch.

It believes that revenue collection will reach RM252.5 billion (14.9% of GDP) in 2022, which is higher than the government’s projection of RM234 billion in Budget 2022. Already, monthly data show that revenue collections amounted to around RM148.4 billion during January-July, equivalent to 63.4% of the government’s expected outturn for 2022. This also represents a 21.3% y-o-y increase from the corresponding period in 2021.

“Over the coming months, we expect that a robust economic recovery and elevated energy prices will see government revenue growth remain strong. In August, we raised our 2022 real GDP forecast for Malaysia to 5.9% (in 2022) from 5.2% previously, after the economy grew by a stronger-than-expected 6.9% y-o-y in H1’22. Growth will be supported by a continued strong rebound in private consumption following the easing of Covid-19 curbs, which should bode well for sales and service tax collection.”

Meanwhile, Brent crude prices is expected to average US$105 a barrel in 2022, which is 63.8% higher than the government’s assumption of US$67 a barrel used to formulate Budget 2022. With petroleum-related revenue accounting for 18.4% of total revenue in 2021, elevated oil and gas prices will continue to contribute strongly to government coffers as well.

Moreover, the government has put in place several tax revenue measures which Fitch expects will continue boosting revenue inflows through the end of the year. One such measure is the Special Voluntary Disclosure Program for indirect taxes which encourages companies and individuals to disclose outstanding indirect taxes by offering incentives for paying liabilities from Jan 1 to Sept 30. The government expects to obtain an additional RM1 billion through this initiative in 2022.

“On the expenditure side, we expect higher government spending on subsidies, but this will likely be partially offset by lower Covid-19 spending. All in all, we expect expenditure to increase by 6.8% to reach RM355 billion (16.9% of GDP) in 2022, versus the government’s 2022 Budget of RM331.5 billion.”

According to Finance Minister Tengku Datuk Seri Zafrul Abdul Aziz, Malaysia is expected to spend RM77.3 billion on subsidies and cash aid in 2022, which is significantly above the government’s original subsidy projection of about RM31 billion for the year.

“That said, we expect the increase in expenditure caused by subsidies to be partially offset by lower Covid-19 spending. The government has allocated RM23 billion for its Covid-19 fund but it has only utilised RM6.2 billion as of April. With restrictions being eased and the pandemic situation remaining stable since early May, we expect the government to underspend its allocation for the Covid-19 fund.

“We expect the central government debt as a share of GDP to increase slightly to 63.7% of GDP in 2022 from 63.5% in 2021. Malaysia’s government debt burden is not exceptionally high relative to peers at a similar level of economic development, and the government is unlikely to exceed its statutory debt-to-GDP ceiling of 65%, which has been raised from 60% in October 2021. However, we note that the debt ceiling has already been raised twice since 2019. In addition, debt service charges accounted for 16.4% of its total expenditure in 2021 and is likely to continue to rise further in a rising interest rate environment, posing downside risk to debt sustainability,“ said Fitch.