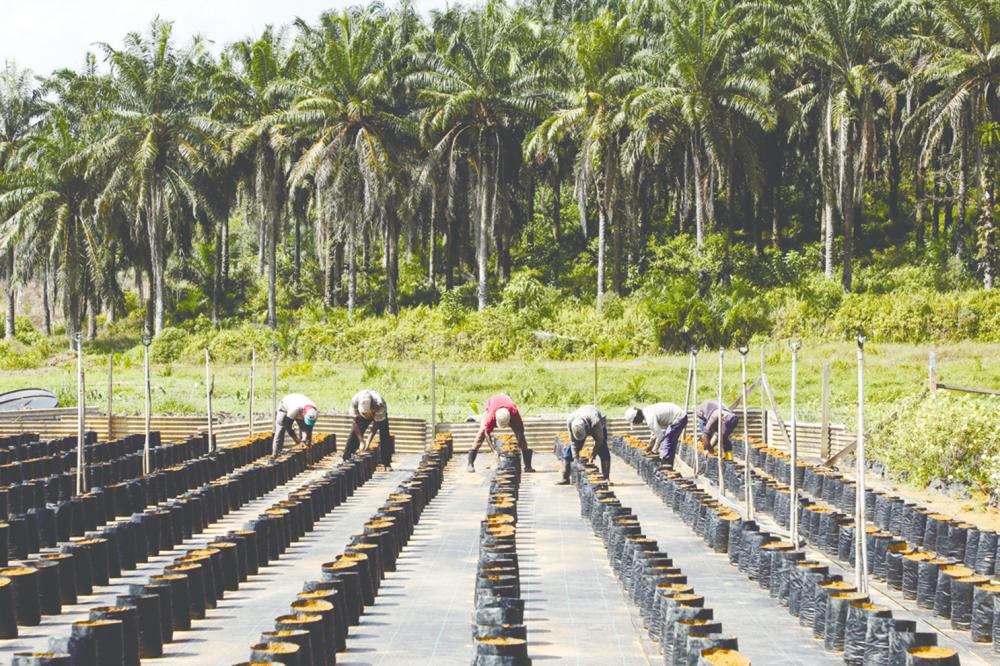 Workers planting oil palm seeds at an oil palm plantation in Slim River. Inter-Pacific Securities head of research Victor Wan says that when worker shortage issues have been addressed, it will translate into higher production and alleviate the supply-demand mismatch. – REUTERSPIX

PETALING JAYA: Palm oil players should focus on increasing yields and not hectarage as a way out of the unusual crude palm oil (CPO) supply crunch which has seen CPO futures contract hitting an all time high of RM8,163 per metric ton (pmt), according to Inter-Pacific Securities head of research Victor Wan.

The previous month saw the start of a series of historic highs for the commodity as it charted new heights across the RM6,000 pmt threshold, culminating with a record of RM6,808 pmt on March 2.

Looking at the current elevated price environment, Wan concurred with the popular view that paints the widespread shortage of edible oils, supply chain woes from the pandemic impact and the ongoing Ukraine-Russia war as the culprits. These are exacerbated by the labour woes in Malaysia.

“Moving ahead, palm oil players would have to resort to improving yields rather than acreage to resolve this issue given the current focus on environmental, social, and governance, particularly on the sustainability aspect,” Wan told SunBiz.

He opined that even if the planters intended to expand, there is dearth of land for them to do so.

“On the whole, the days of CPO being RM2,000 pmt have long gone and the levels of RM6,000 will likely to settle lower as soon as some of the issues are addressed,” said the head of research.

For Malaysian producers, he stated that when the issues related to foreign workers have been addressed, this will translate into higher production and alleviate the supply-demand mismatch driving the CPO prices.

Despite the elevated prices, Wan said producers will have to contend with higher operating costs, particularly due to fertiliser inputs which have seen prices soaring as it is derived from petrochemical sources aligned to the price of oil, which has been increasing.

The runaway price environment for commodities has led to countries, notably Malaysia and Indonesia, holding off or staggering their biodiesel mandates, shifting their goals to adapt to the market situation.

“I believe the biodiesel blessing mandate is here to stay and it will not be reversible. The only way forward on this front would be a bigger proliferation of electric vehicles.”

In this situation, Plantation Industries and Commodities Minister Datuk Zuraida Kamaruddin sees the runaway CPO prices to be an opportunity to increase Malaysia’s market share in the global market.

She has met with numerous agri-commodity players from various country as part of the ministry’s preparations to address the uncertainties brought on by the current geopolitical situation.

“The increased revenue from the spikes in demand for palm oil will greatly help the country, which is still recovering from the effects of the Covid-19 pandemic,” Zuraida said in a statement.

Simultaneously, the minister assured consumers that there is an adequate supply of subsidised cooking oil to meet local demands.