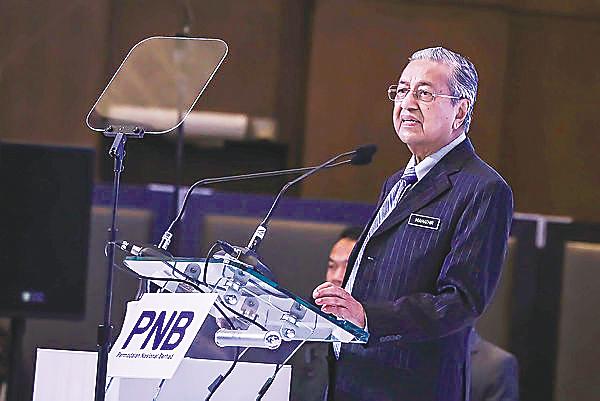 KUALA LUMPUR: The private sector must take the lead in being the key driver of the economy, Prime Minister Tun Dr Mahathir Mohamad said today.

Speaking during his opening address at the inaugural PNB Corporate Summit 2019, Mahathir said there is currently an imbalance between the private and public sector participation in the Malaysian corporate sector, which, if left unchecked, could prove detrimental.

“While we cannot exactly pin down the extent of malfunction affecting the private sector, we know something went terribly wrong with the country for the past few years due to kleptocracy and misappropriation of public funds.”

“From the public sector perspective, the new government had been working overtime to re-energise and clean up the mess left behind. We have instituted crucial reforms to enhance stability, strengthening fiscal management and enhancing corporate governance and transparency,” he said.

For this reason, he said the expansion of the private sector was vital to spur growth by creating more opportunities for employment, enabling entrepreneurs to scale up their businesses and to bring in foreign direct investment to accelerate domestic growth.

Using the example of Malaysia’s manufacturing sector, Mahathir pointed out that despite the level of involvement of GLICs and GLCs in almost every sector of the economy, the manufacturing sector has benefited greatly from high levels of private sector investment.

“Multinational corporations from more than 40 countries have invested in over 5,000 companies in Malaysia’s manufacturing and related services sectors, encouraged by the country’s pro-business environment.

“This has also been reinforced by investments by the domestic manufacturers. This is a clear indicator of the positive impact of allowing the private sector to take the lead,“ he said.

Mahathir also said that while GLICs and GLCs were important pillars of development, they needed to reevaluate their level of participation in Malaysian corporates. Nevertheless, GLICs and GLCs still have a part to play in Malaysia’s growth story.

“Each GLIC has a distinctive purpose. Unfortunately, despite the clear mandates given, these GLICs were previously subverted to serve the interests of self-serving and greedy leaders. The government has no business being in business.

“The GLCs must coexist in a space where they compete on a level playing field. GLCs should not crowd out and directly compete with the private sector, especially in non-strategic businesses,“ he added.

Closing out his speech, Mahathir called on corporates to look to the Shared Prosperity Vision 2030 (SPV2030) as an ideal to be upheld in all aspects.

“Malaysian corporates must play a bigger role in wealth and value creation. A part of this process is key to enhance productivity and talent development. For the former, there has to be greater leverage on technology and for the latter, the private sector and the GLCs need to support the existing education system.

“Also, an important imperative is to empower entrepreneurs who will contribute to a dynamic private sector. We need to also strengthen our existing institutions to generate the kind of talent that both the private and public sector need,” he said.

“Nevertheless, we continue to face challenges that need to be managed and addressed by both the public and private sector,” she said.

Zeti outlined three vital imperatives for the public sector in order to address these challenges, which are: to enhance the efficiency and productivity of the bureaucracy, having a strengthened education system that will support future growth and transformation, and strengthening the financial position of the public sector.

“For the private sector, Malaysian corporates also have a key role in driving and achieving a sustainable growth agenda. This particularly involves having stronger corporations that are operating in keeping with the global trends,” she said.