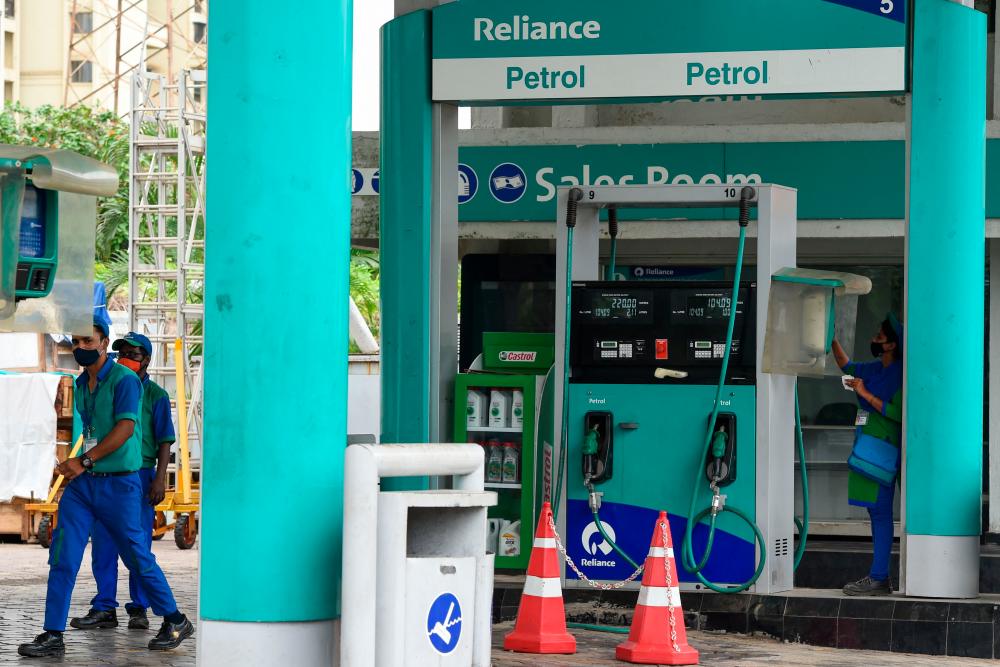 Employees at the Reliance Industries petrol pump in Navi Mumbai on Thursday. The conglomerate's multi-billion-dollar fortune is powered by oil and petrochemicals businesses, but Reliance has aggressively diversified into areas including telecoms and retail in recent years. – AFPPIX

MUMBAI: Indian oil-to-telecom giant Reliance Industries unveiled plans on Thursday to invest US$10 billion (RM41.16 billion) in renewable energy over the next three years as Asia's third-largest economy struggles to reduce its dependence on fossil fuels.

In a virtual address to shareholders, Reliance chairman and Asia’s richest man Mukesh Ambani said the new business aims to “bridge the green energy divide in India and globally”.

The conglomerate's multi-billion-dollar fortune is powered by oil and petrochemicals businesses, but Reliance has aggressively diversified into areas including telecoms and retail in recent years.

As part of its push towards renewable energy, Ambani said the company had begun work on a 5,000-acre manufacturing facility in India's western state of Gujarat.

The project will produce solar energy and green hydrogen that “will put Gujarat and India on the world’s solar and hydrogen map”, Ambani said.

“I envision a future when our country will be transformed from a large importer of fossil energy to a large exporter of clean solar energy solutions,“ the billionaire added.

Reliance aims to produce 100 gigawatts of solar power by 2030, nearly a quarter of the 450-gigawatt target set by Indian Prime Minister Narendra Modi.

But in a sign of its continued focus on its core fossil fuel businesses, India's most valuable company also told shareholders that Saudi Aramco chairman Yasir Al-Rumayyan would join its board.

The appointment will strengthen Reliance’s “strategic partnership” with Saudi Aramco, Ambani said, with the two firms working to finalise a US$15 billion deal that will see the energy giant buy a 20% stake in the Indian company.

India is the world's third-largest emitter of carbon dioxide with rising air pollution levels resulting in an estimated 1.7 million deaths in 2019, according to a study by medical journal The Lancet.

Reliance, which operates the world's biggest refining complex in Gujarat, has a market capitalisation of more than US$187 billion.