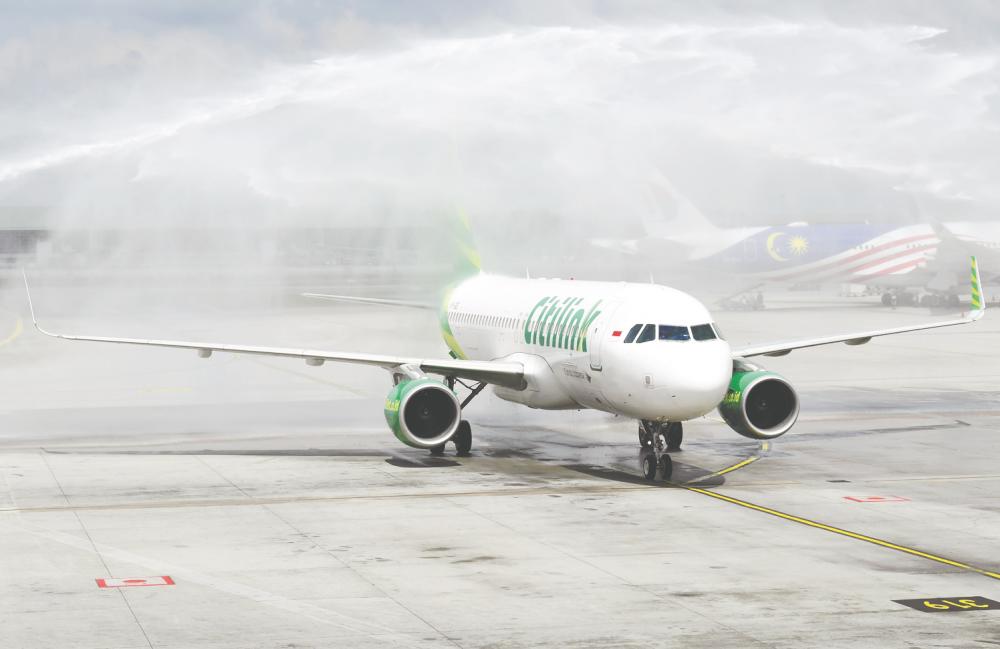 Citilink Indonesia’s aircraft being given a water salute upon landing at KLIA. BERNAMAPIX

“We are going to be very focused next year and will continue to pursue many more airlines,“ he told reporters after welcoming Citilink Indonesia’s inaugural flight into KLIA today.

Mohd Sallauddin said the potential airlines might come from China, Middle Eastern countries, the Asian region and other regions as well.

He said Malaysia would be able to attract many foreign airlines due to its variety of tourism attractions and accessibility as some LCCs found it easy for a startup.

As for 2018, he said MAHB attracted 13 airlines, of which 11 have already started operations and the other two by year-end.

Meanwhile, Citilink Indonesia’s aircraft was given a water salute upon landing at KLIA at 12.10pm following an inaugural flight from Banyuwangi, the eastern-most regency of East Java, an area rich in ecotourism and nature-based tourism.

MAHB is also scheduled to welcome the first flight from TUI Airways from Birmingham at Langkawi International Airport today. Besides Birmingham, TUI offers long-haul chartered services from two other UK airports – Manchester and Gatwick – to Langkawi with three fortnightly flights on the 797 Dreamliner.

Meanwhile, the Royal Brunei Airlines will start its Bandar Seri Begawan-Kuching route on Dec 28 with two flights a week.

Mohd Sallauddin said in total, MAHB added 50 international routes to its list this year, while international frequencies per week from both local and foreign carriers increased by 458 as of October 2018.

Afghan NGO women ‘threatened with shooting for not wearing burqa’

1.Afghan NGO women ‘threatened with shooting for not wearing burqa’

2.UMNO-PAS cooperation to be discussed after Johor DUN dissolved

3.Raducanu crashes out of Melbourne in pain