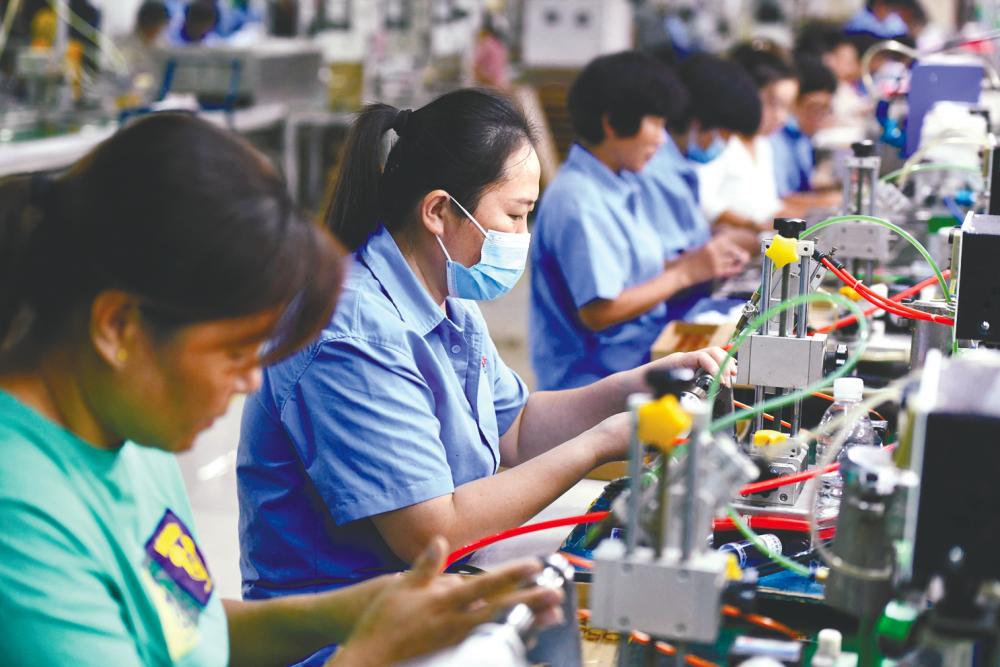 Workers on an assembly line at a factory in Fuyang city, China. There is ongoing friction between the US and China that affects a key sector in Malaysia-China trade – electronics. – AFPpix

PETALING JAYA: Malaysia will have to depend more on domestic demand and prepare for an anticipated economic slowdown in China that will have an impact on Malaysia’s gross domestic product (GDP) growth.

Socio-Economic Research Centre executive director Lee Heng Guie noted that China is Malaysia’s largest trading partner – accounting for 18.9% of the latter’s total trade in 2021. Thus, Malaysia will have to depend more on internal domestic demand going into next year, he told SunBiz.

“Hopefully, in the coming budget (Budget 2023), there are short-term measures to sustain private consumption, for private investment to continue to be strong, and support for the manufacturing, services, and construction sectors.

“The Malaysia-China direct trade number is still good partly because of E&E and palm oil. But too long of a slowdown in China will hit our trade side,” said Lee.

Despite better performance in the third quarter of 2022 compared with the first two quarters, Lee said, there are still underlying weaknesses affecting China’s economy.

“We are waiting for the (Chinese party) congress in October. We’ll see if there will be a shift in its Covid approach to help with their internal economy. And most importantly for its people to come in to Malaysia as tourists,” he added.

Similarly, economist Nungsari Ahmad Radhi said it is certain that China’s economy will affect Malaysia’s trade as well as growth as it is the country’s largest trading partner.

In addition, there is the ongoing US-China trade war and sanctions that affect a key sector in Malaysia-China trade – electronics.

According to the latest World Bank forecast, China’s economy will decelerate sharply with growth of only 2.8% in 2022 compared with 8.1% in 2021.

At the World Bank East Asia and Pacific October 2022 economic update briefing held on Sept 27, its lead economist for Malaysia, Apurva Sanghi, said Malaysia is reliant on China compared to its neighbours.

“So anything that happens in China affects the Malaysian economy much more and there is also sector-specific impacts. For example, tourism in Malaysia has been affected by the absence of Chinese tourists, at least in the short term,” Apurva said.

World Bank regional vice president Manuela Ferro has cautioned economies to prepare for a slowing global growth by addressing domestic policy distortions that impede longer-term development. It is said that global economic slowdown is beginning to dampen demand for the region’s exports of commodities and manufactured goods.

Simultaneously, rising inflation has provoked interest rate increases, which in turn have caused capital outflows and currency depreciations in some East Asia and Pacific countries, increasing the burden of servicing debt and shrunk fiscal space, hurting countries that entered the pandemic with high debt.