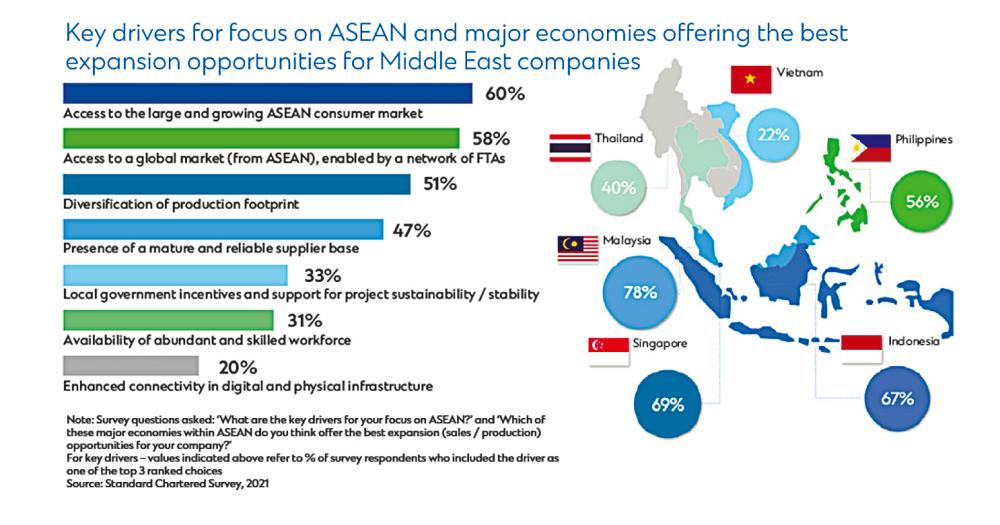 PETALING JAYA: Middle East companies focusing on Asean are positive about business growth in the region – and a significant 78% view Malaysia as their top Asean market for expansion.

This is according to a survey commissioned by Standard Chartered for its Borderless Business: Middle East-Asean Corridor, a report that explores high-potential opportunities for cross-border growth in this corridor.

A similar sentiment is shared in another survey conducted by Standard Chartered in the Borderless Business: India-Asean Corridor survey for Indian companies with an Asean focus. Malaysia is tied in third place with neighbour Singapore as the top three most preferred destination among Indian companies looking at expansion in Asean.

Standard Chartered Malaysia managing director and CEO Abrar A. Anwar said Asean is a fast-growing trade bloc with increasing economic and financial influence, and it continues to see a growing number of opportunities for businesses in the region.

“We are well-positioned to support companies from the Middle East and India to venture into Malaysia and help our clients leverage these potential growth opportunities that Asean and Malaysia have to offer, especially in growth sectors important to their economies. We are committed to delivering sustainable trade finance solutions to our clients as we foresee these trade corridors growing rapidly on the back of a strong government impetus and a perceptible shift in consumer demand in favour of clean technology.”

The report cites increased collaboration through multiple regional and country-level alliances between the Middle East and Asean having enabled greater participation of Middle East companies in Southeast Asia.

In particular, the Asean-GCC Joint Vision has served as the foundation for pursuing closer economic and cultural cooperation between the regions, while bilateral partnerships between individual countries such as the Malaysian Investment Development Authority’s memorandum of understanding with the Investment Promotion Agency of Qatar in 2019, serve a notable example of how growth opportunities are being explored to expand business and innovation partnerships in this corridor.

Key growth sectors for Malaysia in the report’s growth watchlist that are attractive to Middle East companies are refining and petrochemicals, renewable energy, and retail and consumer goods. In this regard, Malaysia has established integrated petrochemical zones that offer centralised utilities, storage services and a comprehensive transportation network, to help reduce capital and operations costs for companies. The country has also emerged as a major hub for solar photovoltaic (PV) production and is a key market for halal goods as it works towards building a stronger halal ecosystem between Asean and the Middle East.

Senior executives of the surveyed Middle East companies regard factors such as access to the large and growing Asean consumer market (60%), access to a global market enabled by a network of Free Trade Agreements (58%) and diversification of production footprint (51%) as the most important drivers for expansion into the region. All surveyed Middle East companies expect business growth over the next 12 months, with over 80% of them projecting an annual increase in both revenue (82%) and production (81%) of over 10%.

Meanwhile, government-led programmes continue to play a key role in facilitating business activity in the India-Asean corridor as India views Asean as an important growth partner under its “Act East Policy”. Economic ties between Asean and India have been facilitated through various multilateral and bilateral initiatives such as the Malaysia-India Comprehensive Economic Cooperation Agreement that continue to drive corridor trade and improve market access for Indian companies.

Key growth sectors in the report’s growth watchlist that are drawing Indian companies to Malaysia are digitalisation, renewable energy and electric vehicles. India-based technology companies have made inroads into Malaysia as part of the national MyDigital initiative and the country’s response to the pandemic that included measures to boost digital payments and e-commerce. Malaysia has also emerged as a major destination for the manufacturing of PV systems. Such expansion plans are creating new opportunities for Indian businesses seeking to invest or provide solutions to help attain Asean’s sustainability objectives. As Asean governments start offering incentives and building support infrastructure to facilitate growth such as Malaysia’s tax incentives to EV buyers under its National Automotive Policy, new economy Indian companies have expressed plans to expand their footprint in Southeast Asia in the coming years.

Broadly, Indian companies look to access to the large and growing Asean consumer market (90%), availability of abundant and skilled workforce (51%) and access to a global market enabled by a network of Free Trade Agreements (44%) as the most important drivers for expansion into the region. All surveyed Indian companies expect their business to increase production in Asean while more than 90% of them project growth in revenue (93%) over the next 12 months.

The Regional Comprehensive Economic Partnership (RCEP) is also expected to attract more investments into the 10-nation bloc from both corridors. All Middle East respondents agreed that the ratification of the RCEP agreement will lead to more investments from their company, while some 63% of Indian respondents indicate that their company will increase investments into Asean over the next three to five years, on the back of the ratification of the RCEP agreement.