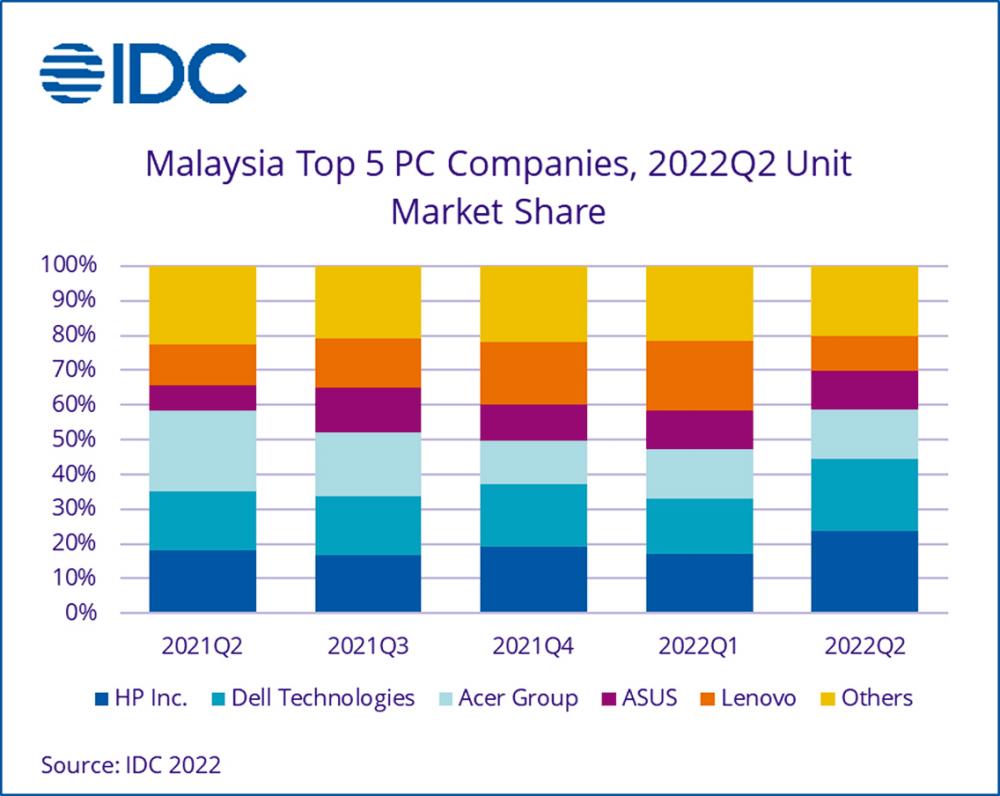 KUALA LUMPUR: Malaysia’s traditional PC market including desktops, notebooks, and workstations, declined by 9.6% year-over-year (y-o-y) in the second quarter of 2022 (Q2’22), with a total of 455,000 units shipped to the country, according to the International Data Corp’s (IDC) Worldwide Quarterly Personal Computing Device Tracker.

Since the reopening of the economy and the easing of movement restrictions, the demand for devices weakened in both the consumer and commercial segments. Notebook shipments declined by 15.5% y-o-y while desktops posted 7.6% y-o-y growth.

Spending in the consumer market shifts away from devices when lockdowns are lifted, providing opportunities for people to travel, celebrate festive occasions, and engage in other recreational activities. Demand for notebooks and even desktops has decreased compared to the previous year, as the market returns to normal and most purchases for such devices had already been fulfilled in preceding quarters.

“Despite the improving supply situation in the market, PC vendors are more concerned about the increasing difficulty of selling devices as demand continues to weaken. Inventory across channels has begun to build up, resulting in vendors taking less stock this quarter,” said IDC Malaysia market analyst Justin Peterson Lo.

Since restrictions were lifted back in Q3’21, notebook sales began to decline, especially in the commercial market as the workforce was allowed to work on-site. The demand for desktops has increased over time and was initially driven by purchases from the public sector.

The small and medium-sized business (SMB) and enterprise segments are also experiencing increased demand for desktops as more companies resume work from office. But the overall commercial market still posted a 13.3% y-o-y decline due to the large education fulfilment that happened last year. Even the recent education deployment by the Education Ministry (MOE) that came through in the quarter was unable to offset the decline.

> Dell Technologies came in second place with 20.7% market share and 12.3% y-o-y growth. Dell leads the commercial market, performing well across most segments, particularly the education sector thanks to the large fulfilment of the MOE 12 zones project this quarter. However, Dell’s consumer shipments declined.

> Acer Group took third place with a 14.2% share in the market but a 44.6% y-o-y decline in shipments compared to last year’s Cerdik Initiative project for 37,000 Chromebooks in the education sector. Acer’s consumer shipments continued to grow sequentially but posted a y-o-y decline due to strong demand during the pandemic.

> Asus occupies the fourth place in the market with 11.2% share and 36.8% y-o-y growth. Asus grew a significant 50.1% in the consumer segment thanks to strong inventory replenishment and clearance of aging stock, but it lost momentum in the commercial segment due to the slowdown in demand.

> Lenovo is fifth with a 9.9% market share and a 24.2% declined in shipment. Lenovo performed well in the commercial desktop category, posting 55.3% y-o-y growth as it fulfilled many public sector transactions this quarter. However, consumer shipments dropped significantly due to pent-up stocks across channels and weak market demand.

“After weak sales during the first half of the year, PC shipments in Malaysia are expected to exceed H1’22 but will still be lower than H2’21 due to the big inventory replenishment that happened in 2021. The consumer market will likely see an increase in demand during H2’22 as vendors seek to run more promotional activities and physical IT events to boost sales.

“On the commercial side, demand in the private sector has slowed since last year as most companies have bought devices in bulk, especially notebooks due to work from home arrangements. Q3’22 will remain quiet, but the upcoming education deals in Q4’22 will help bolster shipments in the commercial market,” added Lo.