Dragged by stronger reductions in production and new businesses 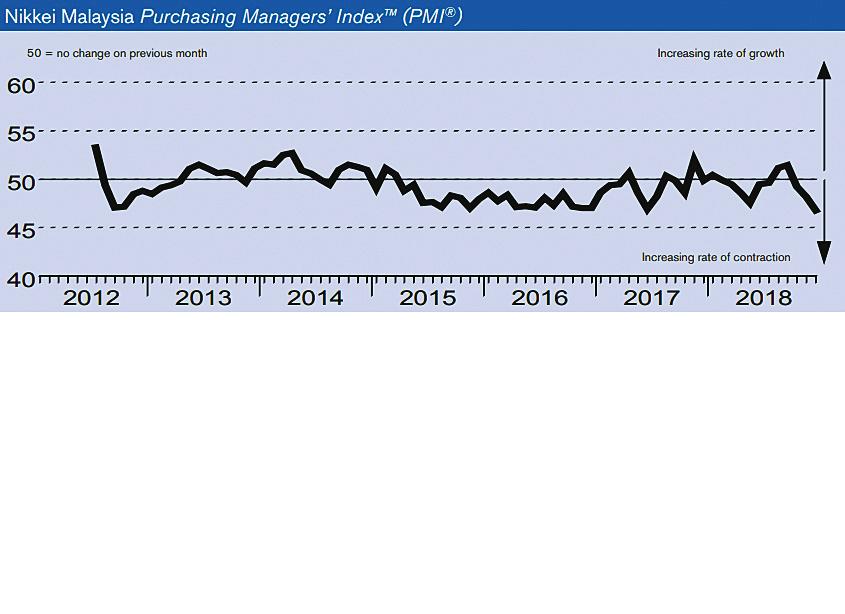 PETALING JAYA: The headline Nikkei Malaysia Manufacturing Purchasing Managers’ Index (PMI), which is a composite single-figure indicator of manufacturing performance, fell to 46.8 in December from 48.2 in November to reach the lowest level since the survey started in July 2012.

IHS Markit, which compiles the survey, said that stronger reductions in production and new businesses dragged the headline index deeper into negative territory in December.

The latest reading was also consistent with a marked deterioration in manufacturing sector health, fuelled by a stagnation in employment. The sector contracted in each month of the fourth quarter.

IHS Markit noted that Malaysian manufacturers received unfavourable intakes of new work from overseas in December, adding that orders from clients in European and the Asia-Pacific region were reportedly down on the month. However, it said that the fall in foreign demand was only mild.

It also added that concerns about demand conditions led to firms clearing their post-production inventories and the stocks were depleted to the greatest extent since November 2016.

According to the survey data, backlogs of work were reduced, with the rate of depletion accelerating to a near 1½-year peak.

On the price front, it said that operating expenses continued their ascent, rising solidly amid reports of unfavourable exchange rate movements and greater raw material costs.

“That said, the rate of inflation eased to a four-month low. Selling prices were subsequently increased in December, but competition and requests for discounts restricted the rise to a mild pace.

“Meanwhile, the trend in business confidence diverged from survey data on current conditions, with optimism strengthening to a four-month peak,” it added.

Commenting on the Malaysian Manufacturing PMI survey data, IHS Markit economist Joe Hayes said the December data revealed the strongest contraction in the Malaysian manufacturing sector that has ever been recorded in the survey’s six-and-a-half-year history.

Hayes said the negative readings of the PMI have been recorded across each month of Q4, signalling that the goods-producing sector is likely to heavily weigh on the final gross domestic product (GDP) print of 2018.

“Sub-indices provide some deeply concerning trends. Most notably, demand fell markedly, while export orders dropped for the first time since June amid reports of economic weakness across the Asia-Pacific region.

“With production falling, firms cut back stocks of inputs and finished goods, suggesting that prospects for the start of 2019 are likely to remain negative,” he added.