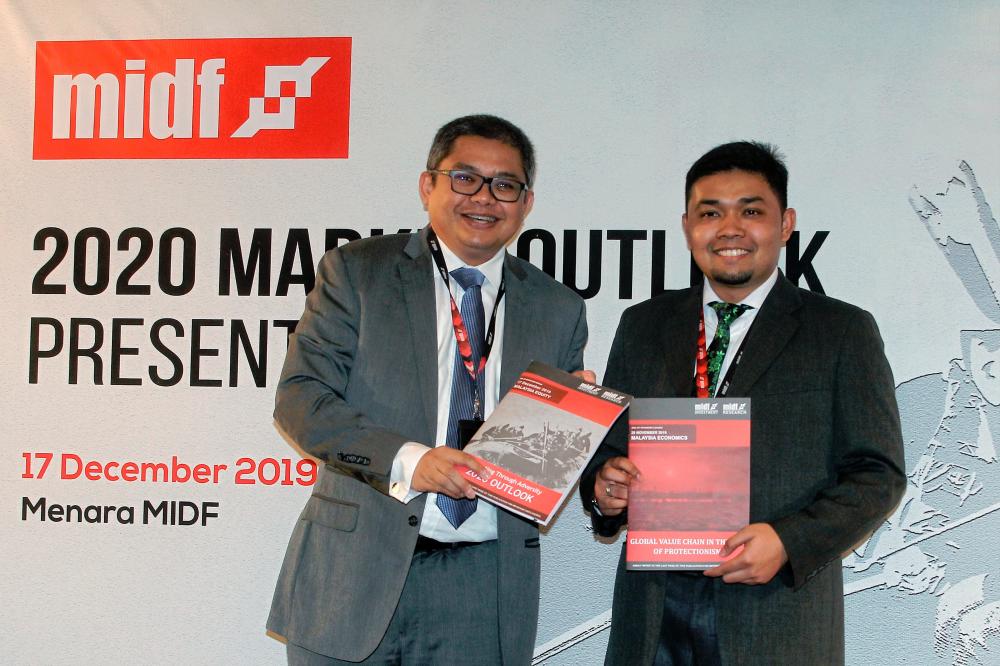 KUALA LUMPUR: Malaysia is not heading to a recession, thanks to the support coming from domestic exports made up of commodities, according to MIDF Research’s head of research Mohd Redza Abdul Rahman.

“With the increase in commodity prices and export numbers, this will translate into a positive impact to the country’s economic growth,” he told the media at the research house’s 2020 outlook briefing.

Mohd Redza highlighted that the increase in commodity exports will mitigate the concerns for the country’s electric & electronic (E&E) which has been affected the most by the US-China trade war.

For the end of 2020, he forecasted Bursa Malaysia’s FBM KLCI to return to 1,680 points, underpinned by the recovery in mining output and strong growth of domestic-oriented industries.

However, the head of research noted that the year-end target is at an implied lower end of its historical range price-earnings ratio of 16.5 times to factor in the risk to earnings from concerns over external trade performances.

“In 2020, global commodity prices are expected to stay at profitable levels and we forecast Brent crude oil price to average at US$65 per barrel and crude palm oil at RM2,450 per metric ton,” he said.

He elaborated that most of the earnings in the composite index will be coming from the banking, plantations, oil & gas and industrial product (Petronas Chemical) sectors as well as a recovery in the telecommunications sector.

In regards to Malaysia’s trade, MIDF’s economist Muhammad Zafri Zulkeffeli predicted that the country’s exports and imports will grow at lower pace from the contraction experienced this year.

“Next year will register an estimated growth of 0.9% to 1.4% due to the low base effects this year,” he said.

He elaborated that the expected growth is mainly due to the commodities based exports, crude palm oil, crude petroleum and LNG.

The research house expects a slight rebound in Malaysia’s trade balance next year with exports improving to 1.5% from an expected contraction of 1.1% this year and imports rising to 0.8% from an expected decline of 4.6% in 2019.

With regard to the trend of rate cuts by central banks around the world, he predicted that Bank Negara Malaysia will cut 25 basis points (bps) cut in the overnight policy rate in the first quarter of next year.

The economist stated that the rate cut is expected to take place on the back of GDP growth moderation. He said the previous OPR cut in May 2019 did not spur the economy much.

“The third quarter GDP was quite weak, the industrial production index (IPI) is declining and most importantly, the import of capital and intermediate goods are shrinking,“ he pointed out.

Apart from that, MIDF expected Malaysia’s inflationary pressure to increase with the consumer price index (CPI) rising to 2.4 in 2020 from a CPI of 0.6 forecast in 2019, due to the floating fuel price mechanism slated to be introduced next year.