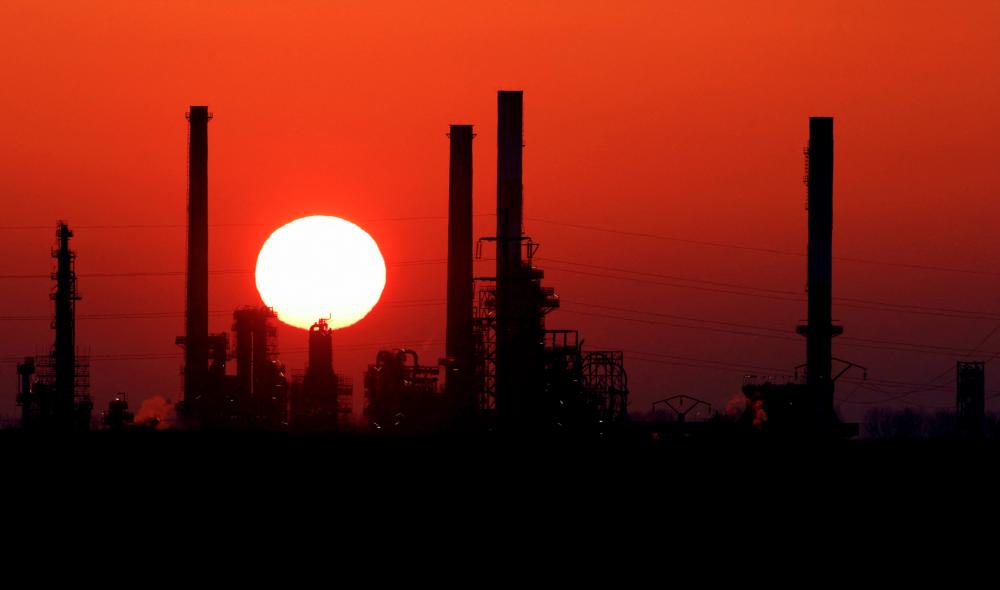 The sun sets behind the chimneys of an oil refinery in the southeast of Paris, France. – Reuterspix

US emergency oil stocks fell 8.4 million barrels to 434.1 million barrels in the week ended Sept 9, its lowest level since October 1984, according to data released on Monday by the US Department of Energy.

US. President Joe Biden in March set a plan to release 1 million barrels per day over six months from the Strategic Petroleum Reserve (SPR) to tackle high US fuel prices, which have contributed to soaring inflation.

Global oil supply is expected to tighten further when a European Union embargo on Russian oil takes effect on Dec 5.

The G7 will implement a price cap on Russian oil to limit the country’s oil export revenue, seeking to punish Moscow over the invasion of Ukraine, while taking measures to ensure that oil could still flow to emerging nations.

The US Treasury, however, warned that the cap could send oil and US petrol prices even higher this winter.

The EU’s executive European Commission is due on Wednesday (Sept 14) to unveil a package of measures to help power firms facing a liquidity crunch.

France, Britain and Germany on Saturday said they had “serious doubts” about Iran’s intentions to revive a nuclear deal. Failure to revive the 2015 deal would keep Iranian oil off the market and keep global supply tight.

In more bearish news for markets, China’s oil demand could contract for the first time in two decades this year as Beijing’s zero-Covid policy keeps people at home during holidays and reduces fuel consumption.

US domestic oil output is also set to rise in coming months. Oil output in the Permian Basin in Texas and New Mexico, the biggest US shale oil basin, is due to rise 66,000 barrels per day (bpd) to a record 5.413 million bpd in October, the US Energy Information Administration said in its productivity report on Monday.

The European Central Bank and the US Federal Reserve, meanwhile, are prepared to increase interest rates further to tackle inflation, which could strengthen the US currency and make dollar-denominated oil more expensive for investors.

“A strong dollar would serve as a reverse correlation to commodities priced in dollars, and would likely serve as a drag on upside gains in the energy market,“ said Bob Yawger, director of energy futures at Mizuho. – Reuters