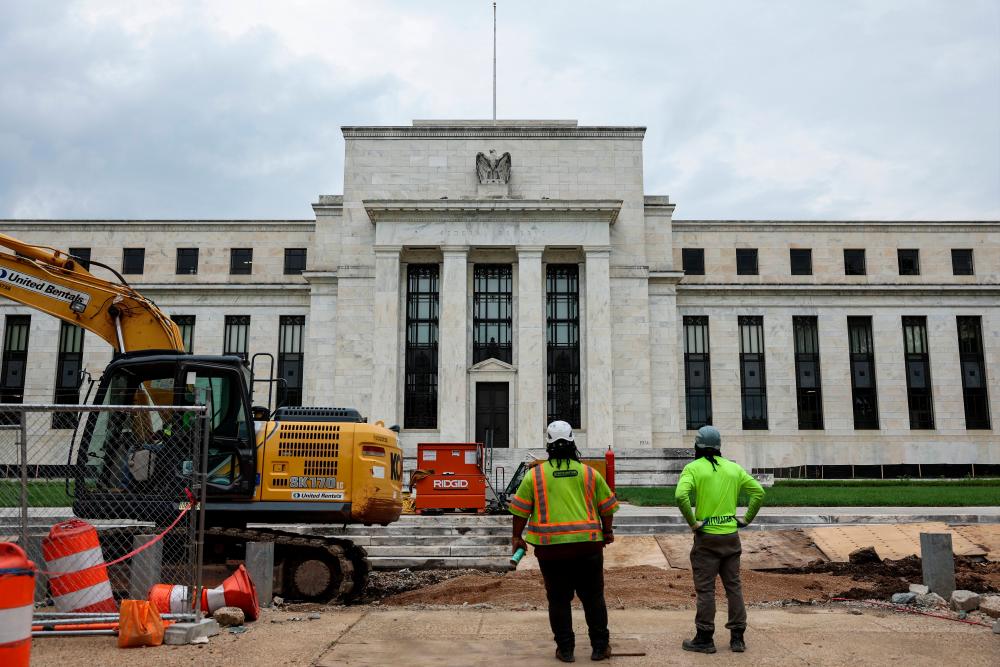 Construction workers looking on outside the Federal Reserve building in Washington on Tuesday, July 26. The US central bank has been raising interest rates aggressively – with the latest big increase on Wednesday – to try to cool the economy and tamp down price pressures. – AFPpix

WASHINGTON: The US economy contracted for a second straight quarter between April and June, government data showed today (July 28), adding fuel to recession fears in a headache for President Joe Biden ahead of midterm elections.

Gross domestic product (GDP) declined at an annual rate of 0.9% in the second quarter, following a bigger drop in the first three months of the year, according to the Commerce Department.

While not the official definition, two quarters of negative growth is commonly viewed as a strong signal that a recession is under way, and a downturn in the world’s largest economy would have global consequences, as well as domestic political costs.

Biden insisted that the US economy is “on the right path”, despite the slowdown, but his critics are sure to seize on the report as proof of the veteran Democrat’s mismanagement.

After a 1.6% decline in the first three months of the year, the report said the slowdown in the latest quarter was largely due to drops in government spending at all levels and in private investment on goods, including autos, and on residential buildings, despite an increase in exports.

But personal consumption expenditures (PCE) continued to increase, though at a slower rate than the prior quarter, the data showed.

The US economy also continues to battle sky-high inflation, as a result of supply chain snarls due to Covid lockdowns, as well as the fallout from Russia's war in Ukraine which has sent food and fuel prices soaring.

Consumer prices topped 9% in June, the highest in more than four decades, while the GDP data showed another key inflation measure, the PCE price index, rose a still-high 7.1% in the latest three months, the same as in the January-March period.

The US central bank has been raising interest rates aggressively – with the latest big increase on Wednesday – to try to cool the economy and tamp down price pressures.

“It’s no surprise that the economy is slowing down as the Federal Reserve acts to bring down inflation,” Biden said in a statement shortly after the GDP report was released.

“But even as we face historic global challenges, we are on the right path and we will come through this transition stronger and more secure,” he said, noting the US “job market remains historically strong” and the economy created more than a million jobs in the past three months.

It would be highly unusual for an economy still adding jobs at a rapid pace and with near record-low unemployment, to fall into recession, but even so many economists say the discussion of a downturn is more a matter of when, not if.

That poses a major political headache for the president, who has seen his approval ratings plummet in recent months as American families struggle to make ends meet due to surging inflation.

Fed chair Jerome Powell agreed with Biden and other economists who say the GDP figures are inconsistent with other strong data.

Powell said on Wednesday he does not think the country is currently in a recession because “there are too many areas of the economy that are performing too well”.

Mike Fratantoni, chief economist of the Mortgage Bankers Association, was among those who echoed Powell’s view, saying “the ongoing strength in the job market and other signs of growth make it unlikely that this will be categorized as a recession”.

Powell also said it is possible to cool price pressures without causing a downturn or a big jump in joblessness, although he acknowledged the path to thread that needle is narrowing.

But economist Mohamed El-Erian said on Twitter that the data point to “deepening stagflation and flashing red recession risk”.

That impression may be the one that sticks in the minds of investors and consumers.

Wall Street was not happy with the data. After big jumps in the wake of the Fed rate increase, all three major stock indices were lower in mid-morning trading. – AFP