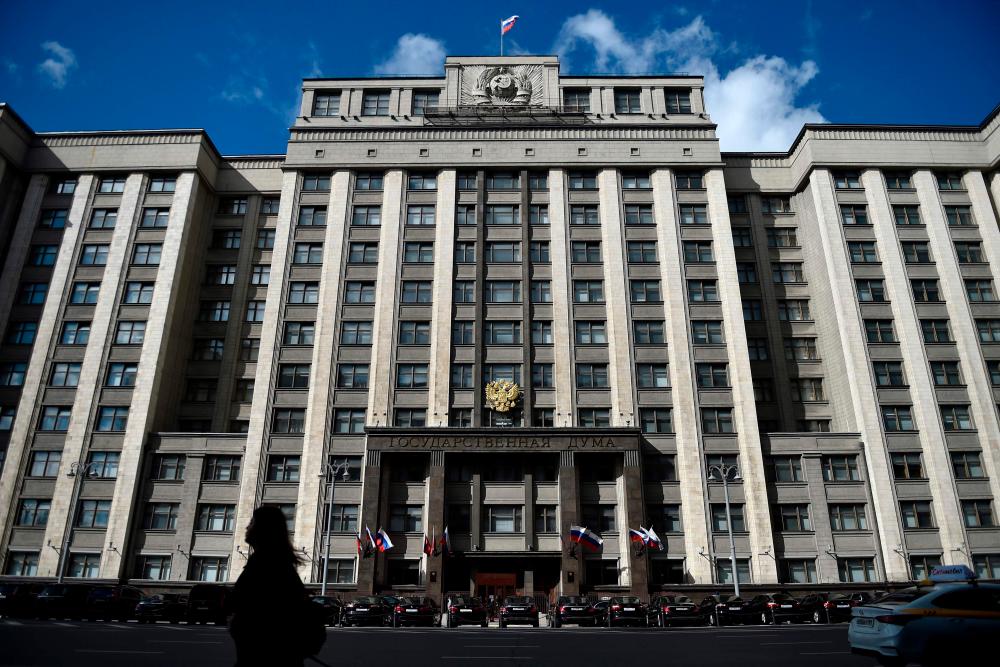 A general view of the building of the State Duma, the lower chamber of Russia's parliament, in Moscow. Russia is facing a prolonged budget deficit amid weak oil prices. – AFPPIX

The move, estimated to bring in at least 90 billion roubles (RM4.96 billion) a year, comes as Russia is facing a prolonged budget deficit amid weak oil prices and after Moscow stepped up its support for Belarus which includes a US$1.5 billion loan (RM6.2 billion).

Russia is considering tripling the mineral extraction tax (MET) on metals and fertiliser producers, industry sources told Reuters, and plans to scrap a zero MET on high-viscosity oil from 2021, a draft law seen by Reuters showed.

In addition, Moscow wants to increase the excise tax on cigarettes by 20% next year, the RBC newspaper said separately.

"When it is difficult, everyone should be involved in solving the problems which the country and its people are facing," Prime Minister Mikhail Mishustin told a government meeting on Wednesday.

He described the proposal, yet to be finalised, as "slightly increasing taxes on a number of profitable sectors".

Miners of gold, diamonds and coal are not included in the finance ministry's proposal for mining companies which is estimated to bring an additional 90 billion roubles a year alone, the sources said.

The tax rise under review, which would hit Russia's top players such as Norilsk Nickel, Rusal, Phosagro, NLMK, Severstal and Evraz, would be introduced from 2021, the sources said.

Shares across Russian metals and mining companies, as well as of the Russian oil producer Tatneft which is focusing on high-viscosity oil projects, fell on Wednesday on the tax change proposals.

A higher tax would hit Russia's emerging and state nurtured production of rare earth minerals, the industry ministry said in a letter to the government, a copy of which was obtained by Reuters.

"The finance ministry, facing the budget deficit, is looking for sources to increase the budget revenues. This is a perfectly normal process," Kremlin spokesman Dmitry Peskov told reporters on Wednesday, adding that the final decision was yet to be made. – Reuters I was not asked to assess RM1 mln received by Shahrir: IRB officer I was not asked to assess RM1 mln received by Shahrir: IRB officer

1.I was not asked to assess RM1 mln received by Shahrir: IRB officer