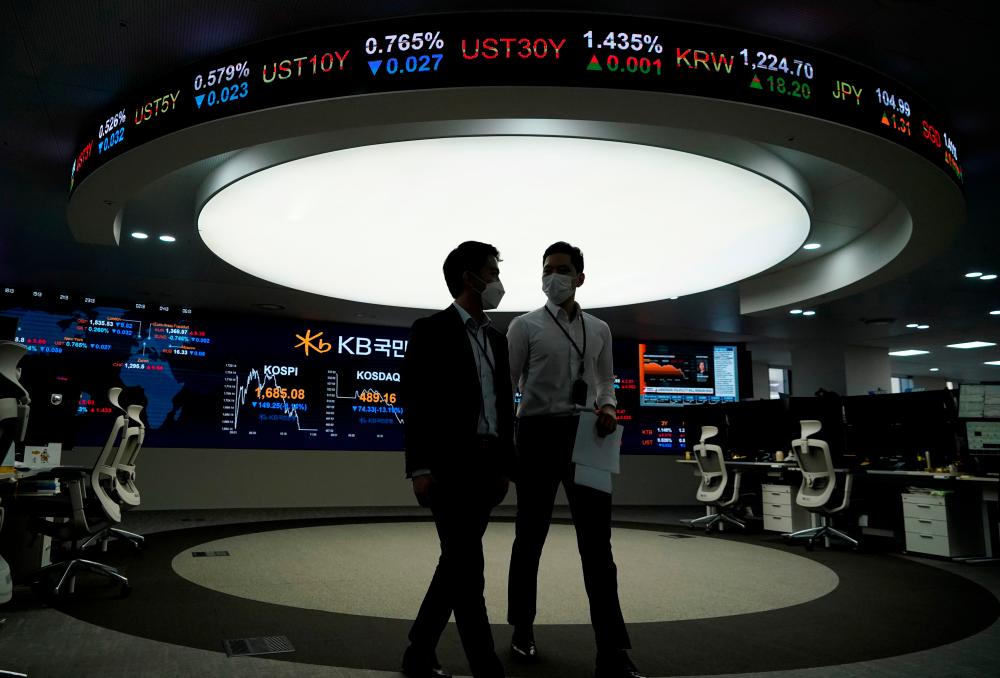 MSCI's broadest index of Asia-Pacific shares outside Japan added 0.2%, after slipping from a record top last week as the jump in U.S. bond yields unsettled investors.

S&P 500 and EUROSTOXX 50 futures were both hesitating around flat, while FTSE futures fell 0.6%.

Bonds have been bruised by the prospect of a stronger economic recovery and yet greater borrowing as President Joe Biden's $1.9 trillion stimulus package progresses.

"This in principle signals a better medium-term growth outlook for the U.S. and beyond, as other core yields curves are moving in the same direction," he added. "Meanwhile, central banks seem set to look through this year's inflation increase, keeping the curves' front end anchored."

Federal Reserve Chair Jerome Powell delivers his semi-annual testimony before Congress this week and is likely to reiterate a commitment to keeping policy super easy for as long as needed to drive inflation higher.

Yields on 10-year Treasury notes have already reached 1.38% , breaking the psychological 1.30% level and bringing the rise for the year so far to a steep 43 basis points.

One of the stars has been copper, a key component of renewable technology, which shot up 7.7% last week to a nine-year peak. Even the broader LMEX base metal index climbed 5.5% on the week.

Oil prices have gone along for the ride, aided by tightening supplies and freezing weather, giving Brent gains of 22% for the year so far.

All of which has been a boon for commodity linked currencies, with the Canadian, Australian and New Zealand dollars all sharply higher for the year so far.

Sterling reached a three-year top at $1.4050, aided by one of the fastest vaccine rollouts in the world. British Prime Minister Boris Johnson is due to outline a path from COVID-19 lockdowns on Monday.

The U.S. dollar index has been relatively range-bound, with downward pressure form the country's expanding twin deficits balanced by higher bond yields. The index was last at 90.341 , not far from where it started the year at 90.260.

Rising Treasury yields has helped the dollar gain somewhat on the yen to 105.60, given the Bank of Japan is actively restraining yields at home.

One commodity not doing so well is gold, partly due to rising bond yields and partly as investors question if crypto currencies might be a better hedge against inflation.