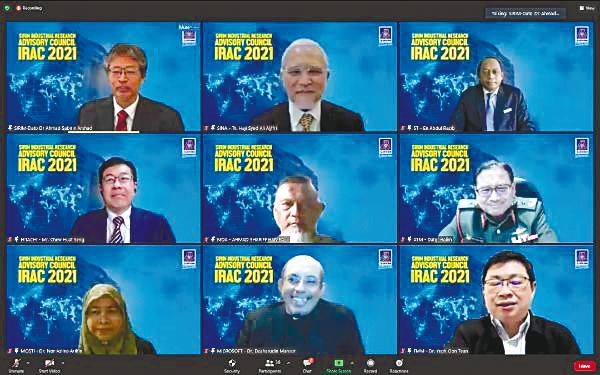 Ahmad Sabirin (top left) giving a speech during the online meeting of Sirim Irac on Monday.

It said the members of the advisory council comprises industry leaders from Europe, Asia Pacific, and the Middle East.

“The frontier technology includes artificial intelligence to robotics, quantum computing to biotechnology, Internet of Things, nanotechnology, and wireless technologies. Sirim is also aligning its research activities in line with the recently launched National 4IR Policy, which is set to transform Malaysia into a high-income nation driven by the most advanced 4IR technology and digitalisation,“ he announced at the Sirim Industrial Research Advisory Council virtual meeting on Monday.

He added that Sirim also played a crucial role to ensure the Covic-19 vaccines meet the international standards for safety, efficacy, and manufacturing.

“In a move to support the pharmaceuticals and medical device industries in meeting the requirements by the regulatory authorities, Sirim’s Industrial Biotechnology Research Centre is moving towards vaccine development programme and is already conducting various levels of testing to ensure the safety of Sinovac vaccine such as Safety Test-Abnormal Toxicity Tests and Immunoassay (relative potency),” he said.