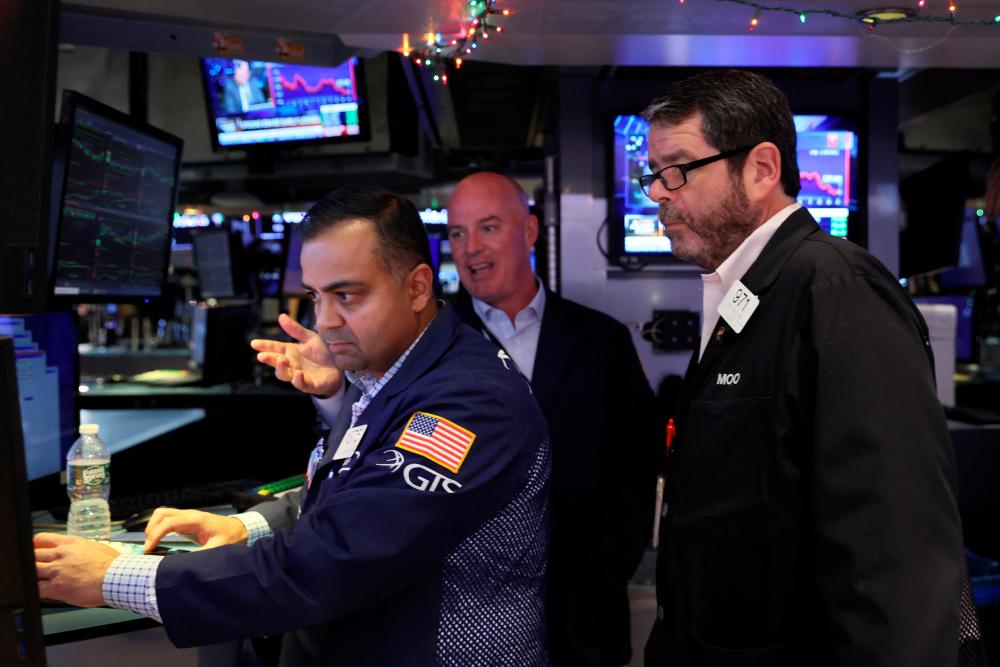 Traders working on the floor of the New York Stock Exchange.– Reuterspic

Shares of Apple and Amazon gained along with those of chip companies like Nvidia, advancing as equities sought to recover from a slump thus far in December, a typically strong month for stocks.

The market this week has been buffeted by recession worries and fears that the Federal Reserve will maintain its aggressive posture to counter surging inflation.

“The market has to adjust to the fact that we’re moving from a stimulus-based economy – both fiscal and monetary – into a fundamentals-based economy, and that’s what we’re grappling with right now,” said Wiley Angell, chief market strategist at Ziegler Capital Management.

The gains come ahead of today's (Dec 9) data on wholesale prices, a precursor to next week's anticipated reading on consumer costs.

Among individual companies, Microsoft rose 1.2% as the US Federal Trade Commission sued to block its US$69 billion buyout of gaming giant Activision Blizzard, raising doubts on the future of the transaction.

Officials from both companies expressed confidence the deal will still close. Shares of Activision fell 1.5%.

ExxonMobil rose 0.6% after the oil giant said it would boost its share buyback programme to US$50 billion, rebuffing calls from President Joe Biden to steer extra cash towards increasing energy production.

ExxonMobil, which has enjoyed record profits in 2022, said it plans to maintain its annual capital budget of US$20 billion to US$25 billion through 2027. – AFP, Reuters 2.Half a million strike in UK as cost-of-living crisis bites

5.New restrictions against Taliban for bans on women