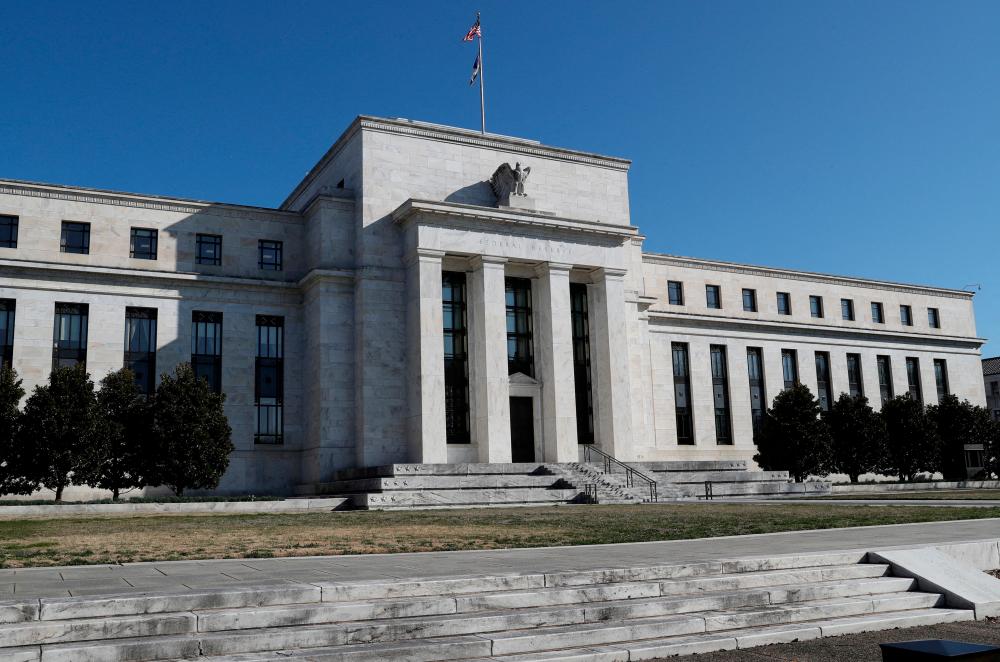 The Federal Reserve Board building in Washington. The Fed subjected 33 banks to its annual “stress test” exercise, to gauge whether they would be able to weather a steep global recession. REUTERSpix

WASHINGTON: The largest US banks yesterday easily cleared the Federal Reserve’s (Fed) annual health check, in a vote of confidence for the sector amid signs the US economy could tip into a recession in the months ahead.

The results of the Fed’s annual “stress test” exercise showed the banks have enough capital to to weather a severe economic downturn and paves the way for them to issue share buybacks and pay dividends.

The 34 lenders with more than US$100 billion (RM440 billion) in assets that the Fed oversees would suffer a combined US$612 billion in losses under a hypothetical severe downturn, the central bank said.

But that would still leave them with roughly twice the amount of capital required under its rules.

As a result, banks including JPMorgan Chase, Bank of America, Wells Fargo, Citigroup, Morgan Stanley and Goldman Sachs can use their excess capital to issue dividends and buybacks to shareholders. Those plans can be announced after the close of trading on Monday.

“We view this as about as positive for the big banks as one could expect from the annual stress test,” Jaret Seiberg, an analyst with Cowen Washington Research Group, said in a research note. “Banks didn’t just perform well. The test showed they could weather a severe downturn with plunging commercial real estate and equity values and surging unemployment levels.”

The country’s largest banking group hailed the results as a sign of the sector’s strong financial health. But Sherrod Brown, the Democratic chair of the US Senate Banking Committee, criticised the exercise as not rigorous enough.

Under the annual stress test exercise established following the 2007-2009 financial crisis, the Fed assesses how banks’ balance sheets would fare against a hypothetical severe economic downturn. The results dictate how much capital banks need to be healthy and how much they can return to shareholders.

While the 2022 scenarios were devised before Russia’s invasion of Ukraine and the current hyperinflationary outlook, they should give investors and policymakers comfort that the country’s banks are well-prepared for what economists warn is a potential US recession later this year or next.

The 34 banks suffered heavy losses in this year’s scenario, which saw the economy contract 3.5%, driven in part by a slump in commercial real estate asset values, and the jobless rate jumping to 10%. But even then, the Fed said aggregate bank capital ratios were still roughly twice the minimum amount required by regulators.

In 2020 the Fed scrapped the “pass-fail” test model and introduced a more nuanced, bank-specific capital regime.

The test assesses whether banks would stay above the required minimum 4.5% capital ratio – a measure of the cushion banks have to absorb potential losses. Banks that perform well typically stay well above that.

The average capital ratio for the 34 banks was 9.7%, the Fed said. That compares with 10.6% last year, when the Fed tested 23 lenders against a slightly easier scenario.

The average ratio for the country’s eight “globally systemically important banks”, or GSIB, under the test was 9.64%, according to a Reuters analysis of the results.

Shares in Bank of America, which had the lowest ratio of the GSIB at 7.6%, slipped in after hours trading, as did shares in Citigroup, whose ratio stood at 8.6.%. Shares in State Street , whose ratio came in at 13.2%, jumped slightly.

The US units of major European lenders including Deutsche Bank, Barclays and Credit Suisse sailed through the Fed’s stress tests, showing they hold enough capital to weather an economic shock.

For the seven European bank subsidiaries the Fed oversees with more than US$100 billion in assets, the average capital ratio remained well above the regulatory minimum of 4.5%.

It was also higher than the average ratio for the broader group of 34 banks tested, according to a Reuters analysis of the results.

The average capital ratio for the seven European lenders stood at 15.2%, compared with 9.7% for the 34 banks.

Deutsche Bank's US operations had the highest ratio of all banks at 22.8%, while Credit Suisse was the third-highest of the group with a ratio of 20.1%. HSBC was the straggler of the foreign pack with a ratio of 7.7%.

The European Banking Authority is scheduled to run its next EU-wide stress test in 2023 but investors are on high-alert for evidence of a fall in asset quality at European banks, as borrowing rates begin to rise from historic lows. – Reuters 5.Ringgit slips further against US dollar at opening