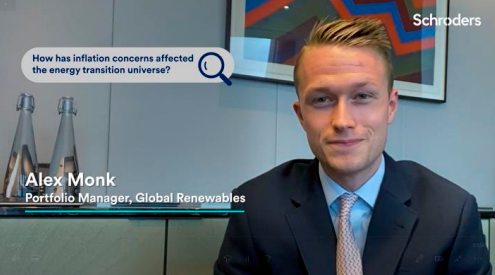 PETALING JAYA: Consumer demand for electric vehicles, heat pumps, residential solar and other applications continues to grow and policy support around the world is becoming a lot more aligned towards supporting energy transition to cut carbon emissions, according to asset management company Schroders.

Schroders identified three key structural shifts in energy transition that are creating opportunities for investors across a number of sectors.

First, the decarbonisation of power generation, replacing electricity produced by coal and gas with electricity generated from renewables such as wind and solar.

Third, improving efficiency of energy consumption, using distributed energy production to produce electricity at the point of use.

“All three of these structural shifts are required to reach our net zero goals within our energy system, and we have continued to see increased momentum of these shifts over the past six months. Costs continue to fall, not only in renewables, but also in items like batteries and hydrogen,“ its global renewables portfolio manager, Alexander Monk (pix), said in a statement.

Monk said the US President Joe Biden recently announced details of his US$2 trillion (RM8.36 trillion) infrastructure plan to modernise and cut emissions from the power sector, with the eventual goal of producing 100% carbon-free electricity by 2035.

“We are also starting to see some of the conventional oil majors accelerating their business shifts, driven primarily by climate change activists and active asset managers, like Schroders. We continue to believe that these existing energy companies accelerating the shift in their business models is ultimately very healthy for the broader energy transition ecosystem and those companies themselves,“ he said.

Monk said two distinct concerns around inflation are at the front of investors’ minds over the last few months.

“The first concerns near term supply chain bottlenecks and the impact the rising input and logistics costs could have on company earnings, both this year and beyond. We have already seen a significant increase in the cost of key raw materials, such as copper, steel and aluminium, as well as an even larger rise in the price that companies need to pay to ship goods around the world.

“The second inflation threat concerns the potential for longer term, more pervasive inflation, and the potential impact that this could have on interest rates and subsequently, financing costs and growth company valuations across the energy transition landscape.

“While we are concerned about these short-term inflation threats, our longer-term view about the energy transition opportunity continues to go from strength to strength, as the fundamental drivers behind the space grow ever stronger. Valuations have also pulled back from their lofty highs at the start of this year, presenting a number of attractive opportunities for investors,“ Monk said.