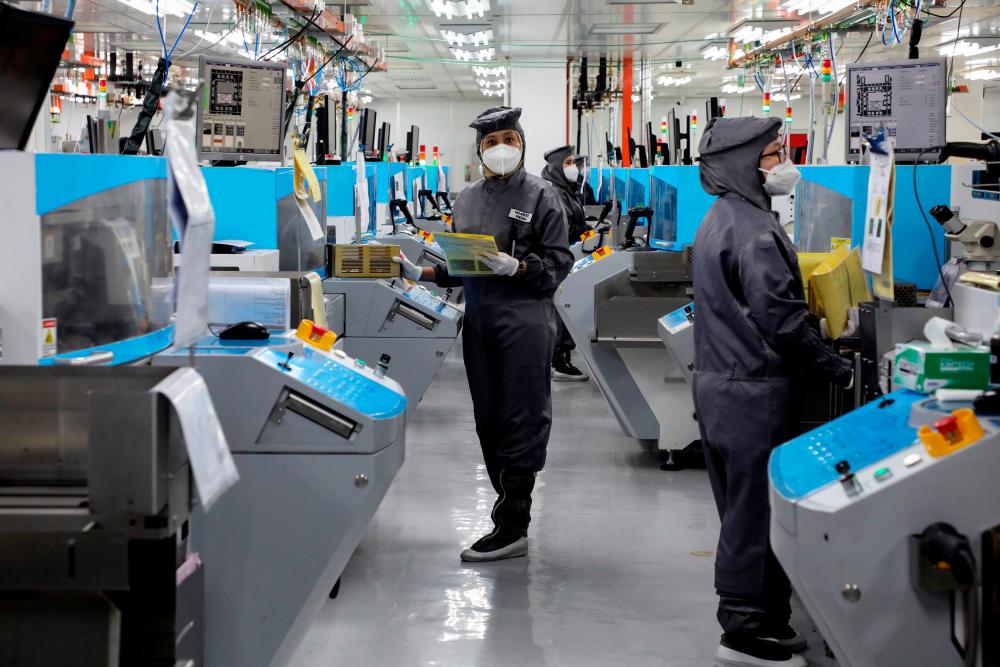 KUALA LUMPUR: Malaysian electronics firms central to the supply of basic chips that drive the world's cars, smartphones and home devices say big-name customers are beating on their doors to lock in take-or-pay, longer-term deals – and happy to pay more if need be.

Manufacturers are rushing to replenish chip stocks depleted during coronavirus pandemic factory curbs – not least automakers who earlier cancelled orders expecting poor demand. That chip shortage has slammed their output, and still dislocates supply chains, just as consumer demand ramps up along with a global easing of Covid restrictions in everyday life.

At factories in Malaysia, operators like chip packaging firm Unisem say that drive is leading buyers that sell chips on to auto and electronics manufacturers to become willing to sign up for big price hikes, some even asking for as many assembled chips as plants can produce - whatever the cost.

But Malaysia's chip assembly industry, accounting for more than a tenth of a global trade worth over US$20 billion (RM83 billion), warns that shortages – exacerbated by years of under-investment in basic chip production, while high-end semiconductors were favoured – will last at least two years.

Firms must marry the need to ramp up production with the imperative to avoid Covid-19 infections in factories that could trigger complete shutdowns.

“The shortage is very real,” said John Chia, chairman of Unisem. “For CEOs (of our clients) to escalate their issues to me directly shows that this is a serious matter ... now they want to talk to me directly,” he told Reuters.

Chia declined to provide names of clients requesting as much supply as they can get their hands on. Unisem's customers include suppliers to global carmakers and electronics firms like Apple.

He said demand is so robust that its Chengdu plant in China is booked out for the whole of next year – and it will take months for it to clear backlogs for some automotive components.

Pre-pandemic, the world's outsourced chip assembly and test industry was estimated worth around US$23 billion and it is seen growing to US$30 billion in 2022, according to market research firm Yole Development.

Taiwan is the biggest service provider with more than 50% of market share, followed by China, the United States and then Malaysia. The latter is home to suppliers and factories serving chipmakers such as STMicroelectronics and Infineon , and carmakers including Toyota Motor Corp, Ford Motor Co and General Motors.

Datuk Seri Wong Siew Hai, president at the Malaysia Semiconductor Industry Association, warns the shortage is likely to last for years. Some customers are ordering more than they need to lock in supplies, Wong said, while long-term contracts that range from one to three years have now become a new industry norm.

“For the capacity to match demand, (it will take) at least two to three years from now,” Wong told Reuters.

Companies like Unisem have been ramping up. But Unisem, with a market value of about US$1.6 billion, is still operating just 80% of its capacity, to reduce a risk of mass infections on its factory floor that could lead to an entire plant shutdown.

While 98% of its staff are now fully vaccinated, it has been forced to temporarily shut down its Ipoh plant, in northwestern Malaysia, twice since June due to an outbreak in the factory and a national lockdown order. Several automakers and semiconductor companies have said pandemic-related disruption in Malaysia has hit supply chains.

GM’s CEO Mary Barra explained earlier this month to Fox Business that, “We were hit maybe harder than most because some of the specific facilities in Malaysia were heavily impacted by Covid.”

The gradual ramp-up at Unisem matches that of many of its peers.

Despite surging orders, Globetronics Technology, which makes optical sensors, light-emitting diodes and integrated circuits for the likes of Apple, Samsung Electronics and German carmakers, says it's running 90% of its factory capacity – and is also worried about rising costs.

“We’ve had to stay adaptable and mindful of workers’ wellbeing during the lockdowns, including offering various types of incentives like cash to keep employees motivated and productivity high,“ Heng Charng Yee, vice president of business and operations, told Reuters.

Investors and analysts say the shortage is also the fruit of under-investment in technology to make older-generation chips that can cost less than US$1, widely used in auto industry, as heavyweights such as Samsung and TSMC ploughed billions into developing more powerful, high-end chips.

Amid such demand, Unisem is pushing ahead with expansion at its plants in Malaysia and China – which will only come on stream 12-15 months down the line.

“We are cautious,” said chairman Chia. “We have been hit blue and black before, remember the dotcom days?”

“We tell them (customers) now to at least sign up for 70% of their forecast (volume). If they don’t give me that full amount, they will still have to pay.”