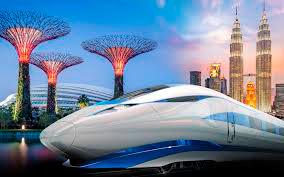 AmResearch says the recent termination of the KL–Singapore high-speed rail project should serve as a wake-up call to the market. Picture for illustration only. – BERNAMAPIX

PETALING JAYA: The uncertainty surrounding the 12th Malaysia Plan (12MP), slated to be tabled in parliament in March, looms over the construction sector, according to AmInvestment Bank Research (AmResearch).

Since the declaration of a state of emergency close to a month ago which entailed the suspension of parliament, it pointed out that it is unclear whether the tabling of the 12MP (2021-2025) would be postponed or rolled out without the scrutiny of parliament.

If the five-year development plans get passed without scrutiny, the research house cautioned that the legitimacy of the plan could be subject to challenges in the future.

It highlighted that the previous 11MP which was tabled by former prime minister Datuk Seri Najib Razak was debated in parliament for five days, while the replies were heard for three days before getting approval. In total the process took close to a month to complete the process.

AmResearch stated that this has reinforced is underweight stance on the construction sector over the next six to 12 months.

“The uncertainty surrounding the 12MP aside, we maintain our view that the government will have very limited room for fiscal manoeuvre given the elevated national debt, weighed down further by the economic impact of the pandemic (including reduced tax and petroleum revenues), as well as the massive relief spending to cushion the economic impact of the pandemic,” it said in a report yesterday.

“We believe the recent termination of the KL–Singapore high-speed rail project should serve as a wake-up call to the market.”

Furthermore, it pointed out that construction players are also subject to higher operating cost and lower efficiency, due to restrictions on working hours and worker density on the site, and the compliance with the Worker’ Minimum Standards of Housing and Amenities Act 1990.

There is also higher operating risk attributed to the potential stop-work order or enhanced movement control order (EMCO) on the dormitory in the event of Covid-19 infections, shortage of foreign workers as borders remain largely closed and the policy to reduce the country’s reliance on foreign workers.

Given the uncertainty of public infrastructure project rollout locally, AmResearch observed that some players have ventured or returned to overseas markets.

For instance, Sunway Construction in 2020 bagged two highway projects worth more than RM800 million in India on a hybrid annuity model, while Econpile secured a US$85.7 million (RM347.6 million) piling and substructure work subcontract for an “integrated entertainment complex” in Phnom Penh, Cambodia. Meanwhile, Gamuda has been shortlisted for two tunnelling packages of the A$20 billion (RM60 billion) Sydney Metro West and the A$2.6 billion Sydney M6 motorway in Australia.

The research house stated it might upgrade its call to the sector to neutral or overweight, if the government decides to forge ahead with the implementation of key public infrastructure projects, despite the weak fiscal position.

Overall, it does not have any top picks for the sector.