US economy posts record 33.1% growth in Q3 but Covid-19 scars to last a year or more 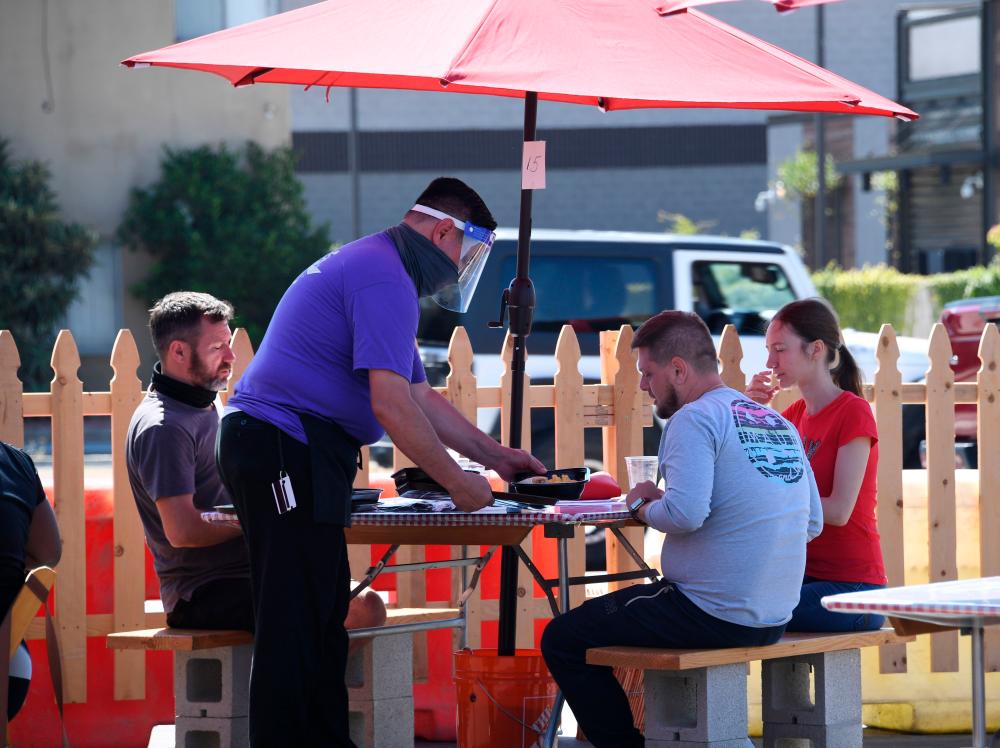 A waiter serves food to customers on the patio at Pann's, an iconic Los Angeles, California, restaurant and coffee shop, on July 4. Spending on services increased in the third quarter of 2020, thought it remained below its fourth quarter 2019 level. – AFPPIX

WASHINGTON: The US economy grew at a record pace in the third quarter as the government injected more than US$3 trillion (RM12.46 trillion) worth of pandemic relief which fuelled consumer spending, but the deep scars from the Covid-19 recession could take a year or more to heal.

Though the Commerce Department's report on Thursday on gross domestic product (GDP) – one of the last major economic scorecards before next week's presidential election – was one for the history books, it did little to ease the human tragedy inflicted by the coronavirus pandemic, with tens of millions Americans still unemployed and more than 222,000 dead.

With five days remaining to Election Day President Donald Trump, trailing in most national opinion polls, will likely seize on the stunning rebound in GDP as a sign of recovery. But output remains below its level in the fourth quarter of 2019, a fact Trump's Democratic challenger Joe Biden is almost certain to highlight along with signs that the growth spurt is fast petering out.

Gross domestic product rebounded at a 33.1% annualised rate last quarter, the Commerce Department said in its advance estimate on Thursday. That was the fastest pace since the government started keeping records in 1947 and followed a historic shrinkage rate of 31.4% in the second quarter.

On a year-on-year basis GDP jumped 7.4% last quarter after sinking 9.0% in the April-June period. Output is 3.5% below of its level in the fourth quarter. The rebound reversed about two-thirds of the drop in GDP in the first half.

Economists polled by Reuters had forecast the economy expanding at a 31% rate in the July-September quarter. The economy slipped into recession in February.

The government's rescue package provided a lifeline for many businesses and the unemployed, juicing up consumer spending, which on its own powered the surge in GDP.

But government funding has been depleted with no deal in sight for another round of relief. New Covid-19 cases are spiralling across the country, forcing restrictions on businesses like restaurants and bars.

Personal income tumbled at a US$540.6 billion rate in the third quarter after surging at a US$1.45 trillion pace in the second quarter. The decrease in income was attributed to declines in government transfers related to the pandemic relief programmes. With the labor market recovery slowing, the outlook for consumer spending is cloudy.

Just over half of the 22.2 million jobs lost during the pandemic have been recouped, and layoffs persist.

Consumer spending, which accounts for more than two-thirds of the US economy, rebounded at a historic rate of 40.7% in the third quarter, driven by purchases of goods like motor vehicles, clothing and footwear. Spending on services increased, thought it remained below its fourth quarter level.

Spending was boosted by billions of dollars in government transfers, including a US$600 weekly unemployment subsidy and a one-off US$1,200 cheque to households.

The shift toward goods spending pulled in imports, resulting in a widening of the trade deficit. Some of the imports, however, ended up in warehouses. The accumulation of inventory offset the trade hit to GDP growth.

There was also a turnaround in business investment after the second-quarter drubbing, but economists believed the bounce would be temporary as demand for goods that do not complement life-style changes brought by Covid-19 remains weak. The pandemic has also crushed oil prices, weighing on spending on nonresidential structures like gas and oil well drilling.