US labour market in spotlight as jobless benefits claims jump 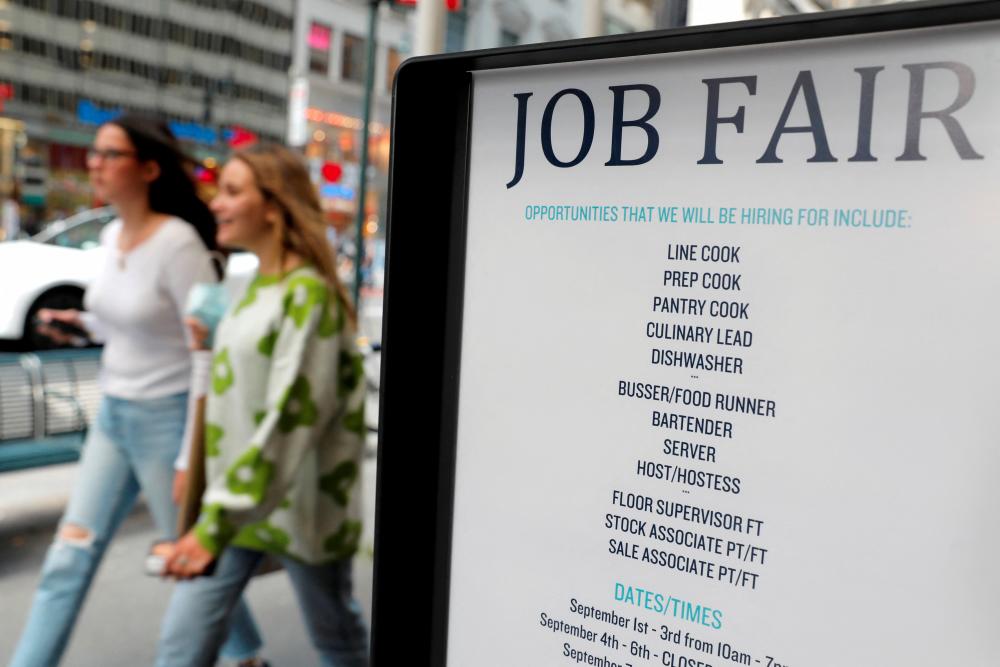 Signage for a job fair is seen in Manhattan, New York City. REUTERSpix

WASHINGTON: The number of Americans filing new claims for unemployment benefits unexpectedly rose last week, reaching a four-month-high and potentially hinting at some cooling in demand for workers amid tightening financial conditions.

Still, the labour market remains tight as the report from the Labor Department yesterday also showed the ranks of the unemployed were the smallest in almost 52½ years in early May. Signs of ebbing demand for labour were also evident in a survey from the Philadelphia Federal Reserve, showing a decline in the share of firms reporting higher employment levels and the average work at factories in the mid-Atlantic region this month.

The Federal Reserve’s aggressive monetary policy stance as it fights inflation has sparked a stock market sell-off and boosted US Treasury yields and the dollar. Several retailers, including Walmart Inc, this week cut their full-year earnings forecasts, warning that inflation was squeezing profits.

“This will lead to slower job growth in the retail and e-commerce industries,” said Bill Adams, chief economist at Comerica Bank in Dallas, Texas. “The stock market sell-off could dampen business sentiment and make some businesses more cautious about hiring, especially those that are cash-flow negative and rely on investors’ money to fund operations like many startups.”

Initial claims for state unemployment benefits increased 21,000 to a seasonally adjusted 218,000 for the week ended May 14, the highest level since January. Economists polled by Reuters had forecast 200,000 applications for the latest week.

There was a jump of 6,728 in claims in Kentucky, while California reported an increase of 3,315. There were also notable gains in filings in Pennsylvania, Ohio and Illinois.

Claims have been largely treading water since hitting more than a 53-year low of 166,000 in March. They have dropped from an all-time high of 6.137 million in early April 2020.

Some economists viewed the rising claims as the start of the normalizing process for the labor market after distortions caused by the Covid-19 pandemic. There were a record 11.5 million job openings as of the end of March and an all-time high of 4.5 million people quit their jobs.

The misalignment between supply and demand is generating strong wage gains that are helping to fan overall inflation in the economy. The Fed has raised its policy interest rate by 75 basis points since March. The US central bank is expected to increase the overnight rate by half a percentage point at each of its next meetings in June and July.

“The tight labour market has likely caused employers to focus on employee retention, resulting in much lower-than-normal initial claims,” said Isfar Munir, an economist at Citigroup in New York. “The increase we are seeing now could just be a first step towards normalizing labor markets.”

Last week’s data covered the period during which the government surveyed employers for the non-farm payrolls portion of May's employment report. Claims rose between the April and May survey period.

The number of people receiving benefits after an initial week of aid fell 25,000 to 1.317 million during the week ending May 7. That was the lowest level for the so-called continuing claims since December 1969. Continuing claims have been trending lower even as initial applications for benefits have risen.

“One possible explanation for the recent combination of initial claims trending higher and continuing claims trending lower is that layoffs have picked up but people are still able to easily find other jobs,” said Daniel Silver, an economist at JPMorgan in New York.

In a separate report on Thursday, the Philadelphia Fed said its business conditions index dropped to a two-year low reading of 2.6 in May from 17.6 in April. A reading above zero indicates growth in manufacturing in the region that covers eastern Pennsylvania, southern New Jersey and Delaware.

The survey’s measure of factory employment dropped to 25.5 from 41.4 in April. Its gauge of the average workweek fell to 16.1 from 20.8 in the prior month. Nearly 27% of the firms surveyed reported increasing workers, the lowest in a year and down from 42% in April. Those reporting no change in head count reached 71%, the highest since December 2020.

There was also disappointing news on the housing market.

Existing home sales fell 2.4% to a seasonally adjusted annual rate of 5.61 million units last month, the lowest level since June 2020 when sales were rebounding from the coronavirus lockdown slump, the National Association of Realtors said in a third report.

While monthly sales declined for a third straight month, the median existing house price shot up 14.8% from a year earlier to an all-time US$391,200 (RM1.7 million) amid a persistent lack of inventory. With the rate on a 30-year fixed-rate mortgage well above 5%, sales are likely to maintain their downward trend. – Reuters