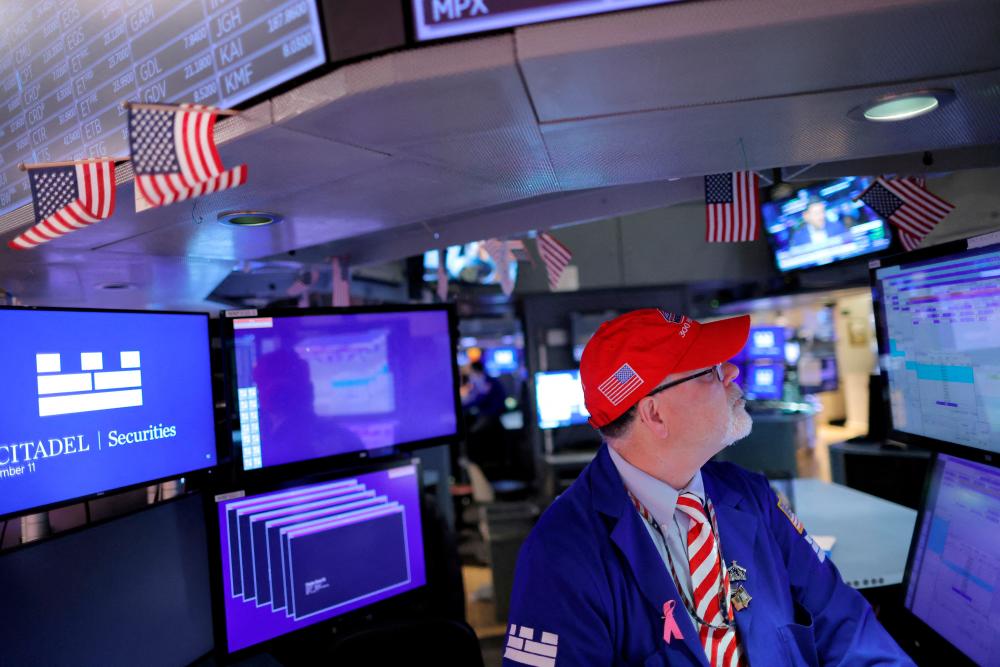 A trader working on the trading floor at the New York Stock Exchange. – Reuterspic

JPMorgan Chase chief executive Jamie Dimon reiterated that he saw the chance for a “mild to hard recession” next year in an interview with CNBC, while Goldman Sachs chief David Solomon offered a similar appraisal in a public appearance.

“The data looks increasingly like 2023 is going to include a recession,” said Merk Investment’s Nick Reece. “I don’t think a recession has been ... adequately priced into the markets.”

Monday's losses added to the toll this week after major indices also fell more than 1% on worries that a recent batch of solid US economic data will prolong the Federal Reserve's aggressive policies to counter inflation.

Facebook parent Meta suffered an even bigger drop of nearly 7% after the European Data Protection Supervisor said it would take action against the company over its use of personal data for targeted advertising.

EDPS did not give details or recommend fines, but critics have accused the social media giant of flouting intended to protect consumer data.

Most of the 11 major S&P sectors were lower, with energy and communications services joining technology as leading laggards. Utilities, a defensive sector often preferred during times of economic uncertainty, fared better.

He noted that, while markets traditionally reflect the future, right now they are moving up and down based on the latest headlines.

The S&P 500 rallied 13.8% in October and November on hopes of smaller rate increases and better-than-expected earnings, although the expectation for slower rate hikes could be undermined by further data releases, including producer prices due out on Friday.

“The market got ahead of itself at the end of November, but then we got some good economic data, so people are re-evaluating what the Fed is going to do next week,“ said Bel Air’s Sadkin.