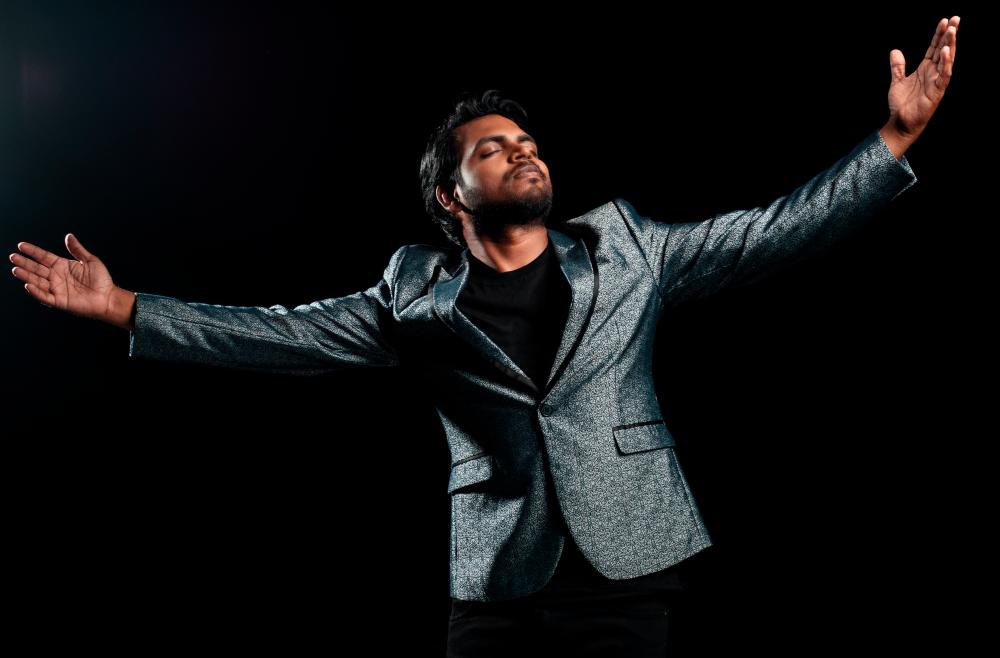 The 34-year-old singer and composer set this unbreakable record on Oct 24 by releasing 24 individual tracks on the Rentak Angkasa Youtube channel.

In a Skype interview with theSun, Santesh – who hails from Golcoda Estate in Kapar, Selangor – explained his journey through the music industry, and his inspirations.

Santesh’s dream to be a world famous musician started from the tender age of six. This could have been largely due to the fact that both his father and grandfather were musicians as well.

His father led his own band, and also played the keyboard and guitar. The band was known as Sri Vani in the 70s, and Sri Kalai Vani in the 90s. Santesh actually began singing as part of the band during his kindergarten days.

His grandfather Ulaganathan, known as ‘Ulaganathan Vathiyar’, was a music teacher. During the 1950s and 1960s, he composed music for musical theatre productions on harmonium, and led a drama troupe.

Santesh grew up hearing stories about his grandfather and his musical works from his father.

The success of local Indian rocker Darkkey Nagaraja inspired Santesh to pursue a career in music. A band founded by Darkkey, known as The Keys, released its debut album Akkamage in 1996.

“I have been following the progress of [bands in] the local music industry since [the 1990s] and even collect all their albums,” said Santesh.

Santesh adds that he keeps up with all local songs and listens to them alongside songs from India.

On the world stage, Santesh’s inspiration was Michael Jackson, the King of Pop.

He used to watch all of his music videos and felt inspired by them, wishing to be a rock star like him.

When we asked who his favourite musician was, he named famous playback singer Sripathi Panditaradhyula Balasubrahmanyam, better known as SPB or SP Bala.

Santesh said: “I used to listen to his songs, mostly his melodic songs, aired on the radio FM and was inspired by his voice.”

Santesh composed his first solo track Endrum En Kadhaley in 2003, when he was in Form Three. He mentioned that he was influenced by Backstreet Boys’ 2001 hit song Drowning.

He adapted the English lyrics to Tamil and used a similar tune. He sang a couple lines from his track for us throughout the interview.

We also asked him about his breakthrough single Amalina, which was released in Malay and Tamil. The music video for the Tamil version of the song set a new milestone by receiving over a million views on Youtube in just three days.

His achievement earned him a place in the Malaysia Book of Records.

He explained: “I didn’t anticipate it to break the record, and I’m grateful to be one of the non-Malay artistes who has received positive feedback from Malay music lovers.

“Aside from the power of the song, it would not have been a hit if everyone at the music label, including its marketing team, had not put in the hard work and commitment.”

His most recent record in the Malaysian Book of Records was for his herculean effort to release 24 songs in 24 hours. “It was pre-planned to go under the label Rentas Angkasa,” he told theSun.

We asked what was the story behind the idea for the project. He replied: “Actually two weeks before this project [started], my close friend Selvakumar, suggested why not try to release 24 songs in a day (24 hours).

“In the same week, my wife Rajeswary mentioned the same idea at home.”

The coincidence surprised him. “It struck me, it was something [in] nature telling me,” he said.

He and his team had to work fast. They composes and recorded the 24 songs in just under two weeks and arranged to release them all on Oct 24, which was also Deepavali. “So that everyone can celebrate it on that day,” Santesh added.

What is the difference between releasing these 24 songs on the same day, versus compiling them into an album? According to Santesh, the difference is that 24 tracks in an album will be classified as one CD, however posting several songs under a playlist on YouTube is different.

“No one had ever attempted a YouTube record as a live event by releasing 24 songs in 24 hours before, so I jumped at the chance to make it happen,” he explained.

We also asked him about ultimate goal. “Before this, I wanted to be a playback singer, but now I want to produce music for a full Kollywood film,” he replied.

“I want to produce the entire song package; it can be a low-key film or a big film; I want the songs to carry the entire film along.”

If given the opportunity, he stated: “I will seize it and prove to myself that I am capable of producing songs in India.”

Asked what advice he would give to newcomers or amateur musicians wanting to break into the music industry, he said: “Don’t sit around waiting for someone to give you a platform. If you do, you will have to wait indefinitely. Create your own platform to showcase your abilities.”

Check out his label’s YouTube channel Rentas Angkasa for further updates on his new and upcoming songs. 3.Spurring optimism after being struck by blindness