Inside the enchanted cave 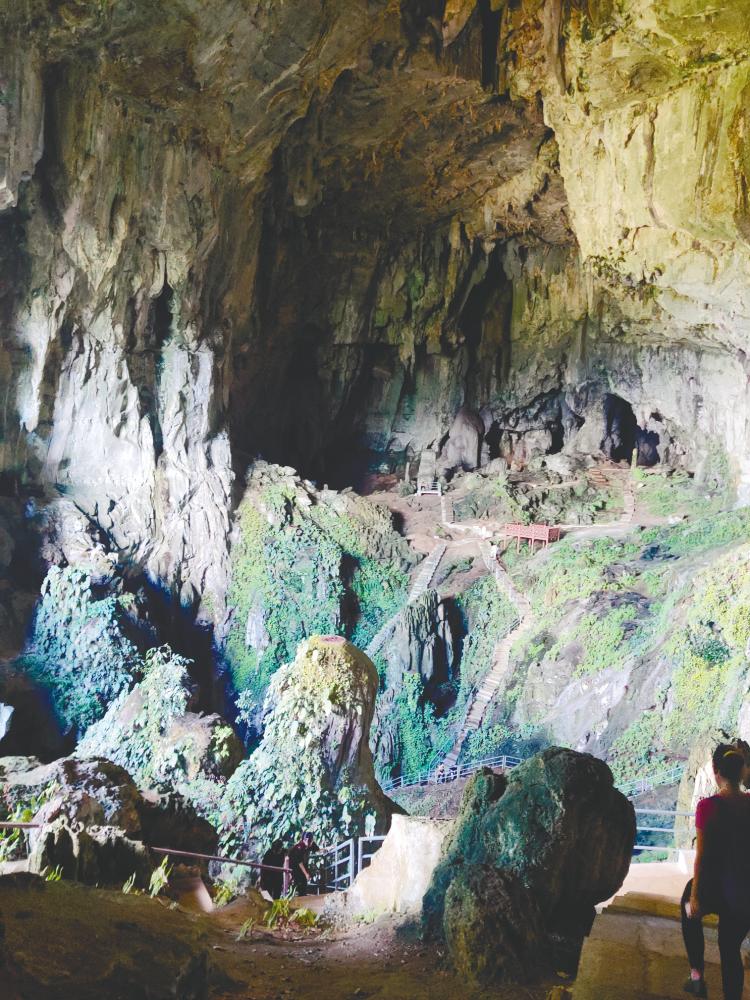 Fairy cave is unlike what you think caves might look like, with greeneries all around because of the sunlight peeking through.

If you’re planning to travel to Mulu National Park in Sarawak, one of Unesco’s World Heritage Sites, it might cost you thousands of ringgit, as you’ll need to take a domestic flight that’s only available from a few cities in Borneo, and most of the treks are lengthy, tiring and accessible only by the able-bodied.

However, did you know that the capital of Sarawak, Kuching, also has grand caves that are only 40 minutes from the city centre, which you can enter with just RM1 if you’re an adult Malaysian?

The caves are Fairy Cave and Wind Cave, which are located in Bau, a place known for two beautiful limestone caves, two important historical events, and which is a prime rock climbing destination in Kuching.

When I visited, Wind Cave was closed for renovation, but I managed to stop by the magical Fairy Cave. Legends differ according to the local communities, with the Bidayuhs believing that the stalagmites and stalactites inside Fairy Cave are villagers who had angered the gods and were turned into stone, while the local Chinese community believe that Fairy Cave is the home of Chinese deities.

For geologists, Fairy Cave is an old Jurassic limestone formation cave that dates back 170 million years ago, and is older than Mulu and Niah Caves.

The drive there was straightforward, and there are ample parking spaces. Before entering, there is a booth where the cave ranger will show you a safety video. You will need to wear suitable sports shoes, of course, as the cave is wet and slippery and dark. If you forgot to bring your shoes, you can actually rent a pair of ‘Kampung Adidas’ flip-flops at the booth.

After that, you’ll be greeted by a flight of stairs that you’ll need to climb before you arrive at the entrance of Fairy Cave.

Inside the cave, there will be two trails – the Twilight Trail and the Dark Trail. The first trail is 343m long and takes 30 minutes to complete, while the latter is 250m and takes 15 minutes to complete. The cave is very beginner-friendly, but if you’re looking for a more advanced trail, the end of Dark Trail also leads to the Gunung Kapor Summit Trail, but that requires a permit and will take roughly two hours to complete.

Like most caves, you get a gust of cold wind when you stand in front of the dark entrance, like a small warning that says: “Enter if you dare.”

Right off the bat (pun intended), you’ll need to bring some kind of light source with you, be it a physical torchlight or your phone’s built-in torchlight. As you enter the opening, you have to climb up a series of rock steps which can be quite tight horizontally as well as vertically, so make sure to hunch over, or you might hit your head on hard rocks.

Once you’re inside, the cold air starts to wane as your body warms up from the climbing, so you won’t need any jackets for the place.

If you’ve never visited a cave, you might think that a cave is just a big hollow rock with only darkness, but there’s actually a big sinkhole on the top of Fairy Cave. Diffused sunlight shining through means that it’s not complete darkness, and plants can actually grow inside the harsh cave environment, including the Begonia speluncae and ferns.

Besides the plants, plenty of wildlife is also inside the cave, including bats. However, most of the bats in Fairy Cave were hanging from the very high cave ceiling where no sunlight gets through and probably fast asleep.

If you’ve ever wondered what causes the icicle-looking rock shapes that grow downwards from cave ceilings, they are called stalactites. When the drops of water enter the cave chamber, it causes some calcium carbonate to recrystallise, and that is what forms stalactites. When the drops of water reach the floor, the same process occurs and forms a stalagmite. Over time, a stalactite joins a stalagmite to become a column.

An average stalactite grows 0.13 mm a year, with the quickest growing stalactite rate being 3mm per year, depending on how much water the cave gets. Limestone stalactites form less than 10cm every thousand years, and radiometric dating has shown that some are over 190,000 years.

As you walk deeper into the caves, you can also see phytokarst rock formation, which looks like needles sticking out from the walls. When a type of bacteria called cyanobacteria undergoes photosynthesis and consumes carbon dioxide in the presence of sunlight, they end up dissolving the limestone, and form phytokarst needles, which are rock formations which appear to be growing towards the light.

After making one round around the cave, you’ll see an arrow that points you to the Dark Trail. The trail, as the name suggests, is dark. This is when you’ll need to turn on your flashlight as the pathway is unlit, except for reflectors that will guide you along.

The Dark Trail is a test of courage, as you walk within the darkness. It is cold and a little scary, as the normal flashlight on your phone doesn’t shine very far ahead. Inside, you’ll see all the different shapes of rock formations, and maybe your mind will start playing tricks on you. However, after a short walk, you’ll reach the end of the tunnel, so the speak.

As the light of hope shines through, you end your journey by climbing up the stairs and out into the open air toward the start of the summit hike. You can enjoy the fresh air for a while before you head back inside and walk back to where you came from.

Book your trip to Kuching from this link.