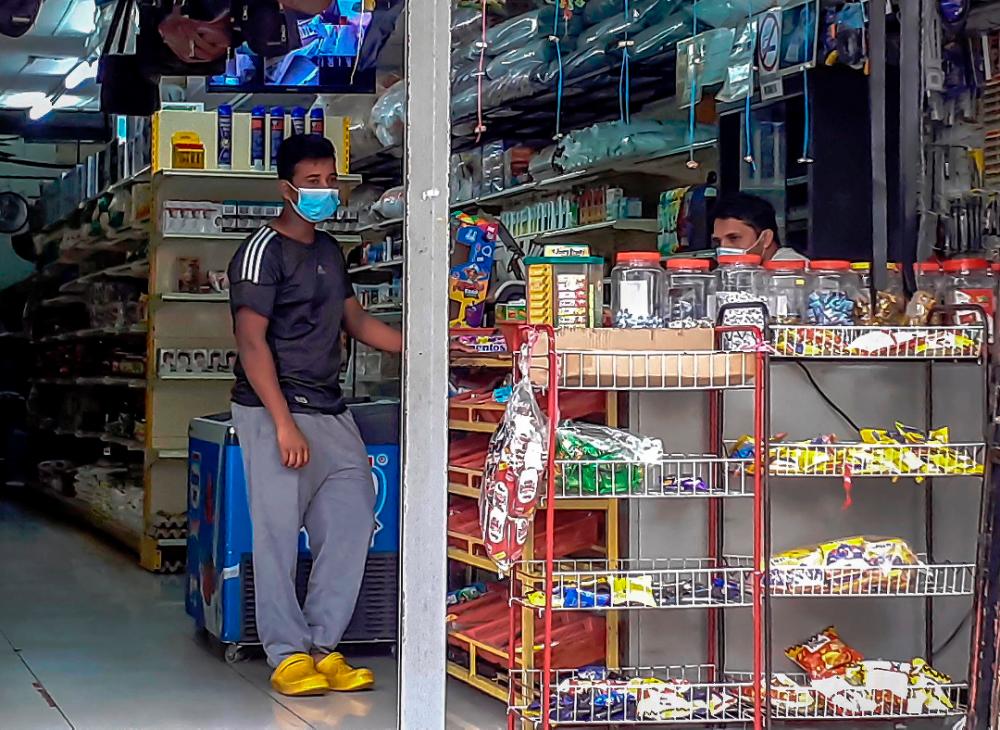 Two Bangladeshi workers tending to a shop after a semi-enhanced movement control order was lifted in Jalan Pudu, on May 30, 2020. — Sunpix by Adib Rawi

KUALA LUMPUR: A semblance of normal life has returned to Jalan Pudu and the surrounding areas after a semi-enhanced movement control order (SEMCO) was lifted on Saturday night.

However, racist remarks against the migrant community there remains unabated. They have been blamed for the spread of Covid-19 and there have been more calls to send them back to their countries of origin.

“Sometimes, when I’m on the internet, I see people posting comments suggesting that we be put in cages and sent home. That is really sad,” Ngun Hlei Iang, 32, a teacher at the Myanmar community in Pudu told theSun yesterday.

However, the community, comprising about 600 people, including about 200 women, are relieved that the SEMCO has finally been lifted.

They can now conduct their weekly prayers at a modest apartment that has been converted into a school for their children. A small section within serves as a chapel.

The SEMCO was imposed on the area on May 15 to enable the authorities to screen the residents for Covid-19 after 18 cases were detected in the area.

For now, the abuse suffered by the migrants is not immediately obvious, given the distractions of the resumption of business activities.

After a two-week lockdown, shops have reopened and the rush hour is back. But it will be a while before everything goes back to pre-Covid-19 days. For instance, banks in the area remain closed and those who have undergone health screening are busy cleaning and sanitising their apartments.

Ngun said NGOs and relief providers have been a great help during the SEMCO.

“They have been providing dry goods and diapers for our children,” she said.

The migrant community, which includes refugees and asylum seekers, have been the target of several raids over alleged violations of standard operating procedures (SOP) since the movement control order (MCO) was first imposed on March 18.

On May 25, New Humanitarian, a news agency that focuses on humanitarian issues, reported that foreigners were among 29,000 people arrested for alleged MCO violations.

For instance, more than 1,000 undocumented migrants, including 98 children, were detained in a recent raid at the Selayang wholesale market.

Ismail Sabri said the first batch of undocumented migrants will be sent back on June 6.

A total of 2,189 Indonesians are being held in an Immigration Department depot in Peninsular Malaysia and another 673 migrants of other nationalities are being held at Sabah-based depots, all of whom are awaiting repatriation.

A total of 2,623 more individuals will be sent home in two months’ time.

In Pudu, the fear of more raids remains.

Alliance of Chin Refugees coordinator James Bawi Thang Bik said the Myanmar migrants there have been advised to stay calm and obey instructions from the authorities.

“We don’t want to cause a panic,” he told theSun.

Storekeepers Abu Horya and Azad Hassan, who are from Bangladesh, are relieved that they can now go out and buy food.

“We have been surviving just on rice,” they said. “No one sent us any food.”