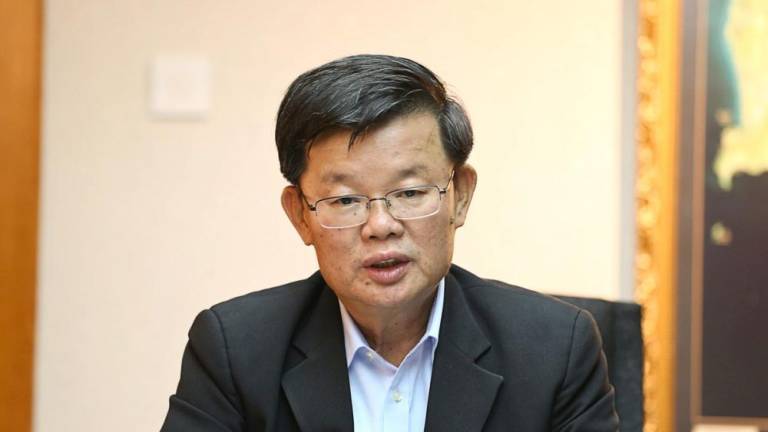 GEORGE TOWN: Chief Minister Chow Kon Yeow (pix) has urged Penangites to remain vigilant, as Penang became the fourth state to be declared a green zone, after there were no new Covid-19 cases detected in the past 14 days here, with the last active case discharged last week.

Penang joined Perlis, Kedah and Kelantan as the only states classified as a green zones, meaning that during the 14 day incubation period for the disease, there were no new positive cases.

In paying tribute to the frontliners and the community in general, Chow said that the procedures such as practicing social distancing, mandatory wearing of surgical masks, strong personal hygiene and staying home for most occasions, must continue to be upheld.

He also urged the people to respect the Conditional Movement Control Order (CMCO) measures which have been set to find a balance between a need to grow the economy and curtailing the spread of the virus.

“Our alert level must continue to be high if we want to stay ahead of the curve.”

In a related matter, northeast district police head Asst Comm Soffian Santong disclosed that the compliance rate for the CMCO is around 80% now, including at 13 supermarkets and hypermarkets in George Town.

“Traders have also implemented the new normal standard operating procedures (SOP) well – they provided hand sanitisers, limit entry into premises at any given time and take down personal details.”

People’s Rights Organisation chairman S. Raveentharan said that the authorities must also disclose the number of patients under investigation (PUI) cases in the state and if they remained under quarantine to address concerns among the people of a possible community spread.

In addition, the vulnerable groups such as foreign migrant workers, senior citizens and the low income groups need to be safeguarded or tested despite the green zone status earned by Penang, said Raveentharan.

In Penang, there were long lines at various clinics and government medical centers among foreign workers, who were compelled to undergo testing for Covid-19.

A spokesperson at one clinic, said that many of the workers began to arrive at 8am to undergo the test, which takes around 15 minutes to administer.