CG125: The other unkillable Honda

Foodstuff, beverages, knick-knacks – many of us have done business with this super-tough machine 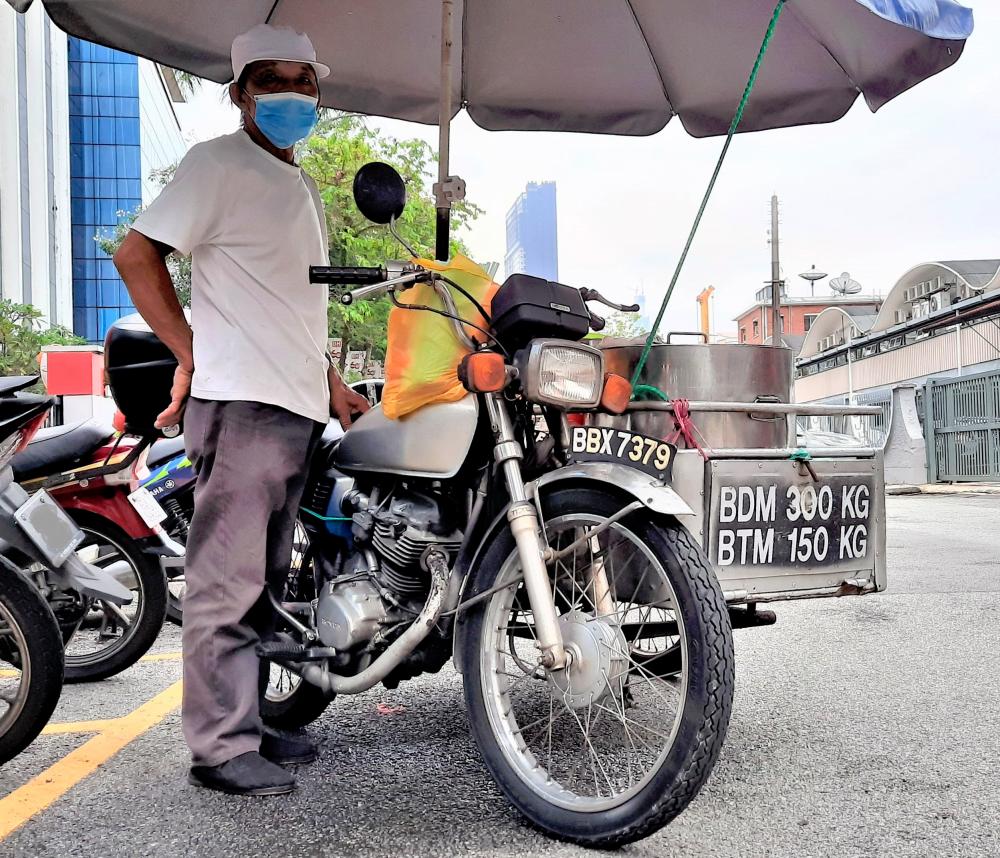 The CG125 and ‘Mr Bean’, ready for your post-lunch drinks and dessert.

THEY are quite a familiar sight in Malaysia, especially to those of us who grew up in the 1980s and 1990s. Attached to sidecars, they haul vegetables, seafood, fruits, knick-knacks as well as other foods and beverages, sold by their operators. The ones used for business are always not in good exterior condition, to say the least.

However, the Honda CG125 is the motorcycle version of the cockroach – super reliable and pretty much indestructible!

While the Honda Cub (moped) series is unanimously voted worldwide as the toughest bikes in the world, I dare say the CG125 is even tougher; they simply lose out to the Cubs in terms of price and practicality, hence the Cub’s No. 1 world-record sales figure.

But as far as abuse, misuse and neglect by its users, the robust CG125 takes them all, while gruffly performing tasks that would’ve broken many other bikes.

This one in these photos here is almost a daily fixture outside of an office building in Bangsar, Kuala Lumpur. Selling soybean juice and pudding (or tau fu fa/douhua/doufuhua), it was already there before I worked at that office in 1994 (until 2006). It is there during weekday lunch, where office workers and nearby residents buy from its owner, who told me to call him just “Mr Bean” (pix).

This CG125 was registered in 1984 and spent only a year on two wheels. In the following year, it was put on sale and was purchased by Mr Bean, who got a shop to attach a sidecar to it. From then on, it spends its life solely as a business machine.

In the mornings, it does its trade near its home in Cheras. During lunch time, it will make its way to Bangsar, puttering in Kuala Lumpur’s mad traffic at a modest speed. Driven by a four-speed manual transmission in its bomb-proof 124cc four-stroke, overhead valve, single-cylinder engine, the CG125 sometimes hauls nearly 300kg of total weight (including itselfand Mr Bean) or more.

The 66-year-old Mr Bean learned the trade from his parents who started the business in 1963. “I assisted them until I turned 18, when I got a job as a machinery mechanic. But I quit that job not long after, due to the small salary and started this business.”

The weather-beaten Cheras resident uses about 10kg of beans a day for the juice and pudding. With the business, he raised three children. He has four grandchildren now. “Number Four arrived very recently!” the grandfather proudly proclaimed.

Born out of shocking discovery

Honda Motor Co Ltd, on its global website, tells the story of the CG125: Back in the late 1960s and early 1970s, Honda’s exports to developing countries increased dramatically during the period, consistent with the growth of Southeast Asia's economies. Consumers in this region wanted practical motorcycles that could handle multiple passengers and overloading.

In order to meet the growing needs of this region, Honda exported the CS90 model in Jan 1968 and then the CB100, both with four-stroke overhead-camshaft (OHC) engines, in Sept 1969. In contrast, the company’s competitors were exporting two-stroke, 100cc models. Still, despite the Honda’s good design and build quality, Honda was losing ground to its rivals.

In response, Honda developed a model featuring its new overhead-valve (OHV) engine, exporting it as the S110 in March 1973. The real problem, however, was not so easily solved.

To solve this problem, in May 1974, two Honda engineers were assigned to conduct a “thorough research in actual markets under real-world conditions”. Takeshi Inagaki, who was in charge of creating motorcycles for developing countries and Einosuke Miyachi, in charge of design, spent a month observing motorcyclists in major cities throughout Malaysia, Thailand, Indonesia, Philippines, Pakistan and Iran. They were shocked at what they saw.

“It was normal to see a child on the tank and the wife at the back, with two to four people riding together,” Inagaki recalled, “and some people loaded vegetables, chickens and pigs onto their motorcycles. I even saw motorcycles towing loaded carts.”

The dealer situation, too, was completely different from that found in Japan. At the time, the dealer's primary responsibility was to disassemble and repair motorcycles that were not in working condition.

Customers typically brought their motorcycles in only when they had stopped running. Therefore, the concept of routine maintenance was completely foreign to the dealers and customers.

“They continued to use oil even after it had turned into goo,” Inagaki said, “and the paper filter elements in the air cleaners would become solid as a dirt wall from all the dust. The drive chains would be stretched out to their maximum adjustable lengths and were worn and torn from hitting the chain case. The examples of such abuse went on and on. One after another, we saw spectacles we'd never even imagined possible from our home base in Japan.”

It was thus apparent that due to their complex structure, the four-stoke, OHC motorcycles could not perform to their true potential in developing countries, where people subjected their bikes in the harshest conditions and the dealers were unable to provide sufficient service.

Following such market research it was concluded that Honda should develop a motorcycle that was above all practical and durable; and that it should have an engine with a maintenance-free, four-stroke design.

Immediately on their return from abroad, Inagaki and Miyachi submitted their findings to the Honda research and development (R&D) centre.

To overcome those “challenges”, Honda swiftly created the CG125 project, to be a motorcycle that was above all practical and durable; and that it should have an engine with a maintenance-free, four-stroke design. Its lightweight, short-pushrod OHV engine features a gear-driven, single camshaft structure for both intake and exhaust. The shaft is located where one would find the cam-chain housing in a more conventional OHC engine.

Among the other criteria it had to meet were:

- The engine must have excellent fuel mileage and rugged durability.

- It must be designed with an emphasis on practical, daily use, with easy maintenance being a key feature.

- It was to be developed exclusively for developing countries in which knockdown (CKD) production was also possible.

In March 1974, with the basic concept of the engine established, the development team got down to the real task of making the project work. The challenge was to develop a model exclusively for developing countries in which knockdown (CKD) production was also possible.

Inagaki recalled: "I wanted to revive Honda's image as a maker of sporty motorcycles. But at that time, the purchase of a motorcycle would have been only a dream for most people in developing countries; a real status symbol for the common citizen. A motorcycle was a treasured possession that one could finally acquire after having saved enough money. So, of course it would have to last a long time."

The 124cc OHV engine successfully answered the question of durability, employing lightweight short pushrods for higher performance and easier maintenance. It would also enhance productivity by sharing the same processing line with the OHC engine.

Two types of motorcycle frames and bodies were developed for the project: a steel plate press specification suitable for mass production at Kumamoto Factory and a pipe specification for knockdown production in various countries.

The pipe specification did not require large, expensive presses or dies, facilitating production with only a minimal investment. Moreover, it complied with the golden rule of overseas factory development; that to borrow a time-honoured Japanese saying the company could "give birth to a small child and raise it to be a big grown up." To ensure that the bike could handle the anticipated load placed on it by two to four riders, its diamond frame would be enhanced considerably.

Two types of petrol tanks were developed, making the top flat so that a child could sit on it!

To ensure successful sales in each of these countries, during the previous stage of planning several colours and stripes were prepared. Furthermore, two seat designs had been developed simultaneously – a long seat for multiple riders and a seat with a cargo carrier that would accommodate the expected degree of overloading.

The air-cleaner element was changed to washable styrofoam urethane, to withstand repeated cleanings. This design employed Honda's first dual-element structure. The outer cylinder featured a large-mesh grid, acting as a primary filter, while the inner cylinder completely filtered out dust particles greater than 20 microns in diameter. Moreover, any dust smaller than 20 microns would be completely removed by the oil impregnated within the element. This would prolong engine life and significantly improve its reliability.

Several other innovations in mechanical design, specification and manufacturing technology were incorporated into the new motorcycle, each with the goal of making it maintenance-free, durable and easy to produce. A great deal of consideration went into developing a motorcycle that people in developing countries would find easy to use and easy to own.

Fulfilling the expectations of a growing region

Development was thus complete and the motorcycle went on to a favourable reception among the representatives of several developing countries who attended a December 1974 dealers’ meeting and test ride in Thailand.

There, Honda officials demonstrated the motorcycle's easy maintenance and assembly at a dealership, where local mechanics were asked to disassemble, reassemble and inspect the motorcycle without the benefit of prior instruction.

The results were incredible; within a mere 20 minutes, they were able to reassemble the portion of the engine above the cylinder, including the new OHV mechanism. The engine started on their very first attempt!

The test ride was conducted using a measuring device that had been brought from Japan to Thailand. High-speed driving in the intense summer heat, along with high temperature testing, were conducted on the Asia Highway, which was nearly complete.

Driving overloaded in Bangkok, conducting "knocking tests" using local petrol, riding under intense heat and amid thick, choking clouds of dust were all part of the process.

Inagaki said: "Test rides of every imaginable situation were done repeatedly and soon we were confident that this motorcycle would meet the demands of the region."

The CG125 (and also a CG110 version) was now ready for their first destination – the Thai market debuted on March 1975.

The “CG” nomenclature, by the way, stands for “Cash Guarantee”.

Amazingly, the CG125 is still in production today, 45 years after its launch, in a Pakistani operations. There and also in the rest of South Asia, South America and Africa, plus its licensed and “pirated” copies in other countries, CG125s are subjected to even worse abuse and still carry on performing their painful duties.

That super-robust 124cc has changed little over the years. By now, it is quite a desirable machine in Malaysia’s classic bike scene, where they fetch quite good prices, no matter the conditions they are in.

I did ask Mr Bean a few times to sell his CG125 to me, over the years; I even offered him a replacement bike on top of some cash. He politely turned my offer down each time.

“There’s no bike that can replace it. The new bikes don’t have that ‘bone’ down their frames to attach a sidecar to. Mopeds aren’t strong enough to carry me and the heavy liquid load I sell.

“I only maintain it, doing the usual things required for a bike... servicing and replacing battery, tyre, chain, sprockets, when needed. It never gave me problems.

“I’ll stick with it, until one of us can’t do this anymore.”