Night races for the final two rounds of another successful season 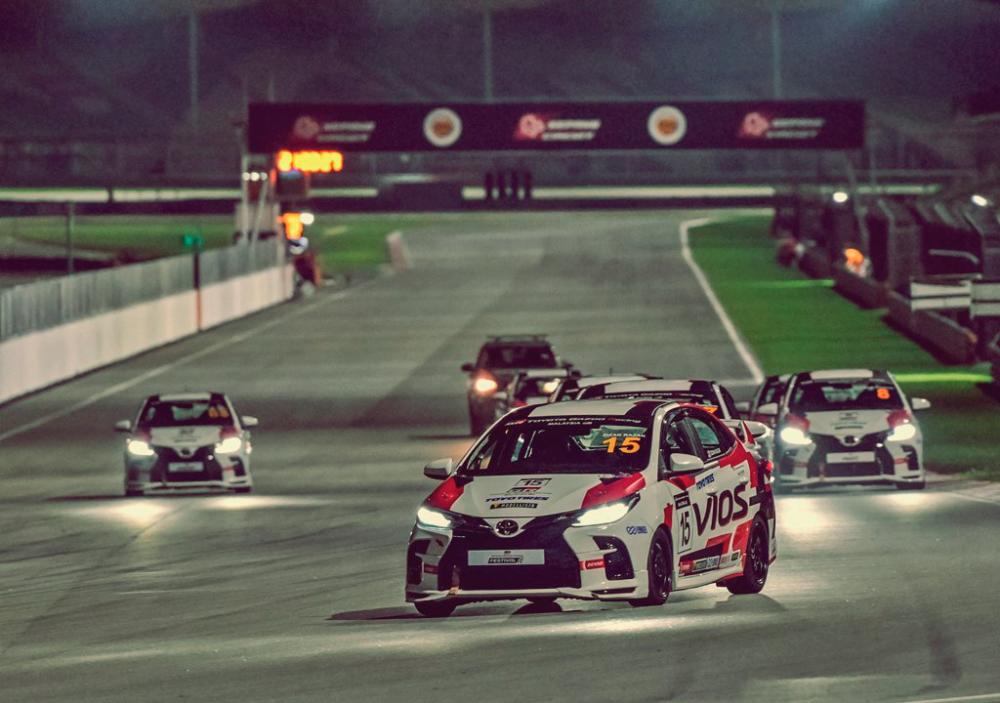 ALTHOUGH night racing has a different atmosphere with artificial lighting providing illumination of the track instead of sunshine, the action is no less intense. And with the Vios Challenge, the highlight of the TOYOTA GAZOO Racing (TGR) Festival, ending its fifth season this weekend, there is even more determined racing as drivers aim to collect valuable points in the last two races of the one-make series at the Sepang International Circuit.

The Vios Challenge, a series now well established in Malaysian motorsport, is the most lucrative motorsports event in the country, with more than a half a million ringgit in prize money offered. The overall champions of the Super Sporting and Sporting Classes will take home RM70,000 and RM50,000, respectively. So there’s a lot of incentive to do well!

The races use half of the Sepang International Circuit, referred to as the ‘North Track’. This will have a total distance of 2.706 kms. with 9 turns. Every car entered has to be prepared identically with the same performance levels (which are checked before and after each race). Therefore, it is all about driver skill, experience and strategy rather than just who has the more powerful car.

Lew had started the 20-lap race from pole position and gained an early lead of as much as 3.3 seconds ahead of Hayden. Behind the two, the battle for third was extremely intense with no less than 5 drivers trading places throughout the 20 laps.

“I got a really good start and I tried to drive very consistently to slowly pull away from the rest of the field,” said Lew. “This was my first night race experience in the Vios Challenge and I really enjoyed it. It was a lot cooler and there was more grip on the track. I really had fun!”

In the Sporting Class for amateur racers, Axle Sports’ Naquib Azlan had stayed up front after taking an early lead. Finishing second was S&D Tama Motorsports’ Tom Goh who seemed glued to the rear end of Naquib’s Vios and closing in to just 0.3 second as he crossed the finish line. In third place was privateer Mohd Shafiq Samsudin who drove impressively to prevent rival Bradley Benedict Anthony of Crestmax Motorsport from grabbing the podium spot.

23 Motors’ Abdul Miqail was the surprise of the night when he posted the fastest lap to start from pole position. But the 16-year-old didn’t sustain that quick pace and slow slipped back in the field.

“Coming into this race, I knew it was going to be a tough challenge, especially carrying a weight penalty of 55 kgs. The game plan was just to keep up with the faster cars from qualifying and with the championship at stake, I had to be mindful of my aggressiveness on the track. Tom and I had a great start and both of us managed to pull away from the rest of the field. We were, however, bumper to bumper right to the finish,” said Naquib.

In the Rookie Class for the second batch of 5 drivers who have received training in GAZOO Racing’s Young Driver Development Program, Nabil Azlan (brother of Naquib) continued his dominance to win the race ahead of Muhammad Hamdany and Muizzuddin Musyaffa who claimed second and third places, respectively.

“I had a good start and tried to manage a clean first few laps. We caught up with the Super Sporting Class drivers and that’s when things got a bit tricky. Muizzuddin was leading but he made a slight mistake and I took advantage of that. In the last 5 laps, I really had to manage my tyres to get to the end of the race,” said Nabil.

The popular Promotional Class, which has celebrities racing against each other, saw a 2-way fight between actors Zizan Razak and Shukri Yahaya from the start. The two drivers duelled throughout the race but 3 laps before the end of the 18-lap race, they collided. Damage to Shukri’s Vios forced him to retire.

Despite the damage to his car, Zizan was able to continue to complete the race as winner. 4.2 seconds behind was singer Nabila Razali, with presenter Nabil Ahmad in third place. As the Stewards determined that the collision had been caused by Zizan, he received a penalty time which demoted him to third place while giving Nabila the win and Nabil taking her place as runner-up.

“I just want to say ‘thank you’ to Toyota and to all my coaches, friends and fans. I’m quite proud of myself and this is a very memorable race for me,” said a delighted Nabila after she received the surprise news.

For Nabil, getting second place and the points that go with it put him back in contention to fight for the overall Promotional Class championship in the final round tonight. “This was my first night race in Sepang. I missed out last year’s night race as I was presenting at an event and this makes tonight’s race even more special and certainly a result to remember,” he said.

For this finale round, the festival aspect has been turned up and the entire rooftop area of the circuit’s main paddock building has been transformed into a festival ground. There are many activities for all the family and an opportunity to mingle with the celebrities who have a meet-and-greet session that has been a regular activity at every round.

Last night and tonight, there are also concerts with the crowd entertained by stage performances led by TGR racing celebrities Wany Hasrita and Nabila Razali, and a special 40-minute Rappers & Racers concert anchored by K-Clique.

Entry to the circuit to watch is free but if you cannot make it there, you can still watch the races and stage performances which will be streamed live on the Toyota Malaysia and TOYOTA GAZOO Racing Malaysia Facebook pages.