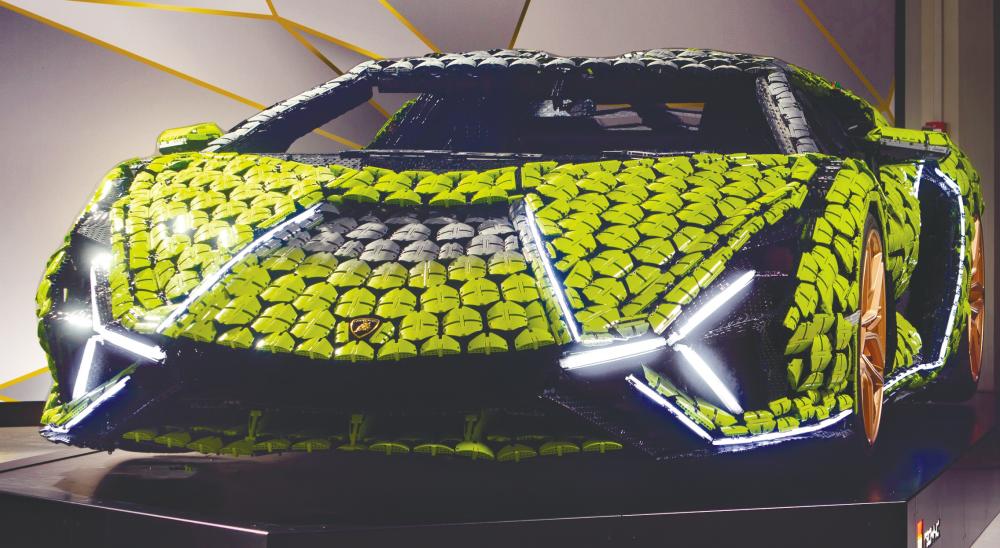 CONTINUING the partnership between Lamborghini and LEGO Technic which was established in January 2020, a Lamborghini Sian has been built with LEGO parts and is currently on display at the Lamborghini Museum in Sant’Agata Bolognese, where the sportscar company’s home in Italy is located.

The model follows the 1:8 scale LEGO Technic Lamborghini Sian FKP 37 in 2020 but is full-sized, with virtually identical dimensions as the real supercar.

More than 154 different types of LEGO pieces –were used to form the unmistakable outline of the Sian, right down to the very smallest details. With some 400,000 LEGO pieces used, the Sian model weighs 2,200 kgs.

The word “Sian” means “lightning” or “thunderbolt” in Bolognese dialect. The experts from the LEGO Group have emphasised this by making the lights and the stylish thunderbolt that flashes down the bodywork shine like the Y-shaped lights on the real car, while also producing hexagonal tail lights that can really turn on and off.

Extremely precise detailing can be seen inside the car, including a LEGO brick steering wheel decorated with the famous Lamborghini badge and the Italian flag, an instrument panel and racing seats.

It took the project team 8,660 hours to complete the model, of which 3,290 hours were spent on building it.

This is the first large-scale model by the LEGO Group to have paint-effect UV colour coating which will help to make the model longer lasting. The colour was applied by the Lamborghini paint shop to ensure that the sportscar had a fitting finish.

The Sian, which was unveiled at the 2019 Frankfurt Motor Show, is the fastest Lamborghini of all time, thanks to a unique new hybrid system which focuses on providing the highest power possible via the lightest solution. It has a V12 engine – huge for a hybrid powertrain – and a 48-volt e-motor.

The 6.5litre V12, which incorporates titanium intake valves and is uprated to 785bhp at 8,500rpm (the highest output ever from a Lamborghini powerplant) combines with the 34bhp from the electric motor.

The Sian has a claimed a top speed of over 350kph so it will be able to keep up with any other Lamborghini model. More significantly, it lays claim to having the fastest acceleration of any production Lamborghini ever – 0 to 100 km/h in less than 2.8 seconds.

Each of the 63 customers who have already paid their deposits will spend upwards of US$3.6 million (RM16m), the final price depending on the degree of customisation. 4.Kamada, Mitoma on target as Japan cruise past US