The BMW ‘Batmobile’ of the 1970s reincarnated 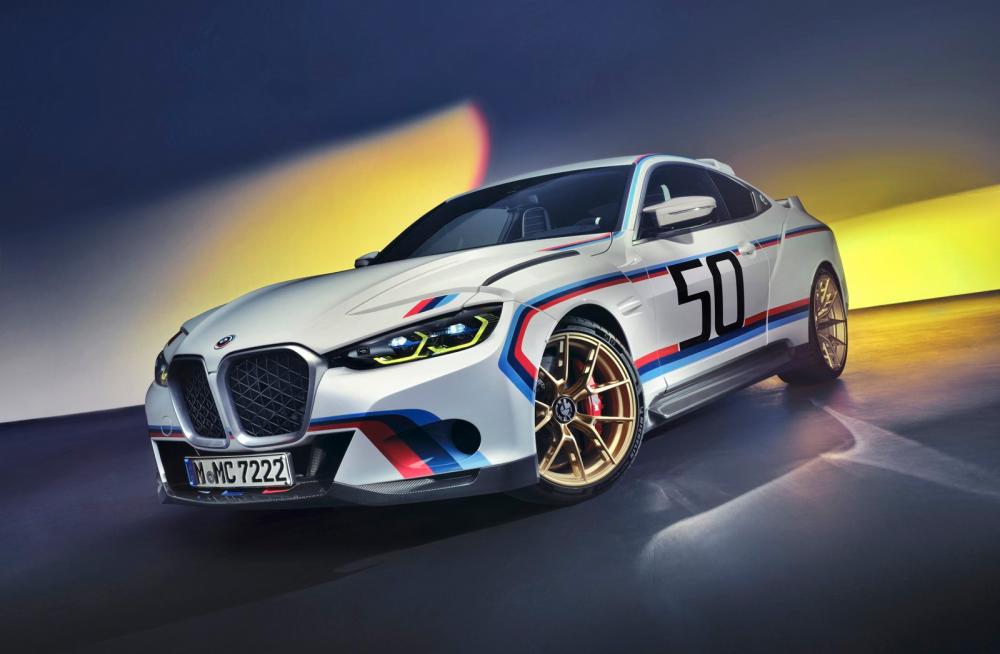 BMW M has one last present for fans to celebrate its 50th anniversary – a modern version of the BMW 3.0 CSL which became one of the most successful racing cars of its era. The legendary sportscar both for the racetrack and the road was a puristic car that appeared in the founding year of BMW Motorsport GmbH.

The racing version won the European Touring Car Championship during its inaugural season in 1973 – and repeated this title win 5 more times. The road version of the racing car which was also known as 3.0 CSL (the initials for ‘Coupe, Sport, Lightweight) had aggressive bodywork with a rear wing that got it the nickname of ‘Batmobile’.

Now BMW M will build the 21st century 3.0 CSL which will be the most exclusive special model the company has ever produced. No more than 50 units will be available so it will have the status of rarity right away.

The new BMW 3.0 CSL is the contemporary reinterpretation of all these features anchored in its model designation. Its coupe-shaped body sets traditional accents while the powertrain and suspension technology stems from the latest developments for racing cars and high-performance sportscars from BMW M.

As with the original car, keeping weight as low as possible is a priority. Today, there are many more intelligent and advanced lightweight construction techniques to use, above all through the extensive use of carbonfibre. As a result, the power-to-weight ratio of the 3.0 CSL is an impressive 2.9 kgs per hp.

With its classic coupe proportions and a traditional layout that combines a front engine and manual transmission with rear-wheel drive, the 3.0 CSL follows its historic ancestor. The distinctive air deflection elements, powerfully shaped wheelarches, a striking rear spoiler and numerous other details are clearly based on the design of the legendary coupe of the 1970s.

The BMW kidney grille has a lattice-shaped insert in a diamond structure. Its upright position relates to the front design of its historic ancestor. Like the side window surrounds, the kidney frame is finished in satin aluminium – a design feature that emphasizes the special status of the 3.0 CSL. Together with the BMW kidney grille, two generously dimensioned recesses in the front apron, reminiscent of the air intakes on the 1970s model, ensure reliable cooling of the drive and brake systems.

The BMW Laser Light headlights shine in yellow, both during the welcome scenario after unlocking the doors and when the low and high beams are activated, thus making reference to successful GT racing cars. This detail is a subtle reference to the strong connection with motorsport and BMW M GmbH’s currently most successful competition vehicle, the M4 GT3.

The 4 tailpipes of the exhaust system, arranged in an arrow shape in the centre of the rear apron and feature a particularly lightweight titanium rear silencer, also provide a striking accent. The rear lights use innovative lighting technology to generate a unique night design and a particularly vivid radiance. This is achieved by filigree laser light threads that appear to be free-floating inside the lights and create an expressive 3D effect through precise superimposition.

The forged light-alloy wheels are fitted with Michelin tyres developed exclusively for the 3.0 CSL. They bear the number 50 embossed on the tyre sidewalls, providing another subtle reference to the anniversary of the company.

Right from the very beginning the 1970s, BMW Motorsport became imprinted in fans’ memories not only due to its racing successes, but also the appearance of its cars. Just like the competition cars, the drivers’ outfits, the vehicle transporters and all other team equipment featured uniform stripes in blue, purple and red on a white background – a novelty at the time and today a globally recognized trademark.

The modern 3.0 CSL picks up on this tradition with a paint finish in Alpine white uni and an elaborately applied stripe decor in the BMW M colours. Both the base colour and the M stripes, known in technical jargon as livery, are applied largely by hand, involving an extremely high level of time and effort. In order to precisely position the livery stripes, the painters use masking by means of laser projection as well as customised contour films.

The number sequences on the doors and roof, designed in the style of early racing cars, build a bridge from the past to the present. Their design in the style of racing numbers is based on the historical model of the first BMW M car developed for touring car racing, whilst the number 50 refers to the anniversary of BMW M. Another reminder of the 1970s are the two BMW logos positioned on the C-pillar, hence directly behind the counter-swing of the side window graphic known as the ‘Hofmeister kink’.

Most powerful straight six in a road-legal BMW M car

The 3.0 CSL has been given the most powerful straight 6-cylinder engine ever used in a road-legal BMW M model. This is also a tradition: in its final stage of development, the predecessor of the same name marked a new record with an engine output of 206 bhp – not only for 6-cylinder models, but for all BMW production vehicles produced up to that point.

The engine possesses the same technological roots as the power unit of the current DTM-winning car. The 3-litre powerplant with M TwinPower Turbo technology has been further developed exclusively for the 3.0 CSL. It generates a maximum output of 560 bhp – a new record for straight 6-cylinder models from BMW M which are road-legal. Maximum torque of 550 Nm, which goes through a 6-speed manual transmission to the rear wheels.

On the race track, the driver can use the typical M linear build-up of lateral acceleration forces to steer the vehicle through bends with controlled drift maneuvers. The Active M Differential in the rear-axle transmission also ensures superior dynamics. If necessary, it prevents torque compensation between the rear wheels and, at the same time, continuously and variably builds up a locking effect of up to 100%. The Active M Differential is linked to the DSC (Dynamic Stability Control) and precisely adjusts its locking effect to the respective driving situation.

The suspension components used in the 3.0 CSL represent the spearhead of development for BMW M’s high-performance sportscars. This is the double-joint spring strut front axle and a 5-link rear axle in M-specific design, an Adaptive M suspension with electronically controlled shock absorbers, the electromechanical M Servotronic steering with variable ratio, and the M carbon ceramic brake system with adjustable characteristic curves.

Mot unexpectedly, the interior of the 3.0 CSL has extensive use of carbonfibre and other lightweight construction measures which emphasize the puristic sportscar characteristics. Instead of additional seats, the rear has two integrated helmet compartments. CFRP trim in the door panels and reduced acoustic insulation also contribute to the extremely sporty flair.

The driver and front passenger sit in M Carbon full bucket seats. The diagonal connections between the seat surface and the backrest are reminiscent of the construction principle of the lightweight seats featured in the original model. Seat height and inclination can be adjusted exclusively via a 3-stage screw linkage in a workshop. The longitudinal position can be varied manually using a lever at the front edge of the seat. In addition, the M Carbon full bucket seats also have removable headrest inserts.

However, puristic as it may be the cabin also has an exclusive image and feel. Black Alcantara seat surfaces and M seatbelts are combined with an M Alcantara steering wheel, an anthracite roof liner, black Alcantara and matt carbonfibre surfaces. Contrast stitching and other accents in white correspond with the exterior paintwork of the BMW 3.0 CSL, the model lettering of which is embossed into both the door sill trims and the seat surfaces.

The white gearshift knob symbolizes the classic form of interaction between driver and car when changing gears. The red start/stop button and the likewise red M buttons on the steering wheel are available for firing up the engine and for direct access to the car’s overall set-up.

Each car will take around three months in an elaborate manufacturing process at the external location of the BMW Group Dingolfing plant in Germany. The exclusive interior carbon fibre reinforced plastic (CFRP) components are produced by hand both in Munich and at the BMW Group component factory by specially assigned bodywork specialists.

A specific process was also conceived for the paintwork of the car, in which craftsmanship and state-of-the-art technology complement each other to provide each individual part with its characteristic colour design. In addition, a team of 30 specially qualified and experienced technicians is responsible for the configuration and assembly of the vehicles.

Due to the complexity of the processes in the manufactory, each 3.0 CSL will pass through 8 assembly cycles at just as many production stations, a procedure that takes up to 10 days in all. All in all, the extremely high proportion of individual manual work means that the time required to assemble one 3.0 CSL will be many times higher than that of a regular BMW M automobile.