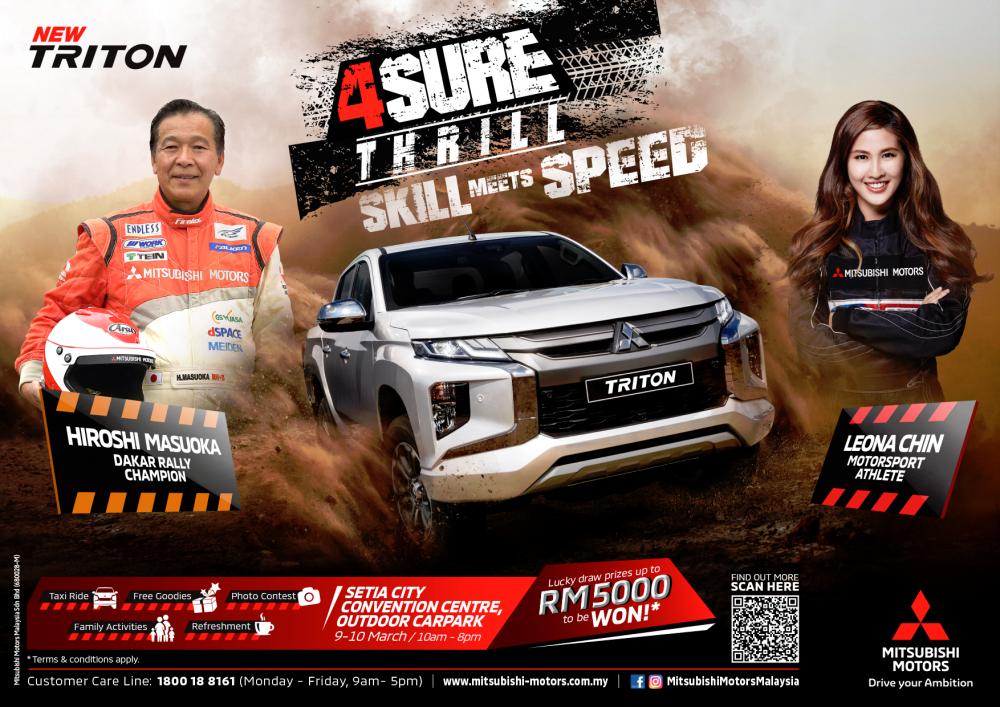 EXPERIENCE first-hand the thrills of high-speed rides and off-road driving – in the new Mitsubishi Triton pick-up truck – this weekend at the Mitsubishi Motors Malaysia’s (MMM) “Mitsubishi 4Sure Thrill” event.

There, with two-time Dakar Rally champion Hiroshi Masuoka from Japan and local motorsports personality Leona Chin as your pilots, you can also check out the Triton’s proven capabilities.

The event this Saturday and Sunday will be held at the Setia City Convention Centre’s outdoor carpark from 10am-8pm. Admission is free.

Obviously, the new Triton is the highlight of the event.

Masuoka (pix, top, at left() is the second Japanese driver* to win the Dakar Rally – in 2002, with a Mitsubishi Pajero Evolution, and in the following year, also piloting a Pajero Evolution.

Mitsubishi Motors is the most successful make in Dakar Rally history, winning the “World's Toughest Race” a record 12 times.

Besides riding with Masuoka and Chin, visitors to the event can test drive the new Triton on an off-road track with uneven surface and muddy terrain which was specially designed to test the Mitsubishi Motors Super-Select 4WD II system and off-road mode.

“The new Triton adopted four pillars under the “4Sure Handling” unique selling points – 4Sure Power; 4Sure Control; 4Sure Agility and 4Sure Safety. With these four pillars, customers are assured of a vehicle that is built to high standards and performance,” says MMM.

Visitors can also expect the following:

- First 1,000 customers to own the new Triton will receive an exclusive limited edition Thule Subterra Luggage worth RM2,000.

- Petrol card vouchers worth RM30 for the first 30 new owners who book any Mitsubishi model.

- Entertainment for the whole family.

The new Triton is priced from RM100,200 and available with a choice of five variants and four colours. The following are the variants, prices and colour options):

Prices are on-the-road without insurance (inclusive of 10% SST), only for individual private owners in Peninsular Malaysia and not applicable in duty-free zones.

*The first Japanese to win the Dakar Rally, Kenjiro Shinozuka in 1997, drove a Pajero too.