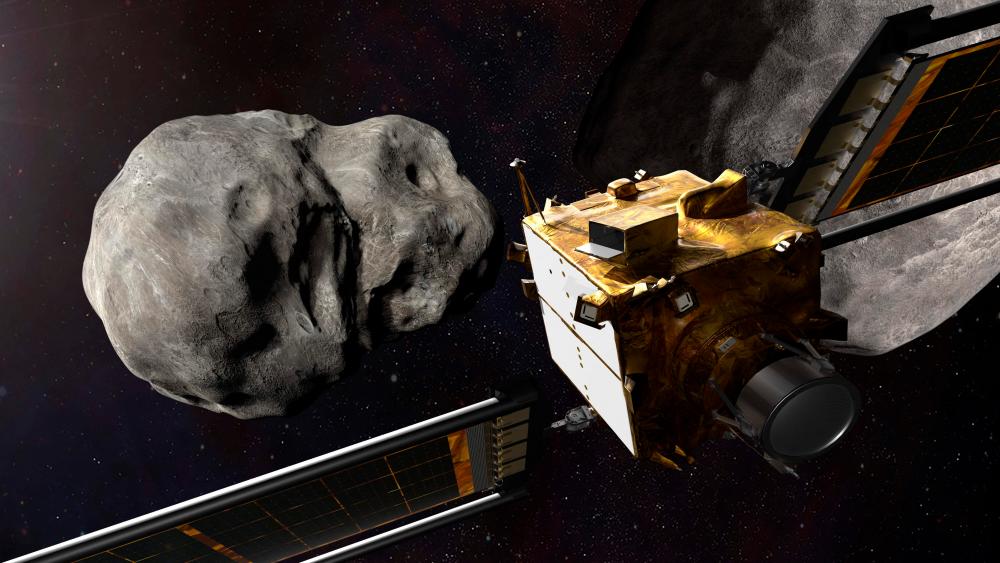 This file artist’s illustration obtained from NASA on November 4, 2021 shows the DART spacecraft from behind prior to impact at the Didymos binary system/AFPPix

PARIS: After NASA deliberately smashes a car-sized spacecraft into an asteroid next week, it will be up to the European Space Agency’s Hera mission to investigate the “crime scene” and uncover the secrets of these potentially devastating space rocks.

NASA's Double Asteroid Redirection Test (DART) aims to collide with the asteroid moonlet Dimorphos on Monday night, hoping to slightly alter its trajectory -- the first time such an operation has been attempted.

While Dimorphos is 11 million kilometres (6.8 million miles) away and poses no threat to Earth, the mission is a test run in case the world someday needs to deflect an asteroid from heading our way.

Astronomers around the world will watch DART's impact, and its effect will be closely followed to see if the mission passed the test.

Then, the European Space Agency's Hera mission, named after the ancient Greek queen of the gods, will follow in its footsteps.

The Hera spacecraft is planned to launch in October 2024, aiming to arrive at Dimorphos in 2026 to measure the exact impact DART had on the asteroid.

But scientists are not only excited to see DART's crater, but also to explore an object that is very much out of this world.

Dimorphos, which orbits a larger asteroid Didymos as they hurtle together through space, provides not only a “perfect testing opportunity for a planetary defence experiment, but it is also a completely new environment,“ the ESA’s Hera mission manager Ian Carnelli said.

Hera will be loaded up with cameras, spectrometers, radars and even toaster-sized nano-satellites to measure the asteroid's shape, mass, chemical composition and more.

NASA's Bhavya Lal said that it was critically important to understand the size and composition of such asteroids.

“If an asteroid is made up of, for example, loose gravel, approaches to disrupt it may be different than if it was metal or some other kind of rock,“ she told the International Astronautical Congress in Paris this week.

So little is known about Dimorphos that scientists will discover “a new world” at the same time as the public on Monday, Hera mission principal investigator Patrick Michel said.

“Asteroids are not boring space rocks -- they are super exciting because they have a great diversity” in size, shape and composition, Michel said.

And because they have low gravity compared to Earth, matter there could behave completely differently than expected.

“Unless you touch the surface, you cannot know the mechanical response,“ he said.

For example, when a Japanese probe dropped a small explosive near the surface of the Ryugu asteroid in 2019, it was expected to make a crater of two or three metres. Instead, it blasted a 50-metre hole.

“There was no resistance,“ Michel said.

“The surface behaved almost like a fluid,“ rather than solid rock, he added. “How weird is that?”

One way the Hera mission will test Dimorphos will be to land a nano-satellite on its surface, in part to see how much it bounces.

Binary systems like Dimorphos and Didymos represent around 15 percent of known asteroids, but have not yet been explored.

With a diameter of just 160 metres -- around the size of the Great Pyramid of Giza -- Dimorphos will also be the smallest asteroid ever studied.

Learning about the impact of DART is not only important for planetary defence, Michel said, but also for understanding the history of our Solar System, where most cosmic bodies were formed through collisions and are now riddled with craters.

That's where DART and Hera could shine a light not just on the future, but on the past.-AFP