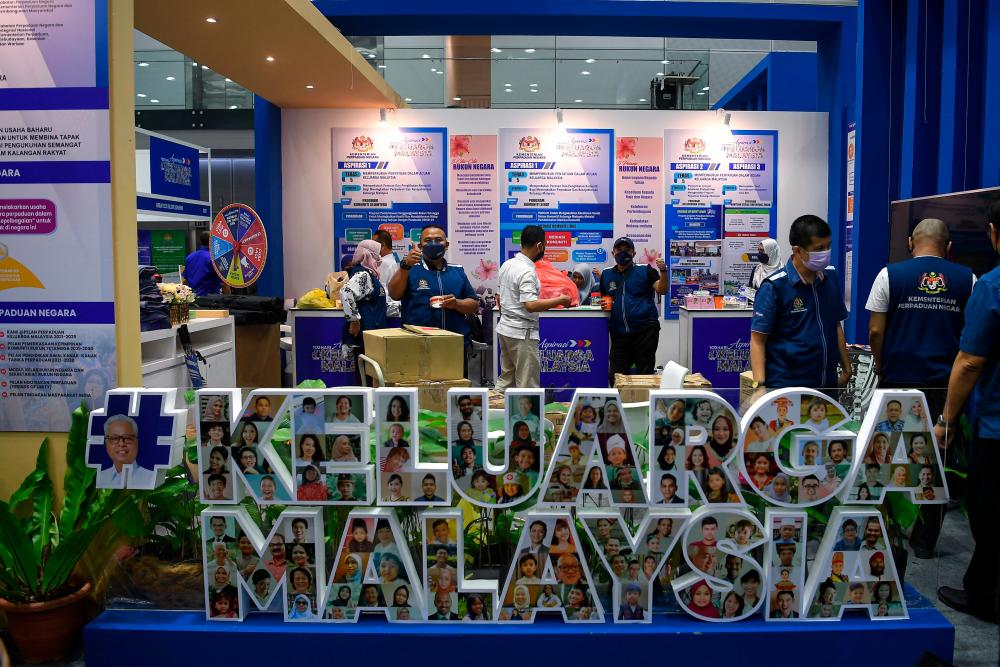 KUALA LUMPUR: The inaugural 100-day Aspirasi Keluarga Malaysia (AKM) programme, which galvanised support from all ministries and agencies as well as the private sector, ended last Sunday with an overwhelming turnout of 100,000 visitors.

The five-fold increase in public participation, which surpassed the set target of 20,000 visitors, was one of the key indicators to gauge the success of the AKM (Malaysian Family Aspirations) programme, held from Dec 9 to Dec 12 at the Kuala Lumpur Convention Centre here.

The strong show of support was beyond expectations by the organisers and the authorities, with several amendments made during the event to ensure Standard Operating Procedures (SOPs) were complied to prevent the spread of Covid-19.

However, as Prime Minister Datuk Seri Ismail Sabri Yaakob said, the 100-day report card was crucial to realise the government’s objective of enabling the people to enjoy a better standard of living, especially post-Covid-19.

The AKM was held to celebrate the success of all ministries in achieving key performance indicator (KPI) targets within 100 days.

The Malaysian Family spirit especially in facing the Covid-19 pandemic was also reflected by the participation of 31 ministries from five clusters - Senior Minister, Eonomy, Social, Security and Infrastructure clusters.

Phewiit Coffee Co. owner Nourish Hassan likened the AKM to “coffee and teh tarik” which serves as a platform to unite Malaysians.

This is because, over a cup of coffee or teh tarik, Malaysians from different backgrounds, religion and race can emerge as one family, sitting together for a chat on various issues.

“The smell of coffee elicits good feelings. It is a beautiful thing to feel the aroma and enjoy sipping your coffee, which enlightens your mood.

“Whether you are having coffee at home or with friends at a cafe, drinking coffee will help you live in the moment as it creates relaxing and positive vibes, hence forging closer ties,“ she told Bernama at the 100-day AKM programme recently.

Nourish, who runs a coffee and teh tarik business together with her husband Suhaimi Abdul Rahman or better known as Amy Search, was also involved in the AKM exhibition under the auspices of the Ministry of Agriculture and Food Industries (MAFI) and the Malaysian Pineapple Industry Board which assisted them in coffee production.

She said the Malaysian Family concept espoused by the prime minister has succeeded in strengthening the core values of inclusivity and common ground, which are among the key pillars of a family.

The Malaysian Family concept was introduced by Ismail Sabri upon his appointment as the 9th Prime Minister on Aug 21. It was conceptualised to be inclusive, transcending the boundaries of religion, race and ethnicity.

The concept, which is expected to be embraced as a family culture, has already shown positive results through the various government initiatives aimed at generating spin-off benefits for the people.

For 23-year old Najiha Amran, the Malaysian Family concept reflected Malaysia's uniqueness that is easily acceptable by the people.

Najiha, who works at Danial Haikal Couture, a boutique which showcases batikwear said, she was happy that batik was given recognition by the prime minister through the Malaysia Batik Day that was annually celebrated on Dec 3.

“Previously, batik was only worn during official functions, but in recent years, the trend has changed, with no limitations to batikwear, and the declaration of the Malaysia Batik Day would widen the usage of batik among the people,“ said Najiha, who was manning her booth during the 100-day AKM programme.

Meanwhile, a visitor to AKM, Ng Wei Loong said the programme should regularly be held in the future to allow more Malaysians to have a better understanding of government agencies.

He said the programme was the best platform for the people to gain direct assistance from the government including job opportunities.

“We usually go to government offices on official matters, and some people are rather reluctant to go to certain ministries in Putrajaya as it is far from their house.

“As such, programmes like the 100-day AKM, serve as a one-stop centre for various services, such as paying fines, seeking job opportunities or to register as Rakan Muda volunteer with the Ministry of Youth and Sports. At least, we get to know the types of assistance that benefits the people,“ he said.

Meanwhile, the organisers of the 100-day AKM proramme were slapped with a RM1,000 compound by the Ministry of Health for defying health SOPs.

“Congestion, a lack of physical distancing and no control over the number of visitors created the risk of Covid-19 transmission,“ Health Minister Khairuddin Jamaluddin was quoted as saying.

Many quarters have expressed concern over the incident as failing to observe the SOPs could trigger a spike in Covid-19 cases in the wake of global fears over Omicron, a new, highly transmissible variant of the Sars-Cov2 virus.

More worrying is despite the decline in new Covid-19 infections, the nation's new daily cases are still high especially in Selangor, which continues to record cases in four digits.

“Don’t let your guard down. The people or the government must not neglect the SOPs. Perhaps some feel that it is enough for them to wear face masks or sanitise their hands, but with the congestion at the venue, these SOPs are still inadequate.

“We are now relying on vaccine (Covid-19) as a protective shield against the coronavirus infection,“ he said.

He hopes that the government could maintain the SOPs including limiting the number of people at social events.

Dr Zainal opines that large scale events with over 300 people are not suitable under the current situation.

“We should be guided by SOPs at mosques which accommodate only 300 people at a time, while those who come later are not allowed to enter the premises,“ he said.

The programme saw the participation of 26 ministries and five agencies under the Prime Minister's Department.

A total of 31 government booths and 102 entrepreneurial kiosks were showcased. Among the main attractions were Jom Masuk IPT Keluarga Malaysia, Keluarga Malaysia Career Carnival, the discounted summons by the Road Transport Ministry and the Royal Malaysian Police, Sukan Rakyat and e-sport competitions. -Bernama