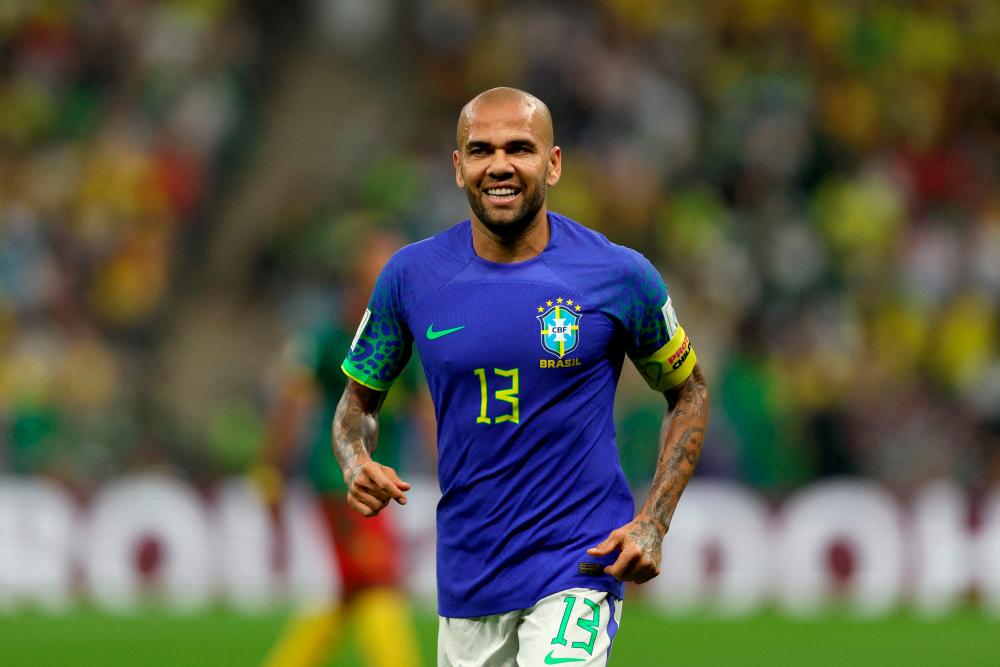 Brazil’s defender #13 Dani Alves reacts during the Qatar 2022 World Cup Group G football match between Cameroon and Brazil at the Lusail Stadium in Lusail, north of Doha on December 2, 2022/AFPPix

DOHA: Dani Alves becomes the oldest player to represent Brazil at the men's World Cup as the 39-year-old captains the tournament favourites in their final group game against Cameroon at Lusail Stadium on Friday.

Alves, who turned 39 in May and has since left Barcelona to play in Mexico, breaks the record that had been set by current teammate Thiago Silva, who is playing in this World Cup at the age of 38.

However, Alves falls short of the overall Brazilian record of Formiga, who played at the 2019 Women's World Cup aged 41.

He is also a few months younger than Canada's Atiba Hutchinson and Portugal defender Pepe, two 39-year-olds who have already played at this World Cup.

Coach Tite makes nine changes in total to the Brazil team that beat Switzerland 1-0 on Monday to clinch qualification for the last 16, with Eder Militao and Fred the only players retained.

Neymar is still sidelined with the sprained ankle he suffered in the favourites' opening 2-0 victory against Serbia.

Brazil need a draw to be certain of winning the group and facing South Korea in the last 16.

Cameroon coach Rigobert Song brings in Vincent Aboubakar up front to captain his side, while Nicolas Moumi Ngamaleu starts wide on the left and it is all change in central defence as Christopher Wooh and Enzo Ebosse both come in.

Devis Epassy continues in goal after Andre Onana was dropped for unspecified disciplinary reasons for Cameroon's last game, a 3-3 draw with Serbia.

The Indomitable Lions have to win and hope Switzerland do not beat Serbia in the other Group G game being played simultaneously if they are to advance to the last 16.-AFP