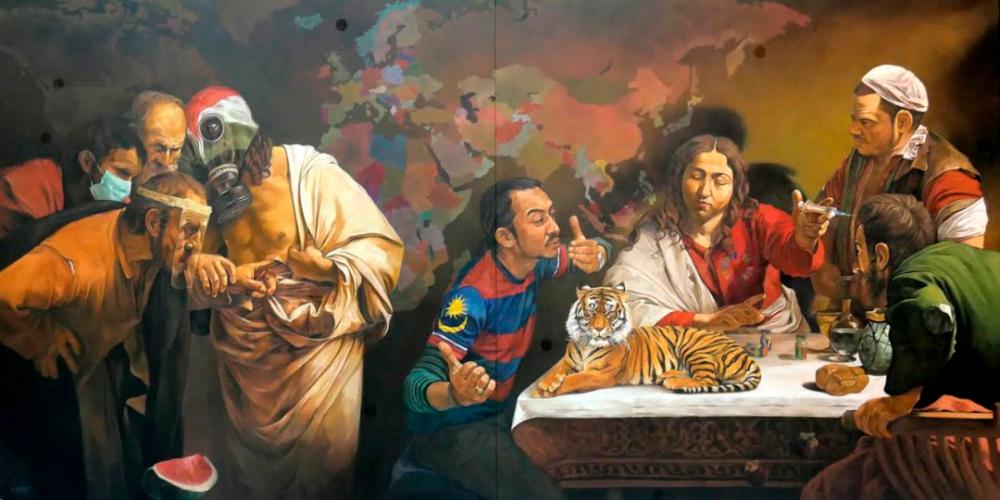 FOR the purist, a piece of art captures emotions that a photograph can never do.

While this is still up for debate, Ali Nurazmal Yusoff is already tickling the senses with his realism pieces.

Ali, an alumnus of the fine arts faculty of Universiti Teknologi Mara, uses oils and canvas, a medium he says gives life to his subjects.

But he has a higher objective, and that is to get as close as possible to the soul of Malaysian society.

As a sign of the times, his latest piece focuses on the challenges posed by the Covid-19 pandemic as Malaysia marks her 64th Merdeka Day. The piece, aptly named Appetite for Destruction, has him as the protagonist. It is a self-portrait of him in a Jalur Gemilang T-shirt with an assortment of characters in face shields and wielding syringes of Covid-19 vaccines.

He said it is an “echo” of the cover After Caravaggio, a study of the great artists of the Renaissance.

“The ‘me’ in the portrait is asking questions ... is this necessary? Is the vaccine real?” he told theSun.

Also in the painting is the Malayan tiger to portray the unseen fear of the coronavirus.

“My objective is to ignite a conversation, which is the function of art,” he explained.

Ali said that as Merdeka Day approaches, he begins to reflect on each and everyone’s responsibility to contribute to the country, and as an artist, he is doing it through his works.

“This painting is to tell us to question our current situation. Will we be free (from the Covid-19 pandemic)?” he said.

Ali said the piece, that he started working on in January was an extension of his previous works, the Imitation Master series. This is a body of work centred on Renaissance-era masters such as Caravaggio, Leonardo da Vinci and Michelangelo.

As expected, such “distortions” of the masterpieces (or as Ali puts it a merging of ancient pieces with Malaysian elements) draw criticisms.

But he is unperturbed. “The symbols that I use are easily accepted and understood, and I want to see how Malaysian art will fare at the international level,” he explained.

Ali also sees it as a way to promote Malaysian art globally.

But it should also not come as a surprise that the 43-year-old artist is prepared to take his works to a level that few would dare. With 20 years’ worth of brush strokes under his belt, he has probably earned the licence to be playful.

For instance, when the Pokemon Go craze gripped Malaysians few years ago, he produced the Imitation Master After Caravaggio, adding several characters from the Japanese mobile game and his own favourite minions.

Ali said that apart from conveying a message, he also hopes to entertain his audience. Afterall, I also see myself as both an entertainer and a storyteller,” he said.

However, there is a downside. Some of the messages he tries to convey are lost on his audience.

While the adventurous side of him is prepared to push the boundaries – his Imitation series is testament to this cheeky side of him – Ali remains a traditionalist at heart.

He does not believe in shortcuts. “You can’t depend solely on talent, even if you have it,” he said. For him, hard work is the formula to success.

“Build a foundation, hone your skills and learn the history of art. Only then can you position yourself as an artist,” he said.

For this Merdeka, Ali hopes to convey the message of patriotism among Malaysians. “I believe we have a responsibility to contribute to our country,” the artist, who emerged champion in the Olympic Art Competition at age 15, said.

“I do it with my paintings.”