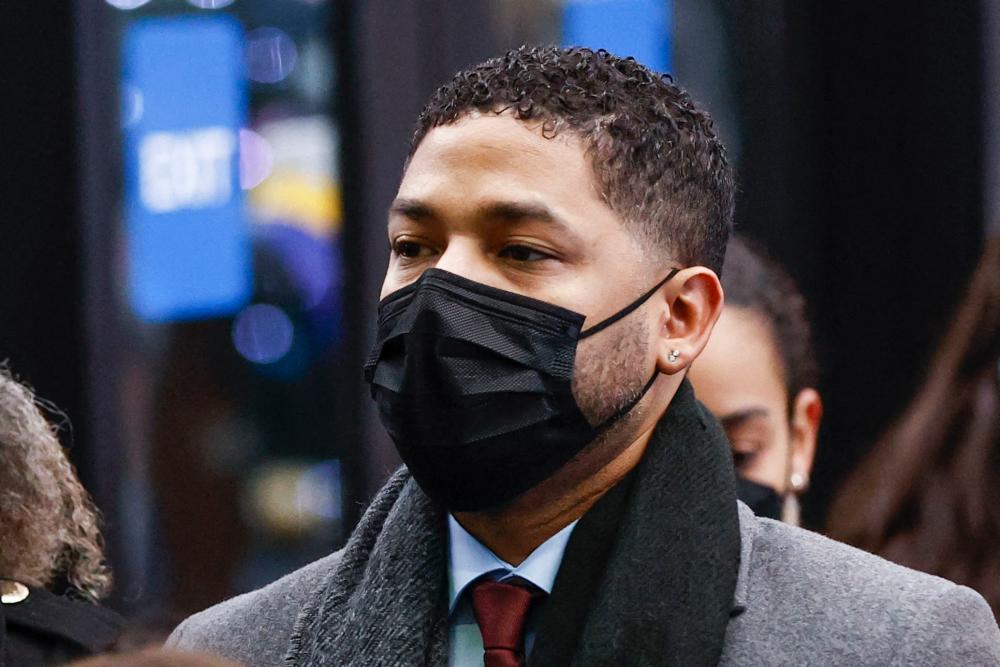 CHICAGO: US actor Jussie Smollett(pix) on Monday denied fabricating a hate crime against himself during his trial in Chicago, a case that sparked a wave of national outrage.

The former “Empire” star was accused in 2019 of orchestrating a hoax racist attack in the Midwestern city to gain publicity and secure a bigger paycheck.

“There was no hoax,“ the 39-year-old said while on the stand, local media reported. He denied having spoken about a staged attack at any time with his alleged accomplices.

Smollett, who had been one of the main cast members on “Empire,“ reported to police in January 2019 that he was attacked in the middle of the night by two masked men while walking near his home in Chicago.

But police eventually said he staged the whole thing, based on examination of CCTV images and the cell phone data of Smollett and his two alleged attackers.

Smollett, who is gay and African-American, maintained his innocence in the face of a damning public account from authorities of their case against him.

They accused him of sending himself a threatening letter -- complete with homophobic and racial slurs -- and hiring two acquaintances, brothers Olabinjo and Abimbola Osundairo, to stage the attack while invoking Donald Trump’s “Make America Great Again” slogan.

He allegedly paid the brothers $3,500 to participate in the ordeal.

The case got even weirder when Cook County prosecutors eventually dropped the initial 16 felony counts against him in March 2019.

The city did, however, send a letter to Smollett's attorneys, asking the actor to pay the $130,000 cost of overtime work related to the police investigation.

He was indicted again in February 2020 by a grand jury in Cook County, which handles crimes in Chicago, on six counts of disorderly conduct related to the alleged false reporting.

Smollett's trial started last Monday with very limited media coverage, and the judge prohibited televising the majority of the proceedings.

The prosecutors argued that Smollett had wanted to advance his career and accused the “Empire” production studios of not reacting after receiving a threatening letter.

But Smollett's lawyers said he had been attacked by two men, one of them homophobic, motivated by money.

The actor faces a maximum sentence of three years in prison.

In much-anticipated testimony, Smollett -- who was dropped from “Empire” once the allegations against him surfaced -- said the $3,500 payment had been for a training and nutrition program developed by one of the Osundairo brothers.

He and his lawyer then acted out the fight, with Smollett playing the role of the attacker. He later said his employers at the time had pressured him into an interview with a major television station.

The Osundairo brothers testified last week they had been paid to stage the assault.

Abimbola Osundairo said Smollett “talked about how the studio was not taking the hate mail seriously.

“Then he proceeded to tell me he wanted me to beat him up,“ he said. “I was supposed to punch him but not too hard.”

Abimbola Osundairo said he agreed because he felt indebted to Smollett, who had helped him get a small stand-in role on “Empire.” He also denied having a romantic relationship with Smollett.

Olabinjo Osundairo said Smollett had explained the plans for the attack in detail, including what insults to say.

The brothers had flown to Nigeria, where they are from, after the alleged attack. They were arrested on their return to Chicago in mid-February.

The indictment and closing arguments are expected later this week, and then the jury will deliberate.

The episode revived America's long-simmering debate about how just the country's criminal justice system really is, whether the rich get off easy -- and whether prosecutors should have so much discretion.-AFP