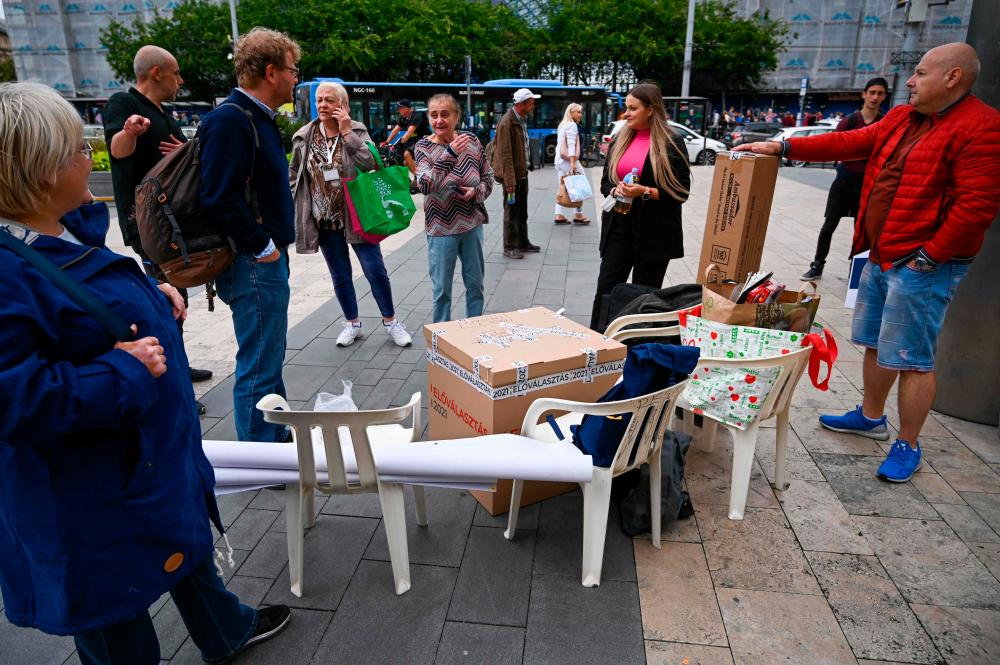 LMP and volunteers close the polling station at Nyugati square in Budapest on September 18, 2021 during the first round of the Hungarian opposition primaries/AFPPix

BUDAPEST: Hungary's first-ever primary elections to find a candidate to challenge right-wing Prime Minister Viktor Orban got off to a rocky start on Saturday with voting suspended due to what organisers said was a suspected cyber attack.

After years of bickering and a string of landslide losses, the once-factious opposition has come together with one common goal -- to push the long-serving leader from power in elections next year.

But voting was suspended just two hours after it started -- with “masses of voters” already casting ballots -- after a system crash with organisers suspecting a cyber attack.

One of the organisers, Gyorgy Magyar, told Hungarian television channel ATV that they would need 36 hours to investigate the matter.

Opposition leaders blamed Orban and the government for an attack, while Budapest mayor Gergely Karacsony -- himself looking to be the one chosen to take on Orban -- also pointed to IP addresses of Chinese origin that were identified.

“No matter what attack comes or where it comes from, there is no force capable of stopping this historical process,“ the six-party opposition alliance said in a statement.

Voting is expected to be able to resume on Monday.

The alliance, set up last year, is made up of a diverse cast of political parties: leftist, liberal and formerly far-right.

They accuse 58-year-old Orban -- who came to power in 2010 and regularly clashes with Brussels over migration and rule-of-law issues -- of endemic corruption and creeping authoritarianism.

Now they hope the new primary system will be their path to defeating his Fidesz party, Hungary's largest.

“The opposition can only compete with Fidesz if they are in a single bloc too, we’ve learned that the hard way,“ Antal Csardi, a candidate for the green LMP party, told AFP.

Electoral changes brought in under Orban handed Fidesz powerful parliamentary “super majorities” in 2014 and 2018, despite winning less than half of the vote.

The primaries allow opposition voters to select single candidates to take on both Orban himself as well as Fidesz rivals in each of Hungary's 106 electoral districts.

Over 250 candidates are standing in the primaries nationwide that are scheduled to run until September 26, with voting taking place online and in-person.

If required, a run-off for the prime ministerial candidacy will be held between October 4-10.

Polls so far indicate an unpredictable parliamentary election next April for the first time since Orban came to power.

“Despite the ideological cleavages between the opposition parties, for most of their voters, next year’s election is simply about whether Viktor Orban goes or not, nothing else,“ Daniel Mikecz, an analyst with the Republikon think-tank, told AFP.

Despite their differences, the five prime ministerial candidates at last Sunday's televised primetime debate -- the first of three -- were mostly on the same anti-Orban page.

But some cracks in the alliance have appeared. In June, former far-right party Jobbik broke ranks by voting for a controversial anti-LGBTQ law proposed by Fidesz.

Still, the parties hope to build on their success at municipal elections in 2019 when they first applied the strategy of uniting against Fidesz.

That delivered the alliance surprise wins in Budapest and several regional cities in what was seen as the first blow to Orban’s self-styled “illiberal” system.

Karacsony, a liberal who won the Budapest mayoralty thanks to cross-party support, said he “expects to win” the race to take on Orban.

“I can best integrate and hold together this diverse opposition.”-AFP 2.Body of fisherman missing for a week found