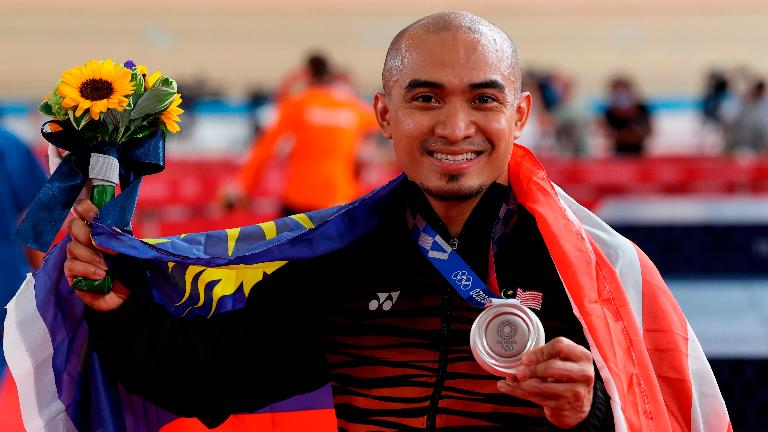 Silver medallist Malaysia’s Mohd Azizulhasni Awang poses with his medal after the men’s track cycling keirin final during the Tokyo 2020 Olympic Games at Izu Velodrome in Izu in Japan on Sunday. – BERNAMAPIX

KUALA LUMPUR: What an incredible journey it has been for national track cycling ace Datuk Mohd Azizulhasni Awang.

From riding a normal bicycle around his village and turning the hills and dirt roads into training grounds, the 33-year-old father-of-two can now proudly proclaim himself an Olympic silver medallist.

Azizulhasni, nicknamed ‘The Pocket Rocketman’, is now the country’s most successful track cyclist – having won a silver and a bronze in four straight Olympic appearances since the 2008 Beijing edition.

He is also the first cyclist in the country to get on the Olympic podium.

The silver medal he won in the keirin event on the last day of the 2020 Tokyo Olympics today is also the best achievement of his career, after winning bronze in the same event at the 2016 Rio edition before becoming keirin world champion in Hong Kong eight months later in April 2017.

The athlete from Dungun, Terengganu can also be of the fact that he is just one of two Malaysians to have managed to win Olympic silver medals in individual events besides national badminton legend Datuk Lee Chong Wei (Beijing 2008, London 2012, Rio 2016).

His success and dedication in making Malaysia proud on the world sports stage saw him being crowned the 2017 National Sportsman.

Apart from his sacrifices, the courage shown by the holder of a Master’s Degree in Sports Management at Deakin University, Melbourne, to try something new also revealed his hidden potential.

His first coach, Rozimi Omar, who died in 2015, was the one who told Azizulhasni to focus on the track arena, even though he was capable of competing in many other events, including the BMX and MTB.

He and his late coach often travelled from Dungun to Kuala Lumpur to participate in a series of races at the Cheras Velodrome, which was demolished in 2017 and, at that time, he did not have the proper equipment to compete on the track.

Azizulhasni was once given RM100 by his mother to compete in the National Championships in Kuala Lumpur in 2002 and he went on to win the gold medal in the Under-15 category with a borrowed bicycle.

The sacrifices he made as a teenager led to him being admitted to the Bukit Jalil Sports School, where his talent and potential became more pronounced.

Before long, he was roped into the national team and he then began to make a name for himself at the 2008 Asian Track Championships - winning the keirin gold medal and 200m sprint.

Not even a horrific injury he suffered during the final leg of the World Cup Series in Manchester, England in 2011 where his calf was skewered by a 20-cm splinter could dampen his spirit to soldier on.

Remarkably, he got up to remount his bike and finish third (bronze), with the splinter still through his leg.

At the Asian Games, he won gold in sprint and silver in team sprint at the 2018 Jakarta-Palembang edition.

Azizulhasni bagged the silver when he pipped Dutchman Harrie Lavreysen, the winner of the gold medal in men’s sprint, at the finish line. – Bernama