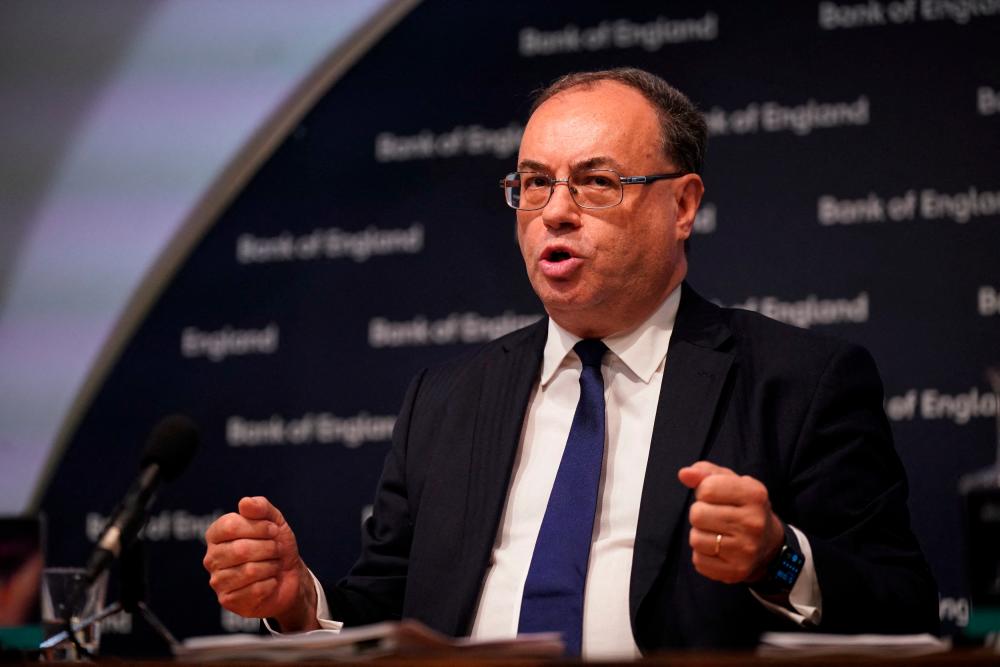 LONDON: Britain will sink into a lengthy recession later this year as inflation rockets even higher, the Bank of England (BoE) forecast on Thursday (Aug 4) as it unveiled the biggest interest rate increase since 1995.

The move comes as Britons endure a cost-of-living crisis that has dominated the race to succeed Boris Johnson following his resignation as prime minister.

The BoE's Monetary Policy Committee voted 8-1 to lift its key rate by 0.50 percentage points to 1.75%, it said in a statement.

Most policymakers felt that a “more forceful policy action was justified” than in previous meetings to combat rampant inflation fuelled by rocketing domestic energy bills.

The BoE is the latest central bank to ramp up its rates as countries around the world battle decades-high consumer prices that have soared since Russia invaded Ukraine in February.

“I have huge sympathy for those who are struggling and are asking why we’re making it even harder,” bank governor Andrew Bailey said at a news conference.

“All I can say is the alternative is worse,” he said.

UK inflation was predicted to peak this year at just over 13%, reaching the highest level since 1980. The BoE's chief task is to keep inflation close to a target of 2.0%.

The bank said wholesale gas prices have nearly doubled since May due to Russia restricting supplies to Europe, warning that this will “exacerbate” the fall in real incomes and further increase inflation in the near term.

The bank now anticipates the UK economy will enter a painful recession in the fourth quarter that will last until late 2023.

The UK economy is expected to shrink by up to 2.1% in size from its highest point, according to the forecast.

“Winter is coming, and it’s shaping up to be an absolute horror show for the UK economy,” said Laith Khalaf, analyst at AJ Bell, an investment platform.

“Make no mistake, 0.5% is a historic interest rate rise, but it is overshadowed by the abysmal economic forecasts produced by the Bank of England,” Khalaf said.

UK inflation had already jumped to a four-decade high of 9.4% in June.

“Our job is to make sure that this inflation, created by the crisis, isn’t still around in two, three years,” said BoE deputy governor Ben Broadbent.

The BoE rate increase met expectations but the British pound sank 0.7% versus the euro and dollar as dealers fretted over the gloomy outlook.

Added to the picture, UK energy regulator Ofgem is due to ramp up domestic electricity and gas prices again in October, just ahead of the colder northern hemisphere winter.

Separately, Ofgem warned on Thursday that Britons face a “very challenging winter ahead”, adding its energy price cap will now be reviewed every quarter instead of every six months.

Bailey said he had “huge sympathy” for households facing rising borrowing costs but “I’m afraid the alternative is even worse, in terms of persistent inflation.”

Feedback from business leaders and the BoE’s own surveys showed inflation pressure building in the labour market because of a severe shortage of jobs candidates, he said.

“The shocks to UK headline inflation just keep coming thick and fast,“ said Brian Coulton, chief economist of Fitch Ratings. “This will probably not be the last 50bps move.”

Analysts at Citi, meanwhile, predicted two more 25 basis-point rate increases and then a cut in a year's time.

Investors priced in a 25-basis-point rise in interest rates at the next BoE meeting in September.

The British central bank has now raised rates six times since December. Thursday's move was the biggest since 1995.

Meanwhile, th BoE looks set to become the first major central bank to sell some of the government bonds it purchased during more than a decade of quantitative easing, with a £40 billion sales programme likely to start next month.

The BoE’s Monetary Policy Committee said on Thursday it was “provisionally minded” to start sales in the second half of September, subject to economic and market conditions and a confirmatory vote at its next meeting on Sept 15.

As part of Thursday's announcement, the BoE said it would set up a new weekly 7-day short-term repo facility to keep market rates close to its Bank Rate.

“Other central banks with hefty balance sheets will be watching on with interest at the BoE’s pioneering move,” HSBC economists Liz Martins and Simon Wells said. – Reuters