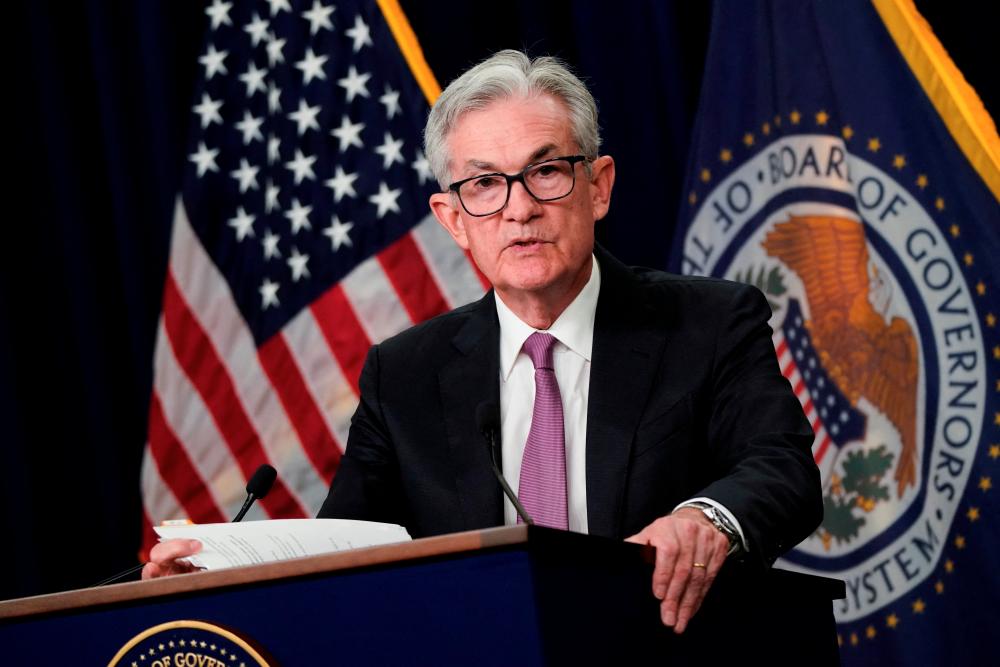 Powell speaking at a news conference following a two-day meeting of the Federal Open Market Committee in Washington yesterday. – Reuterspix

HONG KONG: The Hong Kong Monetary Authority today (July 28) raised its base rate charged through the overnight discount window by 75 basis points to 2.75%, hours after the US Federal Reserve (Fed) delivered a rate increase of the same margin.

Hong Kong’s monetary policy moves in lock-step with the United States’ as the city’s currency is pegged to the greenback in a tight range of 7.75-7.85 per dollar.

The Fed raised the benchmark overnight interest rate by three-quarters of a percentage point. The move came on top of a 75 basis point increase last month and smaller moves in May and March, as the Fed stepped up efforts to cool inflation.

Fed chairman Jerome Powell told a news conference following the rate announcement that he did not believe the US economy is currently in a recession but that it is softening.

“Today’s move is further admission from the Federal Reserve that it was too generous with its monetary policy in 2021 and that it is trying to reverse things quickly,” said Michael Ashley Schulman, chief investment officer at multi-family office Running Point Capital Advisors.

Also yesterday, most Gulf central banks lifted their main interest rates by three quarters of a percentage point, moving with the Fed as their currencies are pegged to the dollar.

The Central Bank of Kuwait, the only one of the six Gulf Cooperation Council (GCC) countries that ties its currency to a basket rather than just the dollar, raised its key discount rate by 25 basis points (bps) to 2.5%.

The Saudi Central Bank returned to moving in parallel with the Fed after it raised rates by 50 bps last month, deviating from the Fed's move as it faces lower inflation than the rest of the Gulf.

“Inflation in the region is lower than in the US and so the same magnitude of monetary tightening is not required in the region. This is especially true for the GCC countries that introduced a fuel price cap,” Malik said.

The central bank of the UAE, the only GCC country that does not have a fuel price cap, said this month it expected inflation at 5.6% for 2022.

The Central Bank of Oman, the remaining GCC country, is widely expected to follow with a similar move.

“Our forecasts are already assuming some headwinds to non-oil economic activity and credit demand in the GCC from the fast pace of interest rate hikes in this cycle, especially as they build cumulatively,” Malik said. Playing with matches is dangerous

3.One killed in landslide as another typhoon nears Japan

5.Another ‘Ismail’ creates history at UNGA, delivers speech in BM