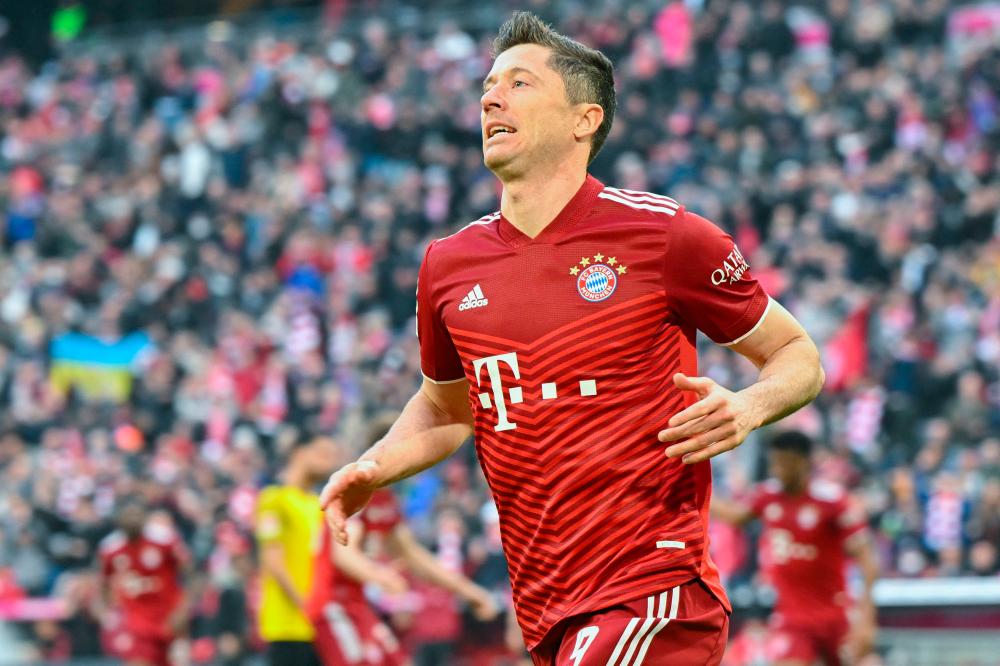 BERLIN: Robert Lewandowski(pix) banged in his 35th league goal on the final day of the Bundesliga season Saturday as Bayern Munich contradicted reports their top-scoring striker could join Barcelona this summer.

“’Lewy’ has a contract until June 2023,“ Bayern director Hasan Salihamidzic said before Saturday’s 2-2 draw at Wolfsburg.

“There have been no conversations between Bayern Munich and other clubs. Our position is clear.”

Bayern insist Lewandowski will stay, yet German media outlets claim the 33-year-old has refused to sign an extension and wants to join Barcelona for next season.

A crisp Lewandowski header from a Thomas Mueller cross put Bayern 2-0 up after defender Josip Stanisic netted his first Bundesliga goal for the visitors.

Wolfsburg clawed their way back as Danish forward Jonas Wind scored, then veteran striker Max Kruse levelled for the hosts.

Erling Haaland signed off his final appearance for second-placed Borussia Dortmund in a 2-1 home win over Hertha Berlin.

The Norwegian star is set to complete a long-awaited move to Manchester City for next season.

Haaland equalised from the penalty spot in the second half to cancel out Ishak Belfodil's early goal for Hertha at Signal Iduna Park.

The defeat pushed Hertha into 16th, which means a relegation play-off against the team which finishes third in the second division, currently Hamburg.

There were dramatic scenes in Stuttgart where Japan midfielder Wataru Endo scored a stoppage-time winner to seal a 2-1 win over Cologne.

The win saw Stuttgart claw their way to 15th and guaranteed survival next season.

Stuttgart striker Sasa Kalajdzic made amends for having a first-half penalty saved by heading in the resulting corner 26 seconds later.

Cologne equalised when veteran French striker Anthony Modeste headed in his 20th goal of the season until Endo struck.

Stuttgart fans stormed the pitch at the final whistle to kick off the celebrations.

Cologne finish seventh to qualify for the Europa Conference League.

Union Berlin will play in the Europa League next season after finishing fifth after Nigeria striker Taiwo Awoniyi netted twice to seal a 3-2 win.

Union raced into a 2-0 lead as Grischa Proemel gave the hosts an early lead before Awoniyi converted a penalty.

Bochum roared back as Simon Zoller headed in a goal, then Eduard Loewen levelled before Awoniyi grabbed a late winner.

Arminia Bielefeld joined Greuther Fuerth in being relegated from Germany's top flight despite a 1-1 draw at RB Leipzig, who finished fourth and qualified for the Champions League.

Brazil defender Tutu and Colombia striker Rafael Borre hit the net as Eintracht Frankfurt tuned up for Wednesday's Europa League final against Rangers with a 2-2 draw at Mainz.-AFP 1.Grab: Price fluctuations result of fewer drivers on the road

4.S. Korea to resume 136 flights on 22 international routes from June