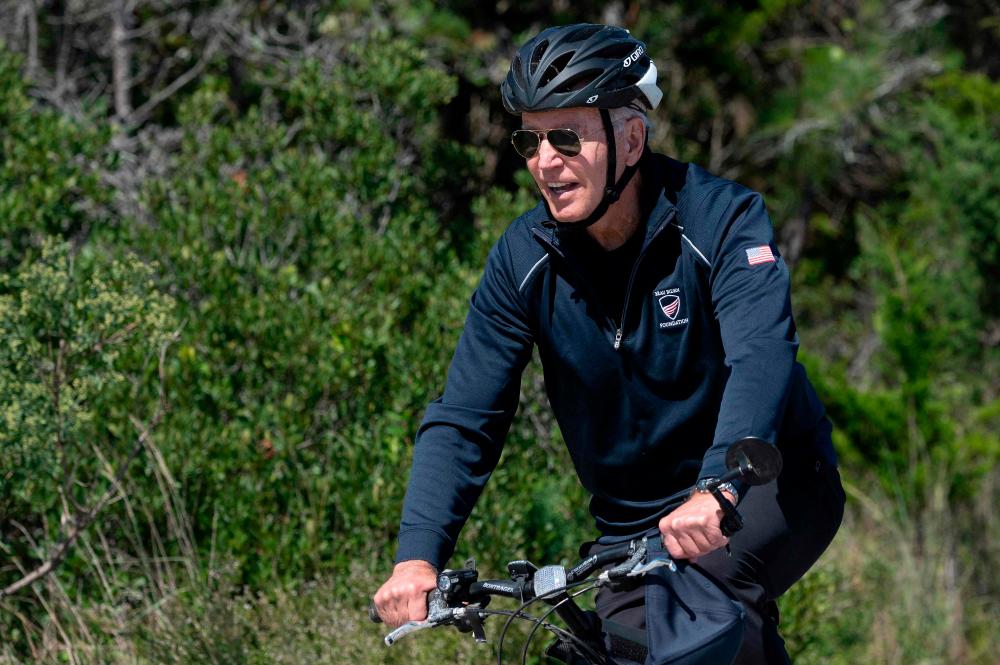 US President Joe Biden rides his bike through Cape Henlopen State Park in Rehoboth Beach, Delaware, on September 19, 2021. US President Joe Biden has requested early talks with French President Emmanuel Macron, France said on Sunday, in an apparent effort to mend fences after a row over a submarines contract sparked rare tensions between the allies/AFPPix

PARIS: The United States and Britain sought Sunday to smooth tensions with Paris over a new security pact with Australia, with US President Joe Biden requesting early talks with his French counterpart Emmanuel Macron.

The announcement of the defence alliance, and Australia's related decision to tear up a deal to buy French submarines in favour of American nuclear-powered vessels, sparked outrage in Paris, with Macron recalling France's ambassadors to Canberra and Washington in an unprecedented move.

But on Sunday British Prime Minister Boris Johnson tried to downplay France’s concerns about the deal, saying the pact was “not meant to be exclusionary... it’s not something that anybody needs to worry about and particularly not our French friends”.

Biden has requested a phone call with Macron, French government spokesman Gabriel Attal said, which would happen “in the coming days”.

“We want explanations,“ Attal said, adding that the US had to answer for “what looks a lot like a major breach of trust”.

The recall of the ambassadors to Australia and the US -- for the first time in the history of relations with the countries -- was “to show how unhappy we are and that there is a serious crisis between us”, French Foreign Minister Jean-Yves Le Drian said Saturday.

“There has been lying, duplicity, a major breach of trust and contempt,“ Le Drian told France 2 television.

Australian Prime Minister Scott Morrison on Sunday rejected the accusation that Canberra had lied, saying he had raised concerns over the now-scuppered subs deal “some months ago”.

“I think they would have had every reason to know that we had deep and grave concerns,“ he told reporters in Sydney. “We made very clear that we would be making a decision based on our strategic national interest.”

The French contract to supply conventional submarines to Australia was worth Aus$50 billion ($36.5 billion, 31 billion euros) when signed in 2016.

“His statement is inaccurate,“ she said during a visit to Niger. “We were never informed of Australia’s intentions.”

En route to New York on Sunday, Johnson told reporters that Britain and France have a “very friendly relationship”, which he described as being of “huge importance”.

“Our love of France is ineradicable,“ he said.

But although France has not recalled its ambassador to Britain, Le Drian's explanation for why was stinging.

“There is no need. We know their constant opportunism. So there is no need to bring our ambassador back to explain,“ he said in the France 2 interview.

Of London’s role in the pact, he said: “Britain in this whole thing is a bit like the third wheel.”

A source at France's defence ministry said Paris had cancelled a meeting set for this week between Parly and her British counterpart Ben Wallace.

In London, a Ministry of Defence source said they could neither confirm nor deny the cancellation.

Biden announced the new Australia-US-Britain defence alliance, widely seen as aimed at countering the rise of China, on Wednesday.

North Korea on Monday warned the deal could trigger a “nuclear arms race” in the region.

“These are extremely undesirable and dangerous acts which will upset the strategic balance in the Asia-Pacific region and trigger off a chain of nuclear arms race,“ state media KCNA quoted a foreign ministry official as saying.

China has also reacted angrily, describing the deal as an “extremely irresponsible” threat, and warning the Western allies they risked “shooting themselves in the foot”.

Paris’ fury at what it sees as a “stab in the back” threatens long-term diplomatic repercussions.

Le Drian said NATO would have to take account of what has happened as it reconsiders strategy at a summit in Madrid next year.

France would now prioritise developing an EU security strategy when it takes over the bloc's presidency at the start of 2022, he added.

French European Affairs Minister Clement Beaune has hinted that the row could affect Australia's chances of making progress towards a trade pact with the EU, its third-biggest trading partner.-AFP